Battle of the fat-fetish restaurants 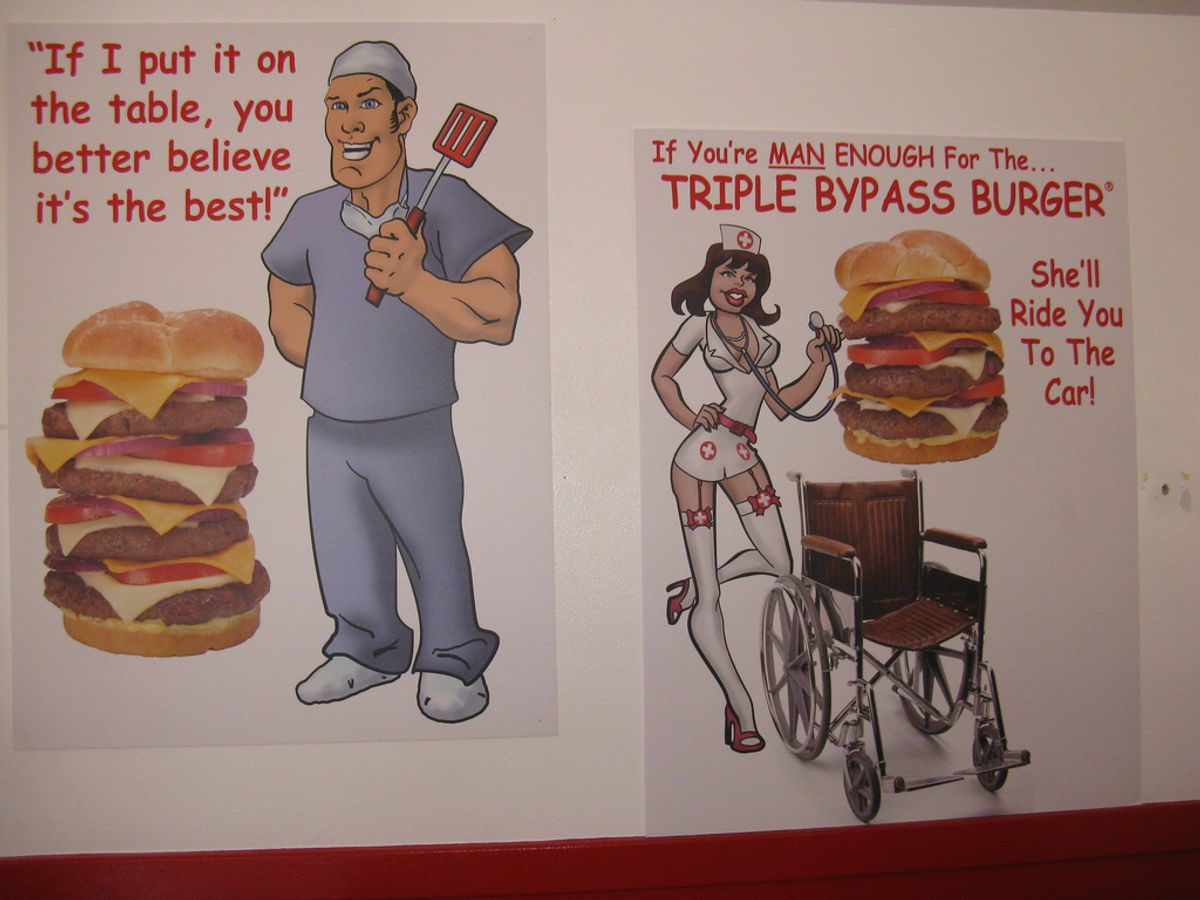 To call something the saddest news of the month this early in February isn't saying much, but I suspect the gloom I feel after reading reports of a lawsuit between two American fast food restaurants will last at least through Presidents' Day.

The Heart Attack Grill in Chandler, Arizona ("A Taste Worth Dying For") is suing Heart Stoppers Sports Grill in Delray Beach, Florida for stealing its ideas. The Heart Attack Grill, whose menu features single through quadruple bypass burgers (one beef patty for each bypass), "flatliner fries" deep fried in pure lard, unfiltered cigarettes, and Jolt Cola, filed a lawsuit against Heart Stoppers that, according to SlashFood.com, "outlines about 30 ways Heart Stoppers is similar, including signs with EKG heart monitors on them, waitresses dressed as nurses and offers of free food to patrons weighing more than 350 pounds."

Yes, that's right, free food for people who weigh more than 350 pounds. The Quadruple Bypass Burger packs an estimated 8,000 calories (which presumably doesn't include a side of flatliner fries), and this, enough calories for four full days, is free to anyone who weighs over 350 pounds.

I'm not interested in whether Jon Basso, the "brains" behind The Heart Attack Grill, is a marketing genius or whether Heart Stoppers copied Heart Attack and I'm not even interested in the obvious question of why we would ever need more than one of these restaurants. I'm interested in that fact that we still believe that limiting unhealthy food somehow impinges on our freedom, and that we still have this defiant need to go overboard as a means of asserting our independence and/or "sticking it to the man."

The true perversity of The Heart Attack Grill is that the same tactics that are supposed to scare people away from unhealthy food are actually encouraging them to buy it. Salon recently covered two public health campaigns focused on education, graphic anti-soda ads on YouTube and the posting of calorie contents on the menus of chain restaurants. By most accounts, the effects of these tactics are minimal. And here we have restaurants that call their menu items "bypasses," offer you a wheelchair when you're done eating, and use defibrillators as dining room decor, and this doesn't repel customers, it attracts them.

If I open a restaurant called Healthcare Crisis and offer an Obesity Epidemic Burger with a side of marshmallow sauce, will I get sued?