Snowpocalypse now! A storm of media hype, that is

The storm system gripping the Northeast has been unprecedented -- in hyperbole 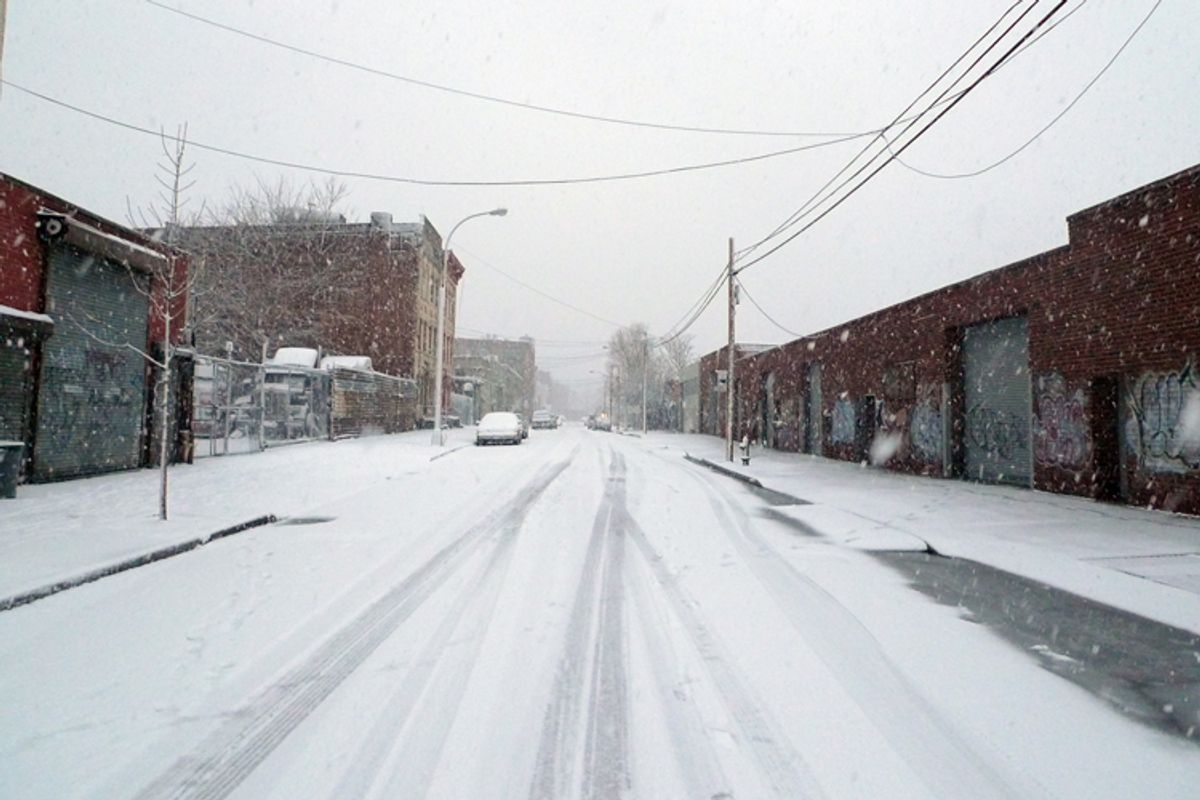 Batten down the hatches! Load up on canned goods and weaponry! Call your high school flame and tell him you never stopped loving him! Because the storm system that has gripped a goodly portion of the nation this week has been unprecedented -- IN HYPERBOLE.

That's right. It's February. And here in the northern, western hemisphere, we are having ...  weather. We're not saying you might wind up eating your kin, but  why take chances? My New York area is expected to get a not too shabby 10 to 15 inches today. And then the snow WILL RIP OUT YOUR CHILDREN'S BRAINS.

Seriously. Look at this guy.

Has something so cold ever inspired a response so overheated?

The news-grabby allure of atmospheric conditions, like fires and traffic tie-ups, is nothing new. But as reliably as the media is dying, the need to use whatever tools are at our disposal to get your attention is increasing. Gone are the days of simple storms and blizzards. Oh no, look outside. It's a Michael Bay movie out there, people. Don't believe it? Believe the headlines, then.

After last week's admittedly historic pummeling, ABC News noted Obama bravely trying to govern amid what the commander in chief himself dubbed a "Snowmageddon."  The Star Tribune, observing that we are this week in the throes of the second massive storm of the winter, has already dubbed the deluge "Snowmageddon, the Sequel," while the Associated Press is calling it "Snowmageddon II"  Electric Boogaloo!

And competing for end-of-the-world metaphor dominance this winter, there's another contender: the "snowpocalypse." Though the term has, as Sarah Wheaton pointed out in the New York Times recently, been floating around like a fluffy white crystallized flake for a few years now, the harsh conditions of this winter have created a perfect storm of colorful language and panic. It's a snowtastrophe! A snowlamity! Snowvastation! Snowgency! Snowmination! Snownami! SnOMG I'm having a snogasm! Snotorious BIG!

Now, snowdämmerung, I'm a let you finish. But 1978 had one of the best blizzards of all time. Of all time! That February deluge, which dumped over 27 inches on the Northeast, knocked out power for days in certain environs and caused approximately $520 million in damage. Or check out the winter storm of 1996, which dumped 4 feet of snow in some places, killed 154 people and caused a billion dollars in damages.

And still, the planet will not SPIN INTO THE SUN.

This winter's weather is extreme, expensive and inconvenient, to be sure. And all this snow hype isn't merely the product of a few overexcited goofs at the Weather Channel. The entertaining if eager terminology this year is more than anything the product of clever social networking, where a funny phrase can go viral faster than my building super can dig out our front walkway.

But amid the bons mots and the childlike thrill of an excuse to be whisked on a magic white carpet from the dull routines of the day to day, there also is indisputably an annoying to possibly dangerous encouragement of WHY ARE YOU NOT FREAKING OUT YET? Is there a difference between preparation and panic? When supermarkets are picked clean and newscasters warn that a "LOOMING STORM LIKELY TO BURY" us, I say maybe we've gone the latter route.

Yeah, it's bad. But I'm sorry to be the one to tell you this -- you're probably going to have to nut up and go to work tomorrow. It's snow, not locusts and frogs. Or as our own Canadian native Thomas Rogers said via e-mail this morning, "Back home, we have a name for this kind of weather. It's called Wednesday." Perhaps predictably, the most accurate response to the whole powdery hype machine this winter has come from an outside source. Writing yesterday in the UK Guardian, Richard Adams summed it all up in one easily tweetable phrase. Snoverkill.