Our human rights vs. The Others

The same people who cheered severe human rights abuses by the U.S. object to far less when done by others 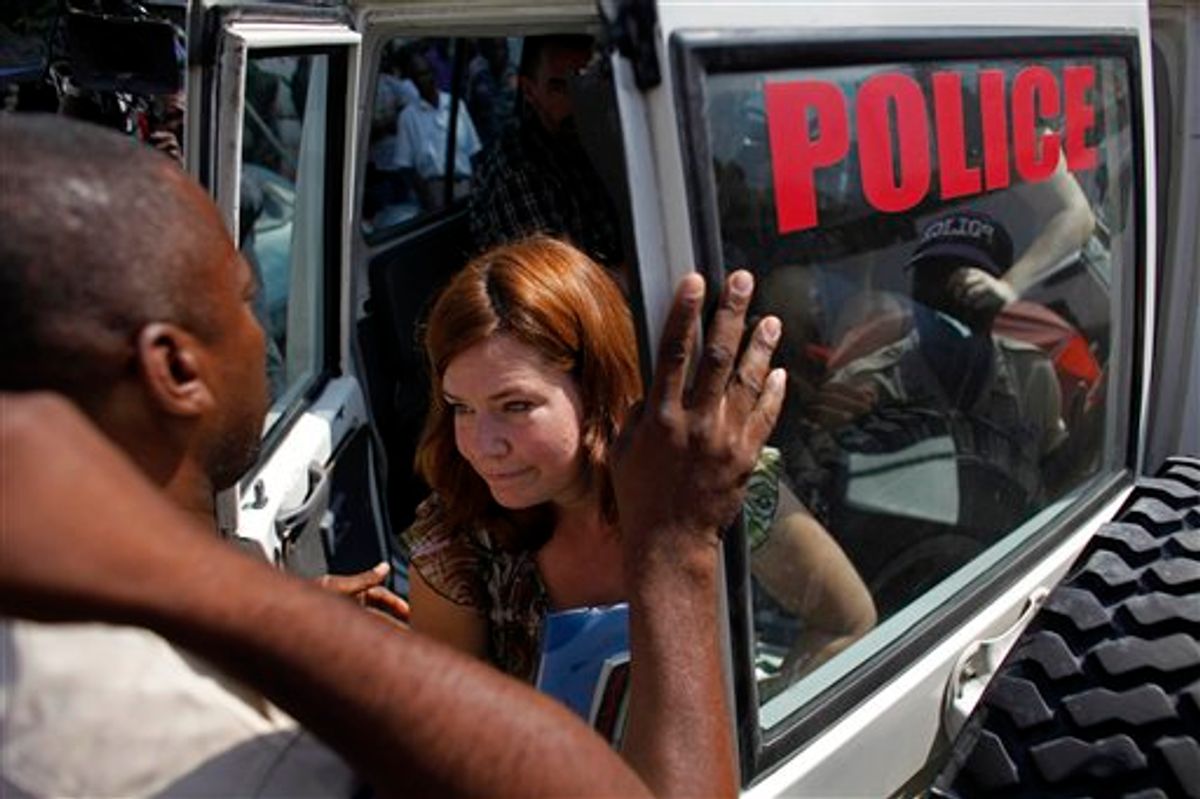 FILE - In this Monday, Feb. 8, 2010 file photo, Laura Silsby, one of the 10 Americans arrested while trying to bus children out of Haiti, exits a police car outside the court building in Port-au-Prince. A closer look at Silsby's life shows that the adoption fiasco follows a predictable pattern surrounding the 40-year-old businesswoman and mother of two: Her big promises and big dreams often give way to questionable actions and frequent legal action. (AP Photo/Javier Galeano, file) (AP)
--

Ten American Baptists were arrested two weeks ago in Haiti on charges that they exploited the chaos in that country by attempting to smuggle 33 young Haitian children across the border without permission -- either to bring them to a life of Christianity or (as some evidence suggests) to filter them into a child trafficking ring.  National Review's Kathryn Jean Lopez is deeply upset by the plight of at least one of the detained Americans, Jim Allen, whom she contends (based exclusively on his family's claims) is innocent.  Lopez demands that the State Department do more to "insist" upon Allen's release, and -- most amazingly of all -- complains about the conditions of his detention.   She has the audacity to cite a Human Rights Watch description of prison conditions in Haiti as "inhumane."  Lopez complains that Allen was waterboarded, stripped, frozen and beaten has "hypertension," was shipped thousands of miles away to a secret black site beyond the reach of the ICRC and then rendered to Jordan allowed to speak to his wife only once in the first ten days of his confinement, and was consigned to years in an island-prison cage with no charges denied his choice of counsel for a few days (though he is now duly represented in Haitian courts by a large team of American lawyers).

You know what else Human Rights Watch vehemently condemns as human rights abuses?  Guantanamo, military commissions, denial of civilian trials, indefinite detention, America's "enhanced interrogation techniques," renditions, and a whole slew of other practices that are far more severe than the conditions in Haiti about which Lopez complains and yet which have been vocally supported by National Review.  In fact, Lopez's plea for Allen is surrounded at National Review by multiple and increasingly strident attacks on the Obama administration by former Bush officials Bill Burck and Dana Perino for (allegedly) abandoning those very policies, as well as countless posts from former Bush speechwriter (and the newest Washington Post columnist) Marc Thiessen promoting his new book defending torture.  Lopez herself has repeatedly cheerled for Guantanamo and related policies, hailing Mitt Romney's call in a GOP debate that we "double Guantanamo" as his "best answer" and saying she disagrees with John McCain's anti-torture views, while mocking human rights concerns with the term "Club Gitmo."  And National Review itself has led an endless attack on the credibility of Human Rights Watch, accusing it of anti-Israel and anti-American bias for daring to point out the human rights abuses perpetrated by those countries.

What's going on here is quite clear, quite odious, and quite common.  It goes without saying that because he hasn't yet had a trial, Allen could be perfectly innocent, or he could be guilty of some rather heinous crimes -- just as is true of Guantanamo detainees held for years without charges or a trial (indeed, even with Haiti virtually destroyed under rubble, Allen -- unlike GITMO detainees -- is receiving full due process).  Why would National Review -- which endorses far worse abuses when perpetrated on Muslims convicted of nothing -- take up the cause of an accused child smuggler and possible child trafficker, and suddenly find such grave concern over detainee conditions?  Or, to use their warped vernacular, which equates unproven accusations with guilt, why would National Review be advocating for the rights of child kidnappers and child traffickers?  Because, as a Christian, Allen is deemed by National Review to deserve basic human rights, unlike the Muslim detainees whose (far worse) abuse they have long supported [in stark and commendable contrast to National Review, Southern Baptist leaders are also demanding that the Obama administration do more to secure the release of Allen and his fellow prisoners, but they at least have standing and credibility to do so, as the National Association of Evangelicals, the Southern Baptist Convention, and the leading Southern Baptist ethicist all condemned Bush policies as "torture" which "violates everything we stand for," although they did that quite belatedly].

All of this is reminiscent of the single greatest act of self-satire I encountered since I began writing about politics:  in September, 2006, three Indonesian Christians were convicted in a regular Indonesian court of a brutal terrorist attack that left 70 Muslims dead, and they were sentenced to death.  Michelle Malkin and various other right-wing agitators -- who not only cheered on every radical Bush/Cheney denial of due process and punishment without trial for Muslims, but demanded even more extreme measures -- righteously took up the cause of these Christian Terrorists, expressing "grave doubts raised over the fairness of the trial," citing "irregularities" in the trial they received, and even calling upon the "International Criminal Court in Geneva" to intervene -- seriously (this behavior from GOP Sen. Mel Martinez, in a different case, was quite similar).  The very same people who have been demanding for years that Muslims be imprisoned for life, tortured and killed with no trials or charges of any kind suddenly become extremely sensitive to the nuances of due process and humane detention conditions -- they start sounding like Amnesty International civil liberties extremists -- the minute it's a Christian, rather than a Muslim, who is subjected to such treatment.  Lest anyone think these glaring double standards are driven more by nationality than religion, National Review -- along with most of their comrades -- supported the full denial of due process in the case of Jose Padilla, a U.S.-born American citizen and Muslim who was tortured to the point of insanity, and it now does the same with U.S.-born American citizen and Muslim Anwar al-Awlaki, whom the U.S. is currently trying to assassinate.

The only thing worse than someone completely indifferent to human rights abuses when committed by their own government is someone whose concern for such matters is dictated by the religion or other demographic attributes of those whose basic rights are being denied.  That's the same mentality that leads our media to treat American journalists held by Evil Foreign Governments for a few weeks under dubious circumstances as screeching headline-making news, while ignoring almost completely those foreign (Muslim) journalists held by the U.S. Government for years without charges.  How many Americans know and are outraged about Iran's detention of Roxana Saberi, all while being completely ignorant of the numerous Muslim journalists held for years by the U.S., including a Reuters photojournalist, Ibrahim Jassam Mohammed, finally released last week after being held by the U.S. military for 17 months with no charges and even after an Iraqi court ordered him released?  It's the same mentality that allows the U.S. Government, with a straight face, to issue reports condemning as "torture" the very techniques we used, to protest indefinite detention, extra-judicial killings and lawless eavesdropping when engaged in by other countries, and to demand that other countries prosecute their war criminals and torturers in the name of "the rule of law" (while our own are feted on TV shows and given regular newspaper columns to glorify the torture and other war crimes they implemented).

Would you rather be an American wrongfully accused of child trafficking even in the post-earthquake Haitian justice system (complete with lawyers, access to courts, and full due process), or a Muslim wrongly accused of Terrorism by the U.S. Government (and put in a black hole for years with no rights)?  To ask the question is to answer it.  The primary duty of a citizen is to protest bad acts by their own government.  If you're acquiescing to or even endorsing serious human rights abuses by your own government, then it's not only morally absurd -- but laughably ineffective -- to parade around as some sort of human rights crusader when it comes time to protest the treatment of one of your own, however you might define that.  It might produce some soothing feelings of self-satisfaction, but nobody will remotely take that seriously, nor should they.

UPDATE:  Numerous commenters have argued that factors other than religion -- such as American exceptionalism, race and Terrorism fears -- play a role in these double standards.  That's undoubtedly true.  As usual, it's self-blinding, adolescent tribalism that is driving this behavior (my group is better), which is what I meant when I criticized those who endorse human rights abuses for Others but then "parade around as some sort of human rights crusader when it comes time to protest the treatment of one of your own, however you might define that."  I didn't mean to imply that religion was the only factor at play here.  It clearly isn't.  But in this particular case, it's a significant one.

UPDATE II:  For more on the specific motives governing the behavior in this case, and, more generally, the role which self-absorbed tribalism plays in these debates, see Digby's excellent analysis from today.