"The Ghost Writer": Polanski strikes back

If audiences can get past the scandal surrounding it, the director's latest is a canny, claustrophobic thriller 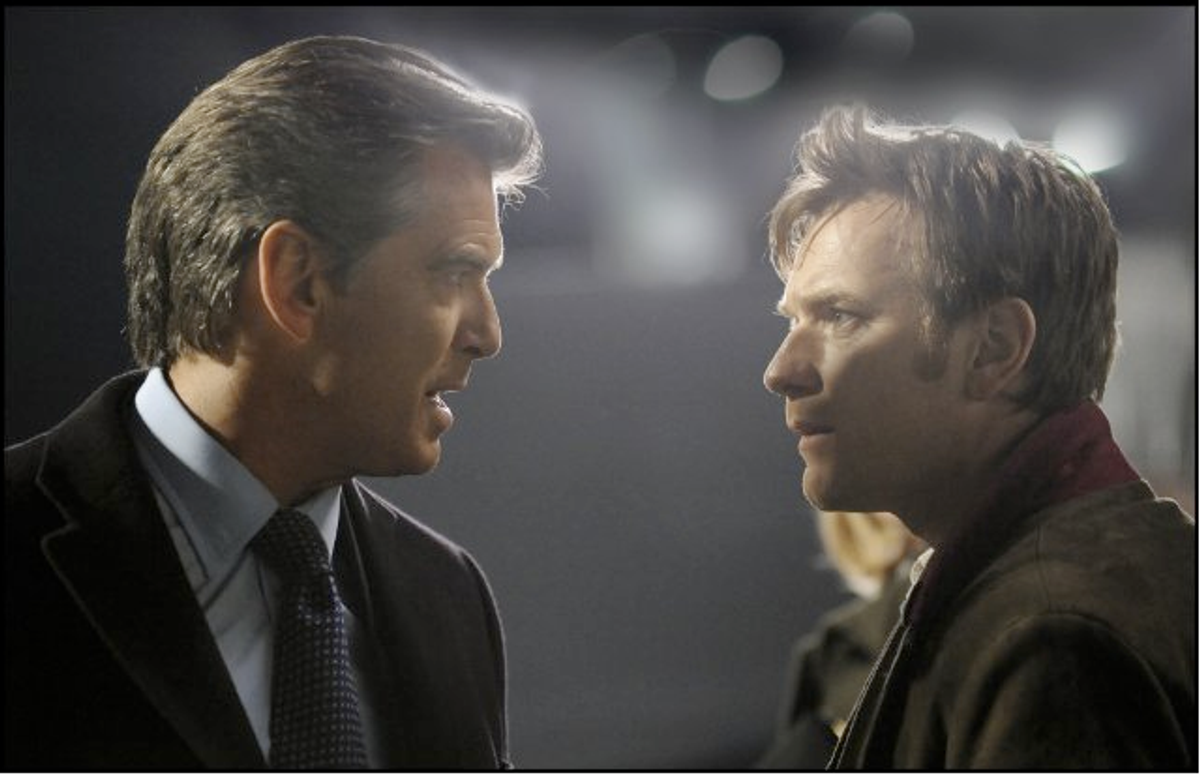 If there really were no such thing as bad publicity, I suppose we'd see curious crowds lining up around the block for the premiere of "The Ghost Writer." Instead, Roman Polanski's canny and claustrophobic new thriller, which stars Pierce Brosnan as a semi-disgraced former British prime minister and Ewan McGregor as the naive writer hired to ghost his autobiography -- offers a strange combination of marketing disaster and crisis-management test case. The film's American distributor is releasing it cautiously, on a small scale, and Brosnan and McGregor were unleashed on the press this week, in an apparent effort to refocus attention on Polanski's work and career rather than his past misdeeds and current legal predicament.

I spent 15 uninformative minutes in Brosnan's New York hotel suite last Tuesday, listening to the former James Bond recount genial anecdotes about Polanski's demanding on-set behavior and his own performance as a character who strongly resembles Tony Blair. Unsurprisingly, Brosnan declined to discuss Polanski's 1977 sex-crime conviction or his current status in legal limbo -- at this writing Polanski remains under house arrest in Switzerland, where the authorities must decide whether to extradite him to Los Angeles for sentencing -- but the twofold message was clear enough. Those who worked with Polanski on "The Ghost Writer" are rallying around him to make two halfway contradictory points: One is that filmmaking is a collaborative form, not a question of sole proprietorship like a novel or a painting, and the other is that an artist's private life and his work are different things. (I'll post a full transcript of my conversation with Brosnan soon.)

Those propositions are true enough, as far as they go. But neither is totally unambiguous, and neither is enough to prevent you and me and Uncle Harry's barber from feeling that "The Ghost Writer" has been contaminated by its context, or from scouring the film for psychological clues to its director's presumed pathologies. Not that those are not present. Like most of Polanski's recent work, this is both a genre film and a literary adaptation, but it's infused with his distinctively bleak vision of social and sexual relationships. Furthermore, I can't resist noting that "The Ghost Writer" is partly about a man forced into foreign exile by his legal problems, a man who just happens to be a famous and charismatic international playboy with a buried secret in his 1970s past.

Now, it's not as if Polanski dreamed up this yarn himself -- he shares screenwriting credit with novelist Robert Harris, but the film is based on the latter's bestseller, "The Ghost" -- and a revelation from deep in the past might be the most basic element of thriller construction. Still, this movie clearly grabbed Polanski's attention in a way most of his late-career projects (excepting his 2002 Oscar winner, "The Pianist") simply haven't. The result is a tight, taut, witty and highly theatrical entertainment, shot in shades of wintry gray, that will keep you guessing right through its final fadeout. I suppose it bears a distant tonal and structural relationship to "Chinatown," Polanski's greatest and perhaps darkest film, but those comparisons are overstated. "The Ghost Writer" is more specifically meant to evoke a combination of Billy Wilder's "Sunset Boulevard" and a Cold War-era John le Carré political spellbinder.

In both the novel and the film, McGregor's ghostwriter is an intentionally inscrutable figure, a man with no name, no family and no past who is enlisted to craft former Prime Minister Adam Lang's memoirs precisely because he knows nothing about politics. Lang, played by Brosnan with his trademark air of lordly, raffish distraction, is hidden away at his American publisher's Massachusetts beach house, ostensibly to get the book finished but also because the International Criminal Court is about to indict him for war crimes. Lang's government allegedly allowed the CIA to abduct British terrorism suspects and "render" them to third-party nations where they were tortured; conveniently, the U.S. doesn't recognize the world court's authority and won't extradite him.

If that all sounds highly plausible, that's because Harris' novel is clearly meant as a scathing indictment of Blair, Britain's real-life former P.M., who was twice elected with massive majorities but now is widely seen at home as a shameless lackey for George W. Bush's foreign policy. Polanski isn't much interested in the story's political ramifications, and the extent to which Lang's legal dilemma mirrors his own is nothing more than bizarre coincidence. (Shooting on "The Ghost Writer" had completed before Polanski was arrested in Zurich last September.)

Instead, Polanski crafts something like a devious four-hand chamber play, set largely inside the forbidding, modernist beach house -- the movie was mainly shot on a Berlin soundstage, using green screens for exterior backdrops -- and featuring McGregor as the dewy-eyed outsider who wanders unawares into a nest of vipers. Besides the vague but affable Lang, the denizens include his long-suffering wife, Ruth (Olivia Williams), who becomes the ghostwriter's confidante while nursing her own secrets, and Lang's coolly efficient assistant (Kim Cattrall), who may also be his lover.

Harris' original title points to a fifth, unseen member of the household: Lang's original ghostwriter and longtime chief of staff, who recently drowned under mysterious circumstances. McGregor almost literally steps into the dead man's shoes, moving into his room and inheriting his belongings, including the hidden files that suggest the departed biographer had begun to fill in the mysterious blanks in Adam and Ruth Lang's early political history. If Tony Blair may well be angered by Brosnan's portrayal of a vain, arrogant and painfully small-minded politician who has been imprisoned by his own empty rhetoric, Cherie Blair has reason to be flattered: Olivia Williams' Ruth is by turns beautiful, damaged, angry and brilliant -- and a step or two in front of everyone else in the film.

McGregor's ghostwriter makes several forays outside the isolated and paranoid Lang household -- Germany's North Sea coast doubles for Martha's Vineyard and Cape Cod -- none of them more sinister than his visit with a laconic Harvard professor (the estimable Tom Wilkinson) who says he barely knows Adam Lang, yet turns up in several photographs from Lang's student years at Cambridge. McGregor only finds this guy through one of the more ingenious uses of new technology in recent thrillers -- he follows the pre-programmed GPS instructions in a BMW his deceased predecessor was driving.

There are a few nice character bits around the edges to season the stew, notably James Belushi as an abrasive New York publisher, Robert Pugh as a former minister of Lang's turned international stool pigeon, and a cameo appearance by 93-year-old Eli Wallach. But "The Ghost Writer" is primarily a showcase for Polanski's superbly controlled and economical craftsmanship -- if only he had directed "Shutter Island" instead of Scorsese! -- and for his vision of a world in which the innocent are punished while the guilty walk away.

If this movie had been released a year ago, it would likely have been received as Polanski's best work since "The Pianist," and his best shot at an international commercial success since at least "Frantic" in 1988. Nothing about Polanski's life and work, including his illegal and indefensible behavior in the past, has factually changed, but now his film is likely to be noticed mainly as the footnote to a scandal. Whether to view that as irony or tragedy or simple justice is up to you. I'm going with all three, all mixed up together.