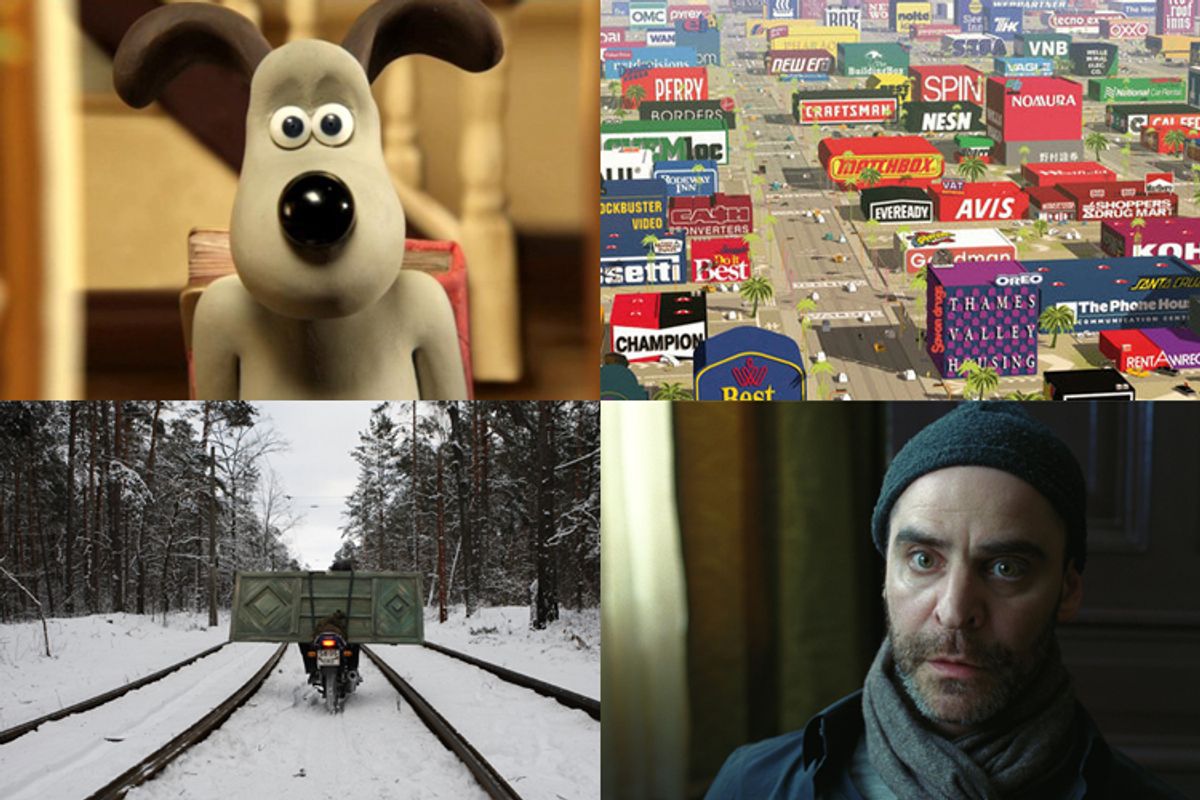 Clockwise from lower left: "The Door," "A Matter of Loaf and Death," "Logorama" and "The New Tenants"
--

Among the unpredictable delights of Oscar season in recent years has been Magnolia Pictures' theatrical release of the Academy-nominated short films, always a grab bag that ranges from explosions of unfettered imagination to calculated Hollywood calling cards. Where else can you see, on the same evening, a self-mocking neo-noir starring Nick Park's claymation characters Wallace & Gromit, a live-action tale about an Indian boy who longs to escape indentured servitude, a poetic meditation on the aftermath of the Chernobyl accident and a Tarantino-esque outburst of apocalyptic violence featuring Ronald McDonald as a profane, immoral thug?

Although I lack any scientific or statistical evidence for this claim, I suspect that the increasing popularity of the Oscar-shorts package has a lot to do with the Internet. For much of film history, shorts have been consigned to schoolrooms, public libraries and the nerdier corners of film festivals. Then, rather suddenly, with the widespread dissemination of broadband Web access, they found the perfect venue: a medium that cultivated a short attention span and rewarded brevity and punch.

Under the Academy's definitions, any film with a running time under 40 minutes is a short. Hardly anyone comes anywhere near that limit. This year, only one of the 10 nominees -- five apiece in the live-action and animated categories -- reaches 30 minutes (and that one only just), with the other nine ranging from 6 to 22 minutes in length. Does that reflect the fact that the future home of all these films is almost certainly on the Web? Or is it just because 40 minutes is an unwieldy length for both filmmakers and viewers -- long enough to require concentrated attention but not long enough to be a feature?

There's no way that a group of 10 films that somehow wove their way through the Academy's arcane selection process can represent the global explosion of shorter filmmaking, but the themes that emerge are still fascinating. While the Academy's feature-film awards are overwhelmingly focused on mainstream American movies, these categories are, as has become customary, virtually Yank-free. All five of this year's animated films are European in origin, although they're highly diverse in technique, style and theme. Only one film in either category was made by an American -- and that film was shot in India. Another live-action film was shot in the United States with an American cast, but its director and screenwriter are Danish.

I feel strongly that there are two standouts in each category and a bunch of also-rans, but experience has taught me that there's little point trying to mind-read Academy voters, most of whom pay no attention to short films during the other 11 1/2 months of the year. They'll probably vote for the most heartwarming and/or didactic films in both categories, and the world will scratch its collective head and move on. So here are my personal picks; and after you've gotten a chance to see the films, please chime in.

The Best: "A Matter of Loaf and Death" (directed by Nick Park; United Kingdom) As longtime fans of Park's exquisite "Wallace & Gromit" claymation series can attest, it began as gentle, veddy-English absurdity aimed at charming an all-ages audience and has gradually, over the years, begun to tackle somewhat darker material. I'm not comparing "A Matter of Loaf and Death" to "Double Indemnity" or anything, but this beautifully rendered noir parody features a serial-killer mystery, a femme fatale with body-image issues and multiple references to our post-9/11, heightened-security lifestyle, along with the usual Rube Goldberg contraptions, Wallace's tendency to betray his loyal Gromit in the most idiotic ways, and perhaps the most elaborate flatulence gag in the history of popular culture. It's way too scary for my 6-year-old twins, but older kids and their parents will eat up this fable of artisanal baking and skullduggery, with its politically incorrect but genre-appropriate message: You can't trust a dame. Especially not a dame in a balloon.

The Weirdest: "Logorama" (François Alaux, Hervé de Crécy, Ludovic Housplain; France) Leading with sheer brazen obnoxiousness -- and in fact never varying from that message -- "Logorama" depicts an ultraviolent, primary-colored, digital-animation Los Angeles where buildings, vehicles and people have all been replaced by corporate logos. The three directors collectively comprise the Parisian design firm H5, and I guess they've poured all their ambivalence -- not to say seething hatred -- about corporate culture into this knockoff Tarantino vision in which a gangsta Ronald McDonald takes hostages at a fast-food outlet, logo-emblazoned animals escape from the L.A. Zoo and an earthquake delivers the California lifestyle its final comeuppance. Pretty much a one-note gag, but at least it's a giddy and hilarious one.

The Rest: Spanish animator Javier Recio Gracia's "The Lady and the Reaper" is another one of those wacky European slapstick films about death. I'm not entirely sure why this one is a total drag, but I really liked the British version, "This Way Up," nominated last year. Fabrice O. Joubert's CGI-animated "French Roast" follows the misadventures of a businessman who's lost his wallet and can't pay the Frankensteinian cafe waiter for his stack of espressos. "Granny O'Grimm's Sleeping Beauty," from Irish director Nicky Phelan, features some lovely animation, but its story-within-a-story retelling of a fairy tale falls curiously flat.

The Best: "The Door" (Juanita Wilson; Ireland) As improbable as the combination seems -- a young Irish director making a film in Ukrainian about the effects of the Chernobyl disaster -- "The Door" is a subtle, accomplished and impressive work of cinema, far outstripping everything else in the category. Adapted from the first-person account of a Chernobyl survivor, Wilson's script is a simple chronicle of a family tragedy. What she builds from that is a tense, evocative 17-minute mood piece, beautifully shot by Tim Fleming, with memorable performances from Igor Sigov and Juliette Gering as the young parents suddenly evacuated from the poisoned town with no explanation of why or what lies ahead. Wilson is now making a feature based on Croatian journalist Slavenka Drakulic's Balkan War account "As If I Am Not There."

The Weirdest: "The New Tenants" (Joachim Back; Denmark/U.S.) As if trying to drive you away before it even gets going, "The New Tenants" begins with an openly hostile monologue delivered by David Rakoff (who co-stars and collaborated on the screenplay) about the pointlessness of human life and the ubiquity of death. These sentiments are underlined in the wacky-dark comedy that follows; it appears that Rakoff and his boyfriend (Kevin Corrigan) have just moved into a Manhattan apartment where a multiple homicide has occurred and a kilo of heroin may be stashed. Their domestic tranquility is disturbed first by an elderly neighbor looking for a cup of flour (Helen Hanft), but then by a jilted husband (Vincent D'Onofrio), a psychotic drug dealer (Jamie Harrold) and a somnolent murderess (Liane Balaban). Danish director Back's excursion into neo-Lynchian comic darkness offers a lot of New York talent working off the clock, but it's too relentlessly unfriendly for Oscar.

The Rest: An outcast kid wakes up from a nap to find himself alone in school in Aussie director Luke Doolan's mini-thriller "Miracle Fish," which feels more like a Hollywood tryout than anything else in this category. Gregg Helvey's "Kavi" spins a winning fable about an Indian boy who dreams of life beyond the brick-making kiln where he works alongside his parents from dawn to dusk. "Instead of Abracadabra," from Swedish writer-director Patrik Eklund, boasts a standout performance by Simon J. Berger as an inept stage magician in his 20s who still lives at home, along with a pleasant quirky-indie romance.

"The Oscar Nominated Short Films 2010" program is now playing at theaters in most major cities, with wider release to follow.