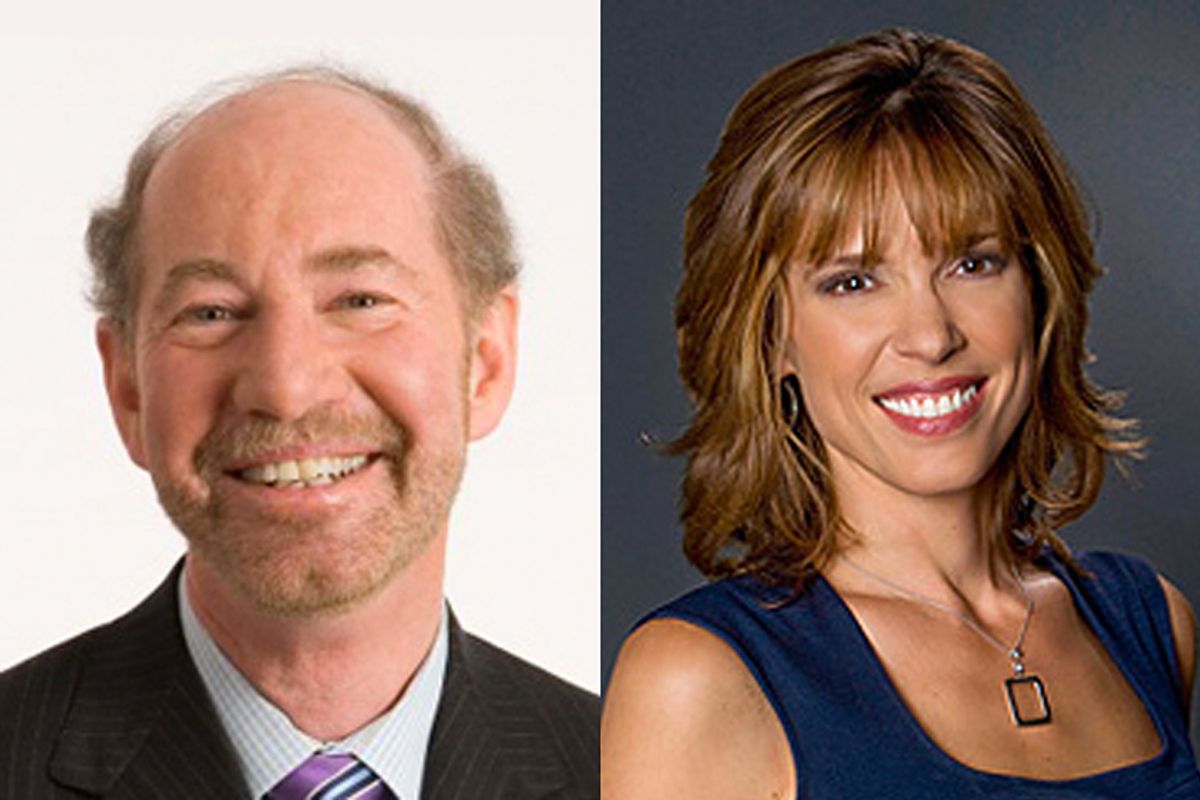 Oh, ESPN, you really are the knuckle-draggingest, forehead-slappingest, still working on getting opposable thumbiest network out there.

Was it only last month you ditched Paul Shirley after his kooky open letter to the people of Haiti in which he requested, among other gems, "Could you not resort to the creation of flimsy shanty- and shack-towns? And could some of you maybe use a condom once in a while?" Wasn't it just last fall you canned Steve Phillips after a fling with an assistant turned into a tawdry debacle of vengeance and TMI?

Perhaps it's little wonder, then, that when word got out yesterday you'd suspended "Pardon the Interruption" host Tony Kornheiser for two weeks after a few choice remarks about SportsCenter anchor Hannah Storm, our reaction was, "A stupidity outbreak at ESPN? Shut UP!"

Speaking on his Washington, D.C., radio show on Friday, Kornheiser found himself channeling his inner fug girl, minus the humor, with a tirade on Storm's "horrifying" wardrobe. "She's got on red go-go boots and a Catholic-school plaid skirt ... way too short for somebody in her forties or maybe early fifties by now.... She looks like she's got sausage casing wrapped around her upper body. I know she's very good and I'm not supposed to be critical of ESPN people. But Hannah Storm? Come on now. Stop. What are you doing? ...  She's what I would call a Holden Caulfield fantasy at this point."

What? No cracks about her weight?

Though Kornheiser was quick to issue a mea culpa, stating on his show yesterday that he'd apologized directly to Storm, and that "I have no right to insult what anybody looks like or what anybody wears. That, I think, should go without saying," his original sentiments did not go unechoed. Others were quick to chime in with their own critiques of Storm's sartorial choices – and age.  Though sports blog TheBigLead generously allowed that "Nobody expects Storm to be covered in a burka," they followed up with the assertion that "Storm frequently wears outfits that you might see on a cougar at a bar." They then suggested "[ESPN Executive VP] Norby [Williamson] should go home and ask his neighbor’s wife what she thinks of Storm’s short skirts, tall boots, and plunging necklines. He might be surprised."

Meanwhile, David Hyde at the SunSentinel similarly groused, "What is ESPN doing in suspending him for calling out Hannah Storm on her constant wardrobe malfunction? Are they nuts? Anyone who has watched her ESPN SportsCenter gigs has thought something close to what he's said, if not used the term 'sausage casing.' Remember, she's 47." Shucks, as if we could forget with so many gentlemen helpfully bringing it up.

As Deadspin pointed out recently, ESPN has itself been none too thrilled with some of Storm's more outré fashion choices, allegedly suggesting she tone it the hell down. And Storm's colleague Erin Andrews has taken similar flak for her "sexpot" getups.  All of which raises tricky questions. Television anchors of either gender generally are expected to conform to a certain uniform look – you don't see John Anderson strutting around in Ed Hardy.

So is it possible Kornheiser's comments were justified? It's fair to say that Storm does indeed march to her own drummer.  And snarking on other people's ill-advised clothing choices is a custom as venerable as clothing itself. (You're wearing those feathers to the ritual sacrifice? Srsly? Well, good luck appeasing Tlaloc now.)

But snarking on a peer, in public, and making digs at her age, especially when you work for an institution with a less than stellar track record in its treatment of women? That's beyond the network's usual brand of dumb. Hannah Storm's outfits may indeed stray occasionally to the avant-garde,  but it's Kornheiser -- and ESPN -- that's looking ugly.