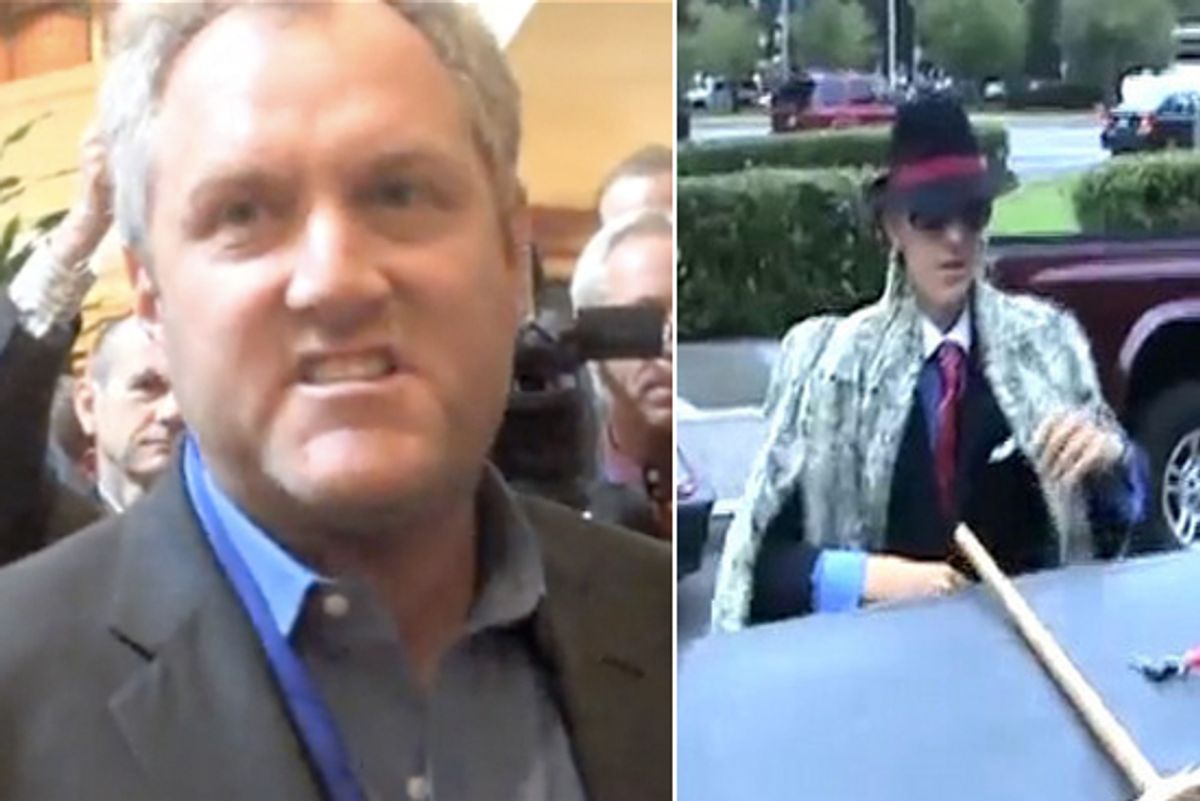 A couple of weeks ago, I spent a lovely Saturday afternoon getting shrieked at by Andrew Breitbart when I dared ask him a few skeptical questions about his self-proclaimed exposé of ACORN. It doesn't matter how the "investigation" was conducted, Breitbart insisted -- what matters is that ACORN aided and abetted a child prostitution ring. (Which it didn't.)

These days, Breitbart may not be enjoying himself quite so much.

Yesterday, the Brooklyn district attorney announced the local ACORN office there hadn't engaged in any criminal conduct -- despite the hyperventilating by Breitbart and on Fox News. And in fact, a law enforcement source told the New York Daily News, the hidden-camera tapes James O'Keefe and Hannah Giles made of themselves posing as a prostitute and her boyfriend were "edited to meet their agenda."

Now, it turns out, Breitbart hadn't even seen the full tapes when he put O'Keefe's handiwork up on his site. Or at least, that's what he seems to have told blogger Mike Stark at CPAC, the same conservative conference where he yelled at me (and Max Blumenthal, and the Washington Independent's Dave Weigel, and Tommy Christopher, and just about anyone else who tried to get him to answer questions about O'Keefe's videos). Stark pressed him on why Breitbart, and everyone reporting breathlessly about O'Keefe's "scoop," originally declared O'Keefe had gone into ACORN offices dressed as a pimp, when in fact he'd been dressed more like a junior Capitol Hill staffer. Breitbart said he didn't initially realize the discrepancy:

I said, what I would require, in order to help them launch your independent film production, is on the big government site that we're going to launch, I want full transcripts and the full audio ... Why it matters what a pimp is wearing, whether they're dressed, you know, in a tutu or dressed in a flamboyant outfit, when you go in and you try and act like a pimp, you're a pimp, okay? So it never dawned on me, who saw the edited videos and who read the transcripts, and who heard the audio, and that's which I'd required -- it never dawned on me that it would ma -- not that it would matter, I didn't know, because James has a video that's looking out like that.

Why did the video begin with O'Keefe, dressed like an extra from a bad Bootsy Collins documentary, trailing Giles around and doing the best pimp-walk impression a conservative Rutgers grad could muster? "Because it's the title sequence," Breitbart said, comparing the videos to "Borat" or Ali G. "It's the title sequence with music."

Of course, that didn't stop Fox News from interviewing O'Keefe, dressed as a pimp, on its morning show when the tapes first appeared. Or the New York Times, for that matter, from declaring that O'Keefe was "dressed so outlandishly that he might have been playing in a risqué high school play." None of which turned out to be true.

The ACORN videos, now that people have had a chance to look into their claims, are starting to fall apart. (Which may be why Breitbart still won't release the full, unedited videos.) The notion that they proved ACORN was funding child sex slavery rings was always fiction, since the only sex slavery existed in O'Keefe's and Giles's feverish imagination. But the more scrutiny the videos get, the less they seem to show. Comparing them to Sasha Baron-Cohen's work, of course, doesn't do them any favors, since no one has ever pretended "Borat" was a crusading work of journalism. The damage, though, has been done; ACORN basically shut down as a national organization, and Congress moved to deny it all federal aid within days of Breitbart's big "scoop."

Breitbart, of course, is a bigger star than ever. He got a featured speaking slot at CPAC, and he'll address a big GOP confab in New Orleans next month, where he'll share the stage with Sean Hannity, Sarah Palin and others who make conservative hearts beat faster. He may not have reinvented media, the way his blustery promises say he will, but he's certainly made himself into a big deal. At CPAC, he was surrounded by a ring of adoring fans, who cheered him on as he hollered.

Meanwhile, if he was telling Stark the truth, he didn't even follow his own advice to look into the scandal carefully. Now he's cutting O'Keefe loose, insisting over and over again that he was just an "independent film producer" (though O'Keefe's arrest in New Orleans for trying to pull another hidden-camera stunt involving Sen. Mary Landrieu's phone system may have something to do with that, as well). There's no real reason to think it would matter to Breitbart if the ACORN tapes keep falling apart under scrutiny, though. He's never bothered to keep his boasting about the tapes too closely tied to the truth. And in the end, it probably doesn't matter. After all, Breitbart doesn't really want the media to change its ways; if he did that, he wouldn't have anyone to accuse of being un-American, as he taunted the press at CPAC. As long as they keep paying attention to him, he'll be just fine.