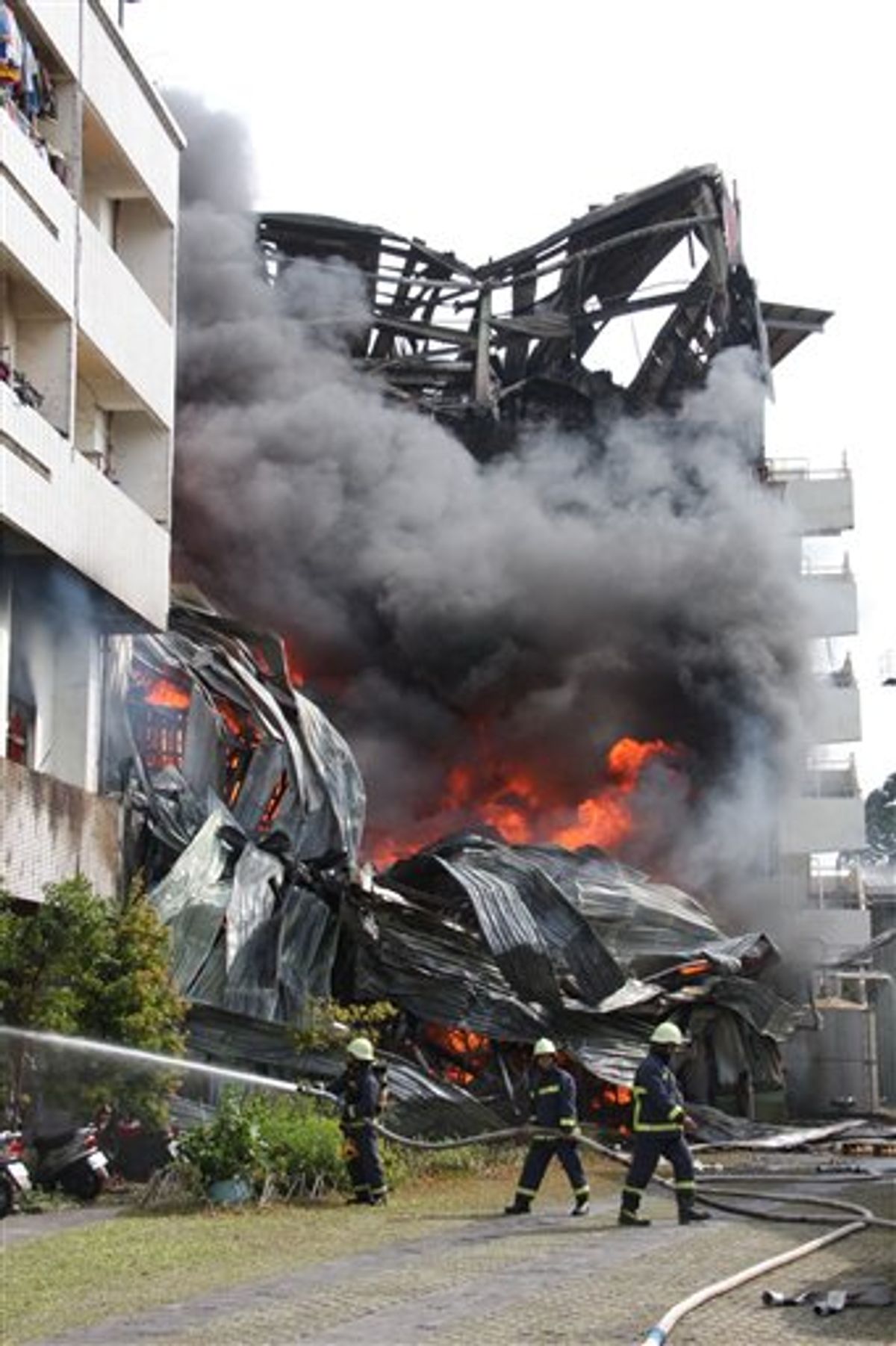 Firemen battle a blaze at a textile factory that started shortly after a strong earthquake jolted the island, Thursday, March 4, 2010, in the southern area of Tainan, Taiwan. A powerful 6.4-magnitude earthquake rocked southern Taiwan on Thursday morning, causing widespread damage, and disrupting communications around the island. (AP Photo) ** TAIWAN OUT ** (AP)
--

No tsunami alert was issued. The quake was centered in the same mountainous region of rural Kaohsiung county that endured the brunt of the damage from Typhoon Morakot, a devastating storm that killed about 700 people last August.

Taiwanese actor Chu Chung-heng said he and other passengers were close to panic when the high-speed train on which they were traveling was dislodged from its track by the quake.

"Many people in my car were screaming," he said. "I was so scared that I couldn't make a sound. The train shook very hard, and I thought it was going to overturn."

Rail service in southern and central Taiwan was suspended, as was the state-of-the-art subway system in Kaohsiung city, Taiwan's second largest with a population of 1.5 million. Kaohsiung is about 250 miles (400 kilometers) south of Taipei.

In nearby Tainan, a fire broke out in a textile factory shortly after the quake hit, sending huge plumes of black smoke billowing into the air. Power outages struck Taipei and at least one county to the south, and telephone service in many parts of Taiwan was spotty.

Kuo Kai-wen, director of the Central Weather Bureau's Seismology Center, said the quake was not geologically related to the massive temblor that hit Chile last Saturday, but its intensity was unusual for the area.

"This is the biggest quake to hit this region in more than a century," he said.

The quake's epicenter was near the town of Jiashian, especially hard hit by last year's typhoon. A Kaohsiung county official told CTI TV news that some temporary housing built for typhoon survivors collapsed.

The Ministry of Defense said troops were dispatched to Jiashian to report on the extent of the damage.

In nearby Liugui an unidentified high school student described the quake as terrifying. "Everyone was running out of the classroom, and some people fell in the rush," she told ETTV.

The fire agency said 64 people had been injured.

A spokesman for President Ma Ying-jeou said authorities had been instructed to follow the quake situation closely and take steps to mitigate damage and dislocation. Ma was widely criticized for his government's slow response to last year's typhoon.

The presidential office said he planned to visit Tainan on Thursday afternoon.

Earthquakes frequently rattle Taiwan but most are minor and cause little or no damage.

However, a 7.6-magnitude temblor in central Taiwan in 1999 killed more than 2,300 people. In 2006 a 6.7-magnitude quake south of Kaohsiung severed undersea cables and disrupted telephone and Internet service for millions throughout Asia.