Who are the actual "crazy" people in American politics?

My Salon colleague, Mark Benjamin, writes about last night's Larry King Show -- featuring a debate between Democratic Rep. Alan Grayson and GOP Rep. Michelle Bachmann -- and does so by repeatedly branding Grayson as being every bit as "crazy" as Bachmann.  Beginning with the article's headline ("Bachmann and Grayson: A diary of crazy") to his sarcastic description of "these two towering intellects" to his claim that Grayson and Bachmann are "the Candy Stripers of Crazy of their parties," Benjamin denigrates Grayson's intellect and mental health by depicting him -- with virtually no cited basis -- as the Democratic mirror image of Bachmann's rabid, out-of-touch extremism.  This view of Grayson has become a virtual Washington platitude, solidified by The New York Times' David Herszenhorn's dismissal of Grayson as "the latest incarnation of what in the American political idiom is known as a wing nut."

There are so many things wrong with this analysis.  To begin with, it's a classic case of false journalistic objectivity:  the compulsion of journalists to posit equivalencies between the "two sides" regardless of whether they are actually equal (since I'm calling a GOP member of Congress "crazy," I now have to find a Democrat to so label).  Benjamin cites numerous Bachmann statements that demonstrate her penchant for bizarre claims (and there are many he omitted), but points to only one Grayson statement:   his famous floor speech in which he claimed: "If you get sick in America, the Republican health care plan is this:  Die quickly."  One could reasonably object to that statement as unduly inflammatory rhetoric, but Grayson was one of the only members of Congress willing to forcefully connect health care policy to the actual lives (and deaths) of American citizens.  There's nothing crazy about dramatically emphasizing that causal connection; far crazier is to ignore it. 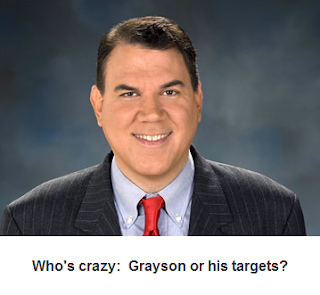 But more important, Grayson has managed to have more positive impact on more substantive matters than any House freshman in a long time (indeed, he makes more of a positive impact than the vast majority of members of Congress generally).  He has tapped into his background as successful litigator and his Harvard degrees in law and public policy to shape public discussion on a wide range of issues --  from his highly effective grilling of the Fed Vice Chair regarding massive, secretive Fed activities and aggressive investigation of the fraud surrounding the Wall Street bailout to his unparalleled work exposing defense contractor corruption, his efforts to warn of the unconstitutional underpinnings of anti-ACORN legislation (a federal court proved him right), his creative (if not wise) legislative proposals to limit corporate influence in politics, and his successful, bipartisan crusade to bring more transparency to the Fed.  What conceivable basis exists for disparaging as "crazy" one of the few members of Congress who is both willing and able to bring attention to some of the most severe corruption and worst excesses of our political establishment?

The most significant point highlighted by this attack on Grayson as "crazy" is that, in our political discourse, the two party establishments typically define what is "sane," and anyone outside of those parameters is, by definition, "crazy."  "Crazy" is the way that political orthodoxies are enforced and the leadership of the two political parties preserved as the only viable choices for Sane People to embrace.  Anyone who tiptoes outside of those establishment parameters -- from Ron Paul on the right to Dennis Kucinich on the left, to say nothing of Further Left advocates -- is, more or less by definition, branded as "crazy" by all Serious, mainstream people.

The converse is even more perverse:  the Washington establishment -- which has endorsed countless insane policies, wrought so much destruction on every level, and has provoked the intense hatred of the American citizenry across the ideological spectrum -- is the exclusive determinant for what is "sane."  As long as one remains snugly within its confines, one will be shielded from the "crazy" appellation regardless of how many genuinely crazy views one embraces.  Positing proximity to the Washington Establishment -- of all things -- as the Hallmark of Political Sanity is about as irrational as it gets, yet that continues to be the barometer of Political Normalcy.

Just consider who is supported and embraced by those who slap the "crazy" label on the forehead of every perceived dissident.  Hillary Clinton -- the ultimate embodiment of Democratic Party Seriousness and Sanity -- supported the invasion of Iraq by warning of scary weapons and Al Qaeda ties that did not exist ("Saddam Hussein has worked to rebuild his chemical and biological weapons stock, his missile delivery capability, and his nuclear program. He has also given aid, comfort, and sanctuary to terrorists, including Al Qaeda members"), and she spent her campaign beating her chest and doing things like threatening to "totally obliterate" Iran.  While in office, Barack Obama has endorsed putting people in cages with no charges, assassinating American citizens with no due process, eavesdropping on Americans en masse with little oversight, increasing military spending beyond its shockingly inflated levels while searching for ways to cut Medicaid and Social Security, and blocking judicial review of presidential felonies and war crimes on the ground that those criminal acts constitute vital "state secrets" and must be protected.  Most Serious, Sane Democrats have supported all of that insanity.

Meanwhile, the GOP establishment from top to bottom spent a decade cheering on torture, disappearances, abductions, unprovoked wars, chronic presidential lawbreaking and truly sick McCarthyite witch hunts.  Both of the Sane Parties conspired to transfer, with little accountability, massive amounts of public wealth to the very Wall Street firms which virtually destroyed the entire world economy, while standing by and doing very little about tragic levels of joblessness or the future risk of Wall-Street-caused financial crises; kept us waging war for a full decade in multiple countries (while threatening others) even as we near the precipice of bankruptcy, the hallmarks of under-developed nation status and the disappearance of the social safety net; and are so captive to the corporate interests which own the Government that they viciously compete with one another over who can be a more loyal servant to those interests.

While all of that is happening, those whom all Serious, Sane people agree are Crazy -- people like Dennis Kucinich and Ron Paul and Alan Grayson -- vehemently oppose most if not all of that and try to find ways to expand the realm of legitimate debate and political alliances beyond the suffocating stranglehold of those responsible.  So who exactly is Crazy?  That Grayson sometimes treats our political discourse as the ludicrous freak show that it is, rather than pretending that it is substantive, sober and Serious, is evidence of his sanity -- not the opposite.

Are there positions held by people like Kucinich, Paul and Grayson that are fairly characterized as radical and wrong?  Certainly:  that's true for everyone, most of all the mavens of the Washington Establishment whose followers claim a monopoly on Sanity and demonize as Crazy all who deviate.  But between establishment crazies and those who have been marginalized by them as Crazy, the former have wrought far more damage than the latter.  It's not even a close call.  There are many legitimate ways to measure Craziness; the extent to which one deviates from the orthodoxies of the political establishment is most assuredly not one of them.  If anything, given the character and record of the American political establishment, such deviation is a necessary (though not sufficient) condition for actual sanity.

UPDATE:  Here is a classic example of this dynamic:  back in mid-January, a mere six weeks ago, Grayson went on Hardball and advocated that the Democrats pass health care reform through reconciliation, which would enable them to avoid a GOP filibuster.  But back then, all Serious People (i.e., dutiful Party Loyalists) insisted that the mere suggestion was crazy (because neither party's leadership had yet deemed it acceptable), and Matthews thus angrily berated Grayson as crazy, unrealistic, an  "outsider" and "pandering to the netroots" for suggesting such a thing (Beltway journalists are nothing if they're not mindless amplifiers of establishment orthodoxy).  But now?  Thirty-three Democratic Senators are calling for the passage of a public-option-inclusive health care reform bill via reconciliation, and the President himself wants to use that process as well (albeit without a public option).  Now that Party Leaders have embraced reconciliation, it's been magically and instantly transformed from Crazy Fringe Loser Talk into Serious, Sane, Responsible Advocacy -- all within a matter of weeks.  That's virtually always how the "Crazy" label works:  as a means of marginalizing those who advocate ideas that the Washington Establishment rejects.