Rep. Raul Grijalva says Obama blamed the Senate for the public option's demise, but will fight for it down the road 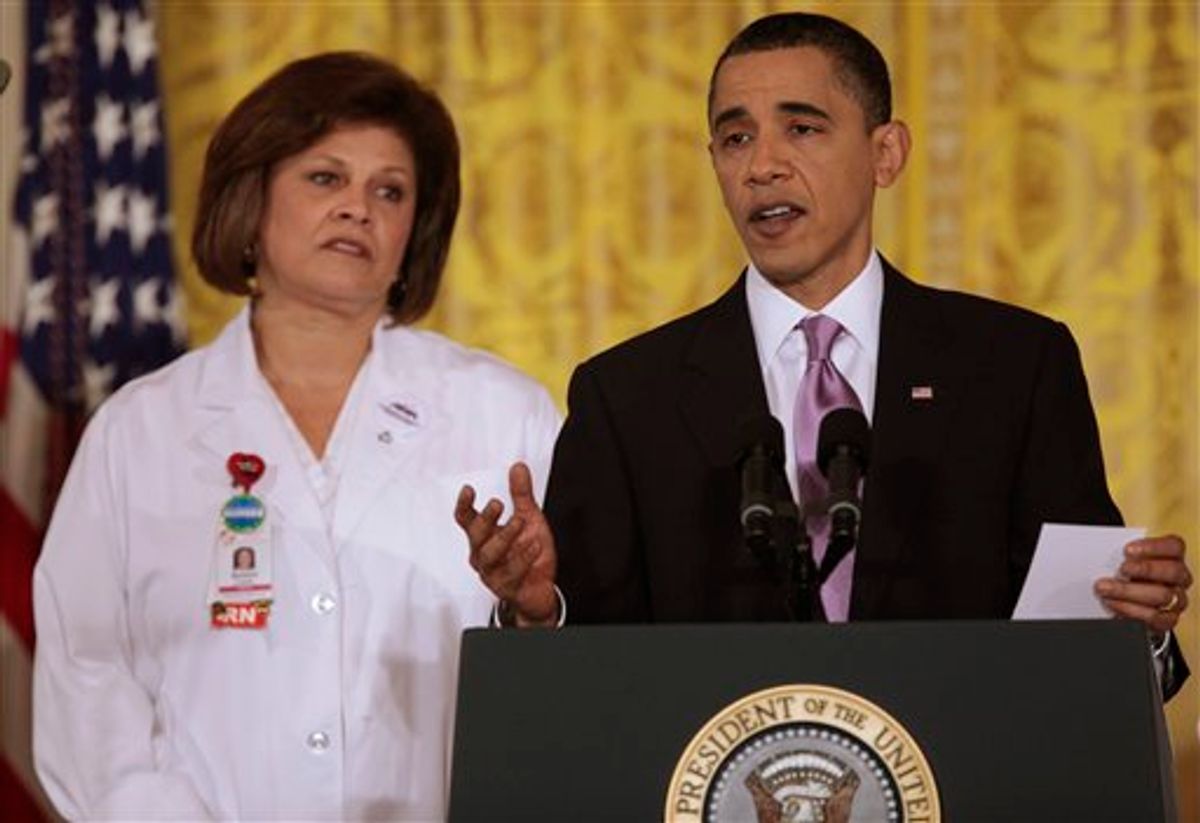 A key House progressive says President Obama blamed the Senate Thursday for the fact that a public insurance option has been dropped from healthcare reform legislation -- but promised to push for one in the future, after the current bill passes.

"The meeting with President Obama today was productive and necessary, and I was glad to hear him speak frankly about where we stand on healthcare legislation," said Rep. Raúl Grijalva, D-Ariz., the co-chairman of the Congressional Progressive Caucus, in a statement after meeting with Obama Thursday. Grijalva had told Salon Wednesday he might not vote for the healthcare bill, in part because the public option had been dropped. The meeting at the White House Thursday was aimed to keep him and other liberals on board. "He said the public option -- a well-known and long-standing progressive priority -- lacks enough Senate support to be included in the final package. However, he personally committed to pursue a public option after passage of the current bill."

Grijalva's statement was much less skeptical than he had sounded in person on Wednesday. "I remain concerned about elements of the bill, but was encouraged by the president’s outreach and interest in a substantive discussion," he said. "We agree that expanding health care access and quality, while bringing down costs, is a top priority this year, and I intend to continue playing a constructive role until Congress holds its final vote."

Senate Democratic aides tend to agree with Obama's assessment; though the public option is popular with voters, and has the support of most House and Senate Democrats, it may not actually have the 51 votes it would need to pass through the budget reconciliation process. A group of progressive organizations is trying to push Senate Democrats to support it, and has 35 lawmakers on the record backing the idea.

The promise to push for a public option later isn't likely to convince them to drop the pressure; in fact, if Obama says the Senate is the problem, that's likely to increase it.

UPDATE: Adam Green, a co-founder of one of the groups pushing the public option, just e-mailed Salon the White House is on the wrong side of the debate. "Obama is telling America, 'No, we can't,'" Green said. "But as Senate moderates like Tim Johnson, Tom Udall, Jeanne Shaheen and 32 other senators joined the call for the public option in the past two weeks, the truth became increasingly clear: 'Yes, we can.' If President Obama doesn't think the votes exist in the Senate, he needs to name which senators would oppose it. If he's too weak to stomach that, than he needs to get out of the way and let those who know how to fight lead the charge."

For House Democratic leaders, meanwhile, keeping liberals happy is a top priority as they search for the 217 votes they'll need to pass the Senate's version of the healthcare bill, and then a separate reconciliation measure to "fix" it with some changes. The meeting at the White House today was the first one liberals have had with Obama on healthcare since Oct. 27. But it might not be the last one in the next few weeks. The administration wants the House to vote on the Senate bill by March 18, before Obama leaves for a trip to Asia.