The majestic petulance of John Roberts 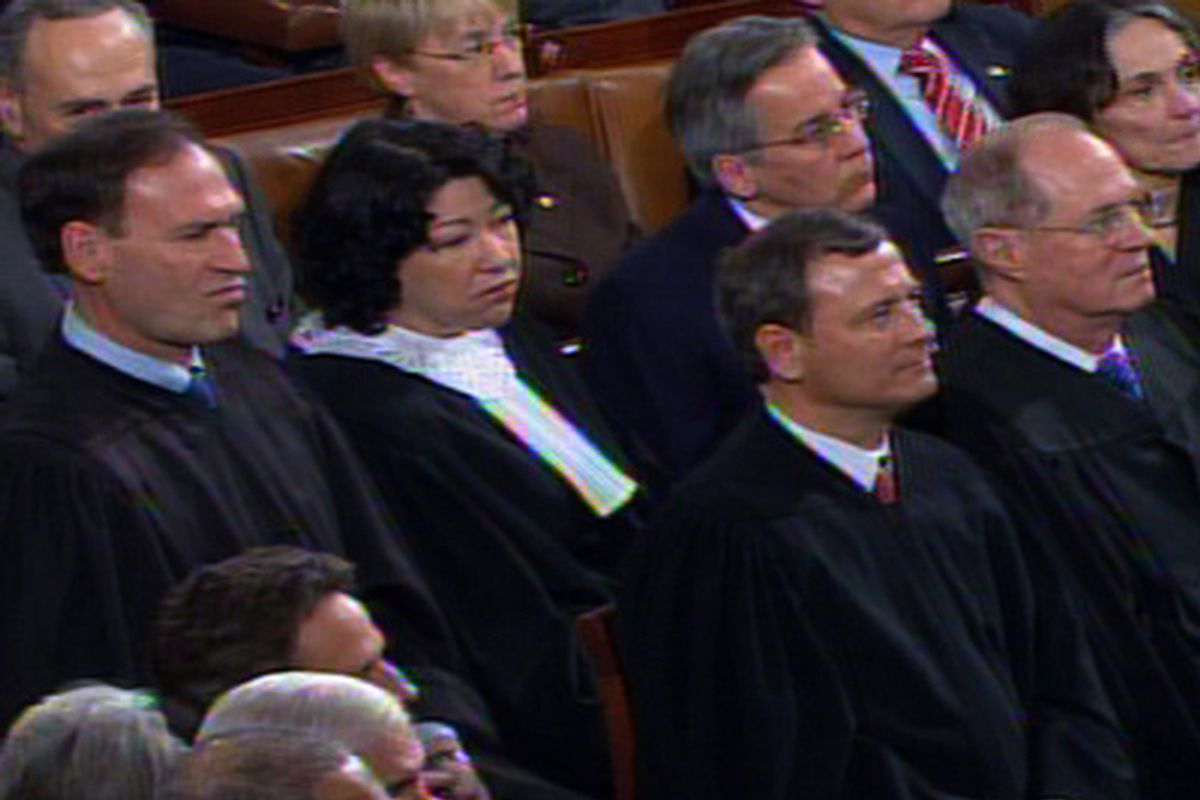 Supreme Court Justices at President Obama's State of the Union Address on Jan. 27.
--

The petulance and sense of self-importance on display here is quite something to behold:

U.S. Supreme Court Chief Justice John Roberts said Tuesday the scene at President Obama's State of the Union address was "very troubling" . . . . Obama chided the court, with the justices seated before him in their black robes, for its decision on a campaign finance case. . . . Responding to a University of Alabama law student's question, Roberts said anyone was free to criticize the court, and some have an obligation to do so because of their positions.

"So I have no problems with that," he said. "On the other hand, there is the issue of the setting, the circumstances and the decorum.

"The image of having the members of one branch of government standing up, literally surrounding the Supreme Court, cheering and hollering while the court -- according the requirements of protocol -- has to sit there expressionless, I think is very troubling."

It's not actually a unique event of oppression or suffering to have to sit and listen to a speech where someone criticizes you and you can't respond that very moment (but are able, as Roberts just proved, to respond freely afterward).  Even in the State of the Union Address, it's completely customary for the President to criticize the Congress or the opposition party right to their faces, while members of his party stand and cheer vocally, and -- as the reaction to Joe Wilson's outburst demonstrated -- "decorum" dictates that the targets of the criticism sit silently and not respond until later, once the speech is done.  That's how speeches work.  Only Supreme Court Justices would depict their being subjected to such a mundane process as an act of grave unfairness (and, of course, Roberts' comrade, Sam Alito, could not even bring himself to abide by that decorum).

What makes Roberts' petty, self-absorbed grievance all the more striking is that this is what judges do all the time.  It's the essence of the judicial branch.  Federal judges are basically absolute tyrants who rule over their courtroom and those in it with virtually no restraints.  They can and do scold, criticize, berate, mock, humiliate and threaten anyone who appears before their little fiefdoms -- parties, defendants, lawyers, witnesses, audience members -- and not merely "decorum," but the force of law (in the form of contempt citations or other penalties), compels the target to sit silently and not respond.  In fact, lawyers can be, and have been, punished just for publicly criticizing a judge.

As is true for any large group of people, the range of behavior varies greatly, from unfailingly polite judges to pathologically thuggish ones, but the core dynamic of the judicial process is that judges wield absolute power and everyone else is essentially captive to their whims.  That is why the overriding attribute of those who interact with them is one of extreme, royalty-like deference, both formally (standing when they enter, addressing them as "Your Honor," having them sit always on an elevated platform, decked in their flowing, magisterial robes) as well as informally (watch any court proceeding and see lawyers petrified of somehow offending the judge).  To say that, for many of them, this endless deference affects their expectations and sense of entitlements is to understate the case, as Roberts just proved.

Supreme Court Justices, in particular, have awesome, unrestrained power.  They are guaranteed life tenure, have no authorities who can sanction them except under the most extreme circumstances, and, with the mere sweep of a pen, can radically alter the lives of huge numbers of people or even transform our political system (as five of them, including Roberts, just did, to some degree, in Citizens United).  The very idea that it's terribly wrong, uncouth, and "very troubling" for the President to criticize one of their most significant judicial decisions in a speech while in their majestic presence -- not threaten them, or have them arrested, or incite violence against them, but disagree with their conclusions and call for Congressional remedies (as Art. II, Sec. 3 of the Constitution requires) -- approaches pathological levels of vanity and entitlement.  The particular Obama/Roberts/Alito drama is an unimportant distraction, but what this reflects about the mindset of many judges, including (perhaps especially) ones on the Supreme Court and obviously the Chief Justice of that court, is definitely worth considering.