The Fox News host reaches a new low in his rewriting of U.S. history 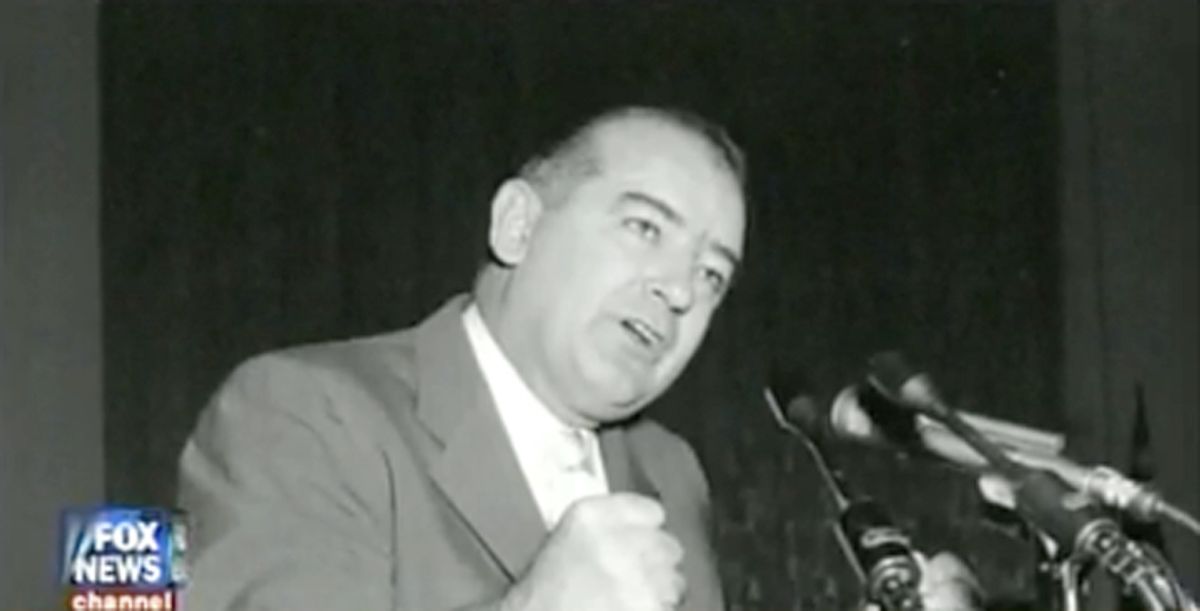 Glenn Beck's obsession with rooting out the evils of progressivism have led him to take up history lately. But it's a strange kind of history, an alternative one that bears little resemblance to what you might read in textbooks. (Since textbooks, after all, are all written by socialists.) On his show Thursday, Beck gave a special Fox News Channel gloss on Franklin D. Roosevelt -- the villain in Beck's narrative -- and on Joe McCarthy -- who magically transformed from a life-destroying demagogue to a hero.

Roosevelt, Beck explained, hired Communists all over the place for the growing federal government during the Depression and World War II. Not only that, but he wasn't as popular as people think he was. "If FDR was so beloved, and no one was spooked by how much power he took, why is it that his body was barely cold when they passed the 22nd Amendment to the Constitution to make sure no one could ever serve as long as he did?" Beck asked. That's not, strictly speaking, really true; Roosevelt died in 1945, and Congress didn't pass the 22nd Amendment until 1947. It wasn't ratified by the states until 1951.

Next came a blast of what's become standard-issue conservative blather about how the New Deal actually made the economy worse during the 1930s, not better. "His policies didn't save us," Beck explained. "In fact, it was only in America that the period known as 'the Depression' is known as the 'Great Depression'. Why? Because his policies stripped the free-market system and actually prolonged the depression." That's not just slightly false, it's really false. A British economist, Lionel Robbins, helped popularize the term with a book, "The Great Depression," published in 1934 -- when he worked at the London School of Economics. Also, only the most dogmatic anti-New Deal conservatives -- like Beck -- think Roosevelt's policies made the Depression worse. Many historians, in fact, think things worsened in the middle of the decade when FDR backed away from New Deal policies.

But the best part of Beck's little history lesson came a few minutes later, when he segued on to the 1950s. "It was Republican Sen. Joe McCarthy, who shined the spotlight on the Communist Party again," Beck said rhapsodically. "McCarthy later led a Senate committee investigation into inefficiencies in the government. Critics accused him of falsely identifying Communists, and smearing their names." Those pesky critics! Beck then brought up, for some reason, the Cold War "domino theory," that if one nation went Communist, so would its neighbors. "Kind of feels like that now, doesn't it?" he asked.

Bashing FDR is, like it or not, becoming second-nature to conservatives. But you don't often hear people willing to offer praise for McCarthy, who -- as even Beck had to admit -- was censured by the Senate in 1954 for his feverish pursuit of Reds, little of which he was able to substantiate.

What any of this had to do with current affairs was -- as it often is while watching Beck's show -- a bit of a mystery. Until later in the program. On Monday's show, he promised, he'd reveal a new Communist -- working for the Obama White House. (Can't be bothered to expose the scandal Friday, though; after all, on Fridays, Beck usually airs pre-taped shows.)

Watch the whole weird rant here, courtesy of a source who captured it as it aired: