Arlen Specter was supposed to be vulnerable in Pennsylvania's Democratic primary. But it hasn't played out that way 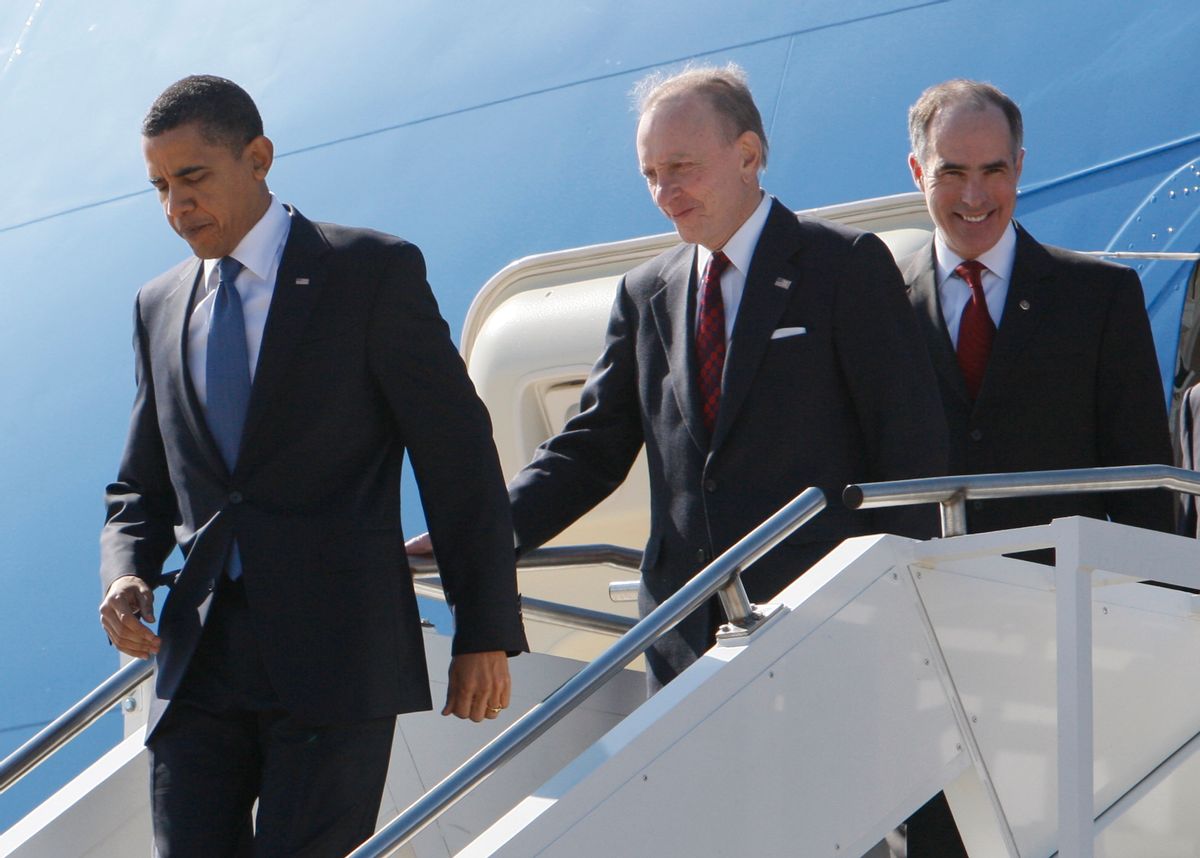 If there was any doubt about which guy the White House likes in Pennsylvania's Democratic Senate primary between Sen. Arlen Specter and Rep. Joe Sestak, President Obama put it to rest pretty quickly during a visit to the state last week.

"Your senior senator, who has just been doing outstanding work in the Senate, Arlen Specter, is in the house," Obama told a crowd at Arcadia University on Monday, running through the usual shout-outs that visiting politicians do before moving on to their main topic (in this case, healthcare reform).

Specter — who jumped from the GOP to the Democrats in April 2009, back when the whole country seemed to be doing the same en masse — got the treatment befitting the White House's favorite. He flew up to Washington with Obama on Air Force One, getting the coveted photo op walking off the plane and schmoozing with the press afterward back at Andrews Air Force Base. Sestak, on the other hand, was already practically retired in Obama's remarks. "Somebody who rendered outstanding service to our nation before he was in Congress, Joe Sestak, is in the house," the president said, honoring Sestak's career in the Navy, but conspicuously forgetting to mention how he spends his time nowadays.

That's kind of how it's gone for Sestak with the Democratic establishment, since before he got into the race last summer. Specter's deal with the White House and with the Senate leadership got them all on board to back him in the primary, no matter who else ran; the powers that be cleared most of the rest of the field. But Sestak stuck it out anyway, banking on riding progressive outrage over Specter's naked opportunism to the nomination and, eventually, the Senate.

So far, at least, it hasn't worked out that way. With just over two months to go before the May 18 primary, Sestak has barely moved in the polls against Specter. A survey out Friday showed Specter cruising along with a 20 point lead in the primary. That's more or less the same thing others have found for as long as pollsters have been phoning Pennsylvania Democrats to ask them about the race. After nearly 30 years in the Senate — and almost 45 years as an elected Republican — Specter isn't exactly the most popular guy in the state. But Sestak hasn't managed to break through yet, and many observers in Washington and in Pennsylvania think he may not be able to in the end.

"Sestak has just hasn't caught on in the way you would have thought," said G. Terry Madonna, director of the Center for Politics and Public Affairs at Franklin and Marshall College, whose polling has had Specter solidly ahead for months. "He didn't even make any inroads ... How do you scratch your head and figure that out? Gee, if they don't like Specter and they're clearly having trouble with him, then why are they not just turning to the other guy?"

Part of the reason, political operatives say, is the dogged way Specter went about making nice with his new fellow Democrats as soon as he switched sides last year. He already used to visit all 67 of the state's counties every year; in 2009, he made a special point of greeting the party's powerbrokers in each. "He has for years and years and years and years been the hardest-working man in Pennsylvania," said Philadelphia-based Democratic consultant Dan Fee, who isn't working for either campaign but has worked for Gov. Ed Rendell, who's backing Specter. "Have you ever been to some of these counties? I bet he's met every person in some of these counties, because there's just not a lot of people." It paid off — the state's Democratic Party Central Committee endorsed him with 77 percent of the vote last month, and several unions and local party committees followed suit.

That political legwork was matched by a convert's zeal for causes close to Democratic primary voters' hearts. Specter came out aggressively for a public option in healthcare reform, then trucked around the state in August defending the plan at tea-party-packed town halls. He opposed the Obama administration's troop surge in Afghanistan. He started voting early and often with the party leadership in the Senate, and not just on the procedural motions, either.

And somehow or another, he appears to have convinced a fair number of the state's Democrats that he's one of them. (Of course, he may have already been more popular with Democrats by the time he left the GOP than he was with Republicans.)

"You can't get the endorsement of the state party here by a 77-23 margin without attracting support from all groups within the party," said Chris Nicholas, Specter's campaign manager. "We've reached out, we've done our homework, we've dotted our I's, crossed our T's."

Sestak aides say the campaign hasn't really been joined in full yet. Both sides have buckets of cash on hand, though Specter has more, $8.7 million to Sestak's $5.1 million as of Dec. 31. Most voters outside Sestak's House district still don't really know who he is; when the campaigns start airing TV ads, the polls should narrow. Sestak's aides say Specter's support is relatively soft, and that if they can remind voters what they don't like about the incumbent, they should win.

"The horse race numbers are going to go up and down," said Sestak spokesman Jonathan Dworkin. "What hasn't changed is that Pennsylvanians are looking for a new generation of leadership."

But the last few weeks, Sestak hasn't succeeded in keeping the focus on Specter. The challenger accused the White House of trying to buy him out of the race with a job but never provided specific proof. Then he got suckered into a debate over whether he pays his campaign staff minimum wage or not, after campaign finance reports showed 10 of Sestak's 16 employees made less than $7.25 an hour (and one made about $2.23 an hour).

And Sestak may not have been a particularly easy sell as the great liberal hope in the primary to begin with. ProgressivePunch ranked him 161 out of 253 House Democrats, based on his voting record. At last summer's Netroots Nation, Sestak faced tough questions about whether he'd still back progressive causes if he won the nomination.

Whoever wins the primary will go on to face Republican Pat Toomey in the general election. Toomey, who nearly beat Specter for the GOP nomination in 2004, has been running around gleefully bashing both of them, effectively unchallenged, for months. Specter's staff, at least, is talking like they're already looking ahead. "It's kind of like we're in the pregame ceremony," Nicholas said. (UPDATE: Nicholas e-mailed after this story was published to clarify that he meant the campaign was in the pregame ceremony before the primary, not before the general election.)