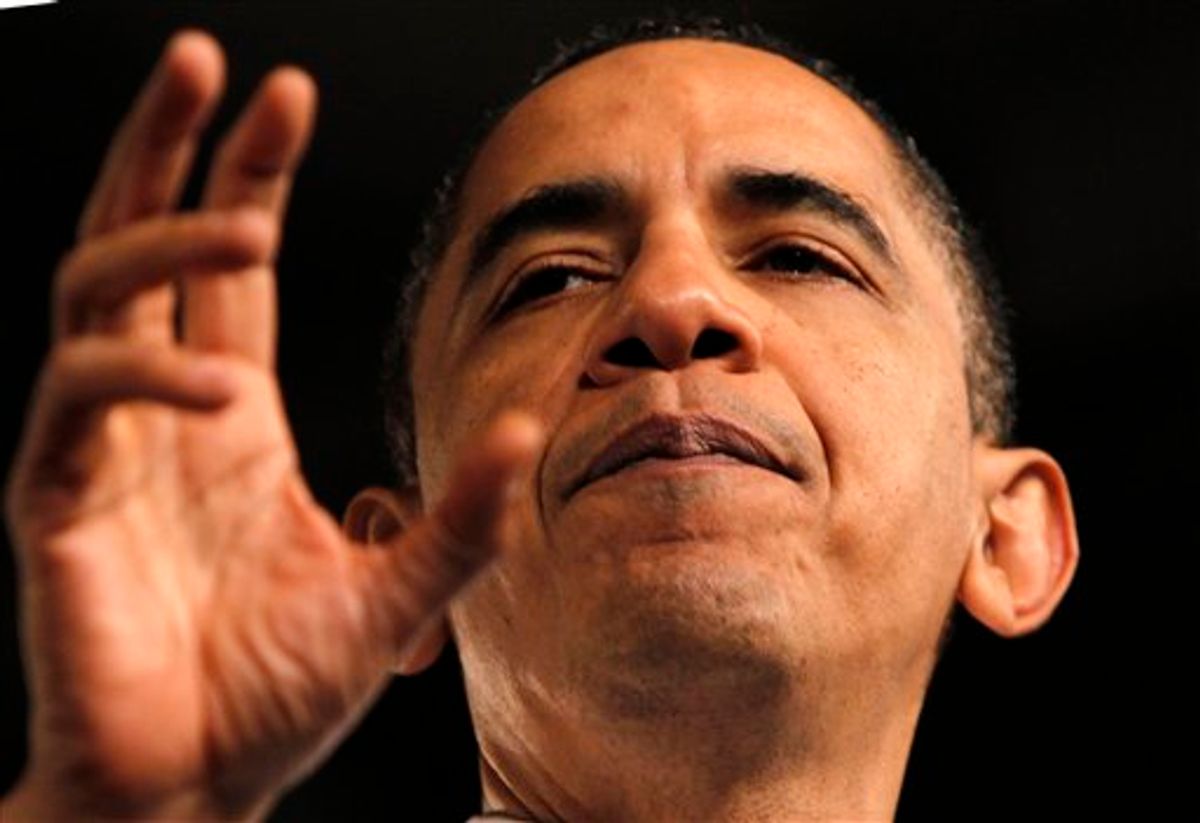 One of the principal weapons used by the Bush administration to engage in illegal surveillance activities -- from torture to warrantless eavesdropping -- was its refusal to brief the full Congressional Intelligence Committees about its activities.  Instead, at best, it would confine its briefings to the so-called "Gang of Eight" -- comprised of 8 top-ranking members of the House and Senate -- who were impeded by law and other constraints from taking any action even if they learned of blatantly criminal acts.

This was a sham process:  it allowed the administration to claim that it "briefed" select Congressional leaders on illegal conduct, but did so in a way that ensured there could be no meaningful action or oversight, because those individuals were barred from taking notes or even consulting their staff and, worse, because the full Intelligence Committees were kept in the dark and thus could do nothing even in the face of clear abuses.  The process even allowed the members who were briefed to claim they were powerless to stop illegal programs.  That extremely restrictive process also ensures irresolvable disputes over what was actually said during those briefings, as illustrated by recent controversies over what Nancy Pelosi and other leading Democrats were told about Bush's torture and eavesdropping programs.  Here's how Richard Clarke explained it in July, 2009, on The Rachel Maddow Show:

MADDOW:  Do you think that the current system, the gang of eight briefing system, allows the CIA to be good at spying and to be doing their work legally?

The congressman can‘t keep the briefing. They can‘t take notes. They can‘t consult their staff. They don‘t know what the briefings are about in advance. It's a box check so that the CIA can say it complied with the law. It's not oversight. It doesn't work.

To their credit, Congressional Democrats -- over the objections of right-wing Republicans -- have been attempting since the middle of last year to fix this serious problem, by writing legislation to severely narrow the President's power to conceal intelligence activities from the Senate and House Intelligence Committees and abolish the "Gang of Eight" process.  After all, those Committees were created in the wake of the intelligence abuses uncovered by the Church Committee in the mid-1970s, and their purpose is "to provide vigilant legislative oversight over the intelligence activities of the United States to assure that such activities are in conformity with the Constitution and laws of the United States."  But if they're not even told about what the Executive Branch is doing in the intelligence realm, then they obviously can't exert oversight and ensure compliance with the law -- which is the purpose of keeping them in the dark, as the last decade demonstrated.

Yet these efforts to ensure transparency and oversight have continuously run into one major roadblock:  Barack Obama's threat to veto the legislation.  Almost immediately after leading Democrats on the Intelligence Committee unveiled their legislation last year, the Obama White House issued a veto threat with extremely dubious (and Bush-replicating) rationales:  such oversight would jeopardize secrecy and intrude into "executive privilege."  In response to Obama's veto threat, Democrats spent the last nine months accommodating the White House's objections by significantly diluting their legislation -- their new bill would actually retain the "Gang of Eight" briefings but impose notification and other oversight requirements -- and two weeks ago the House passed that diluted bill.

But no matter:  as Walter Pincus reports today in The Washington Post, Obama is now threatening to veto even this diluted bill, and is echoing GOP talking points when doing so:

The White House has renewed its threat to veto the fiscal 2010 intelligence authorization bill over a provision that would force the administration to widen the circle of lawmakers who are informed about covert operations and other sensitive activities. . . .

In a letter sent to the senior members of the intelligence panels, Office of Management and Budget Director Peter R. Orszag said Gang of Eight notifications are made in only "the most limited of circumstances" affecting "vital interests" of the United States, arguing that the new requirement would "undermine the president's authority and responsibility to protect sensitive national security information."

Orszag also opposed a Senate bill provision that required notification of "any change in a covert action," which he described as setting up "unreasonable burdens" on the agencies, particularly the CIA . The House bill also requires notification of intelligence "significant undertakings," a term that Orszag described as "vague and uncertain."

Rep. Peter Hoekstra (R-Mich.), ranking minority member of the House intelligence panel, noted that the White House objections were similar to those raised by Republicans, especially regarding notifications provisions. . . .

Orszag wrote that the notification provisions were one of three items in the bills that would draw a veto recommendation from the president's advisers. Another such provision would give the Government Accountability Office legal authority to review practices and operations throughout the intelligence community. The White House contends that broadening the GAO's purview would upset current relations with the office, which already has access to some intelligence activity, and adversely affect oversight relationships between the committees and the community. The provision would also permit any committee of Congress with an arguable claim of jurisdiction over an intelligence activity to request a GAO investigation of that activity.

In other words, the Obama White House -- just as was true for the Bush White House, and using the same rationale -- does not want any meaningful oversight (i.e., briefings beyond the absurd Gang of Eight sham) on whether it's breaking the law in the conduct of its intelligence activities.  One of the Intelligence Community's most loyal Congressional servants -- Senate Intelligence Committee Chair Dianne Feinstein -- told The Post that she thinks a deal can be worked out with the White House, meaning that the bill needs to be diluted even further, to the point of virtual nothingness, in order for the White House to accept it.

It's critical to note that this is far from an abstract concern, because the Obama administration has almost certainly been hiding intelligence activities from the Intelligence Committees, thus ensuring it operates without oversight.  Read this October, 2009 article from The Hill -- headlined:  "Feingold sees similarities between Bush and Obama on intelligence sharing" -- in which Senate Intelligence Committee Member Russ Feingold explains "his suspicion that the Obama administration is continuing some of the stonewalling practices of the George W. Bush administration when it comes to providing full intelligence briefings to the relevant committees in Congress."  And indeed, all year long, there's been a series of disclosures about highly controversial intelligence programs that appear to be "off-the-books" and away from the oversight of the Intelligence Committee.  In late January, it was revealed that the President was maintaining a "hit list" of American citizens he had authorized to be assassinated far from any "battlefield," followed by yesterday's story describing the use of shadowy private contractors to collect intelligence in Pakistan and Afghanistan.

All of this is sadly consistent with the Obama administration's devotion to extreme levels of secrecy and resistance to oversight.  Last month, Eli Lake reported that Obama has simply failed to make a single appointment to, or even activate the budget of, the The Privacy and Civil Liberties Oversight Board, the body created pursuant to the report of the 9/11 Commission to safeguard civil liberties in intelligence activities; it has thus been completely dormant.  And, with a few very mild exceptions, Obama -- since he was inaugurated -- has affirmatively embraced one radical secrecy doctrine after the next that used to be controversial among Democrats (back when Bush used them).

The refusal of the Bush administration to brief the Intelligence Committees on its most controversial intelligence programs was once one of the most criticized aspects of the Bush/Cheney obsessions with secrecy, executive power abuses, and lawlessness.   The Obama administration is now replicating that conduct, repeatedly threatening to veto legislation to restore real oversight.

UPDATE:  Marcy Wheeler notes what is probably the worst part of all of this, something I consider truly despicable:  the administration is also threatening to veto the bill because it contains funding for a new investigation of the 2001 anthrax attacks, on the ground that such an investigation -- in the administration's words -- "would undermine public confidence" in the FBI probe of the attacks "and unfairly cast doubt on its conclusions."

As I've documented at length, not only are there enormous, unresolved holes in the FBI's case, but many of the most establishment-defending mainstream sources -- from leading newspaper editorial pages to key politicians in both parties -- have expressed extreme doubts about the FBI's case and called for an independent investigation.  For the administration to actively block an independent review of one of the most consequential political crimes of this generation would probably be its worst act yet, and that's saying quite a bit.

UPDATE II:  On the same day he threatened to veto this oversight and transparency legislation, President Obama issued a proclamation celebrating "Sunshine Week" and hailing himself and his administration as "the most open and transparent ever."  He further praised himself as follows:  "We came to Washington to change the way business was done, and part of that was making ourselves accountable to the American people by opening up our government."