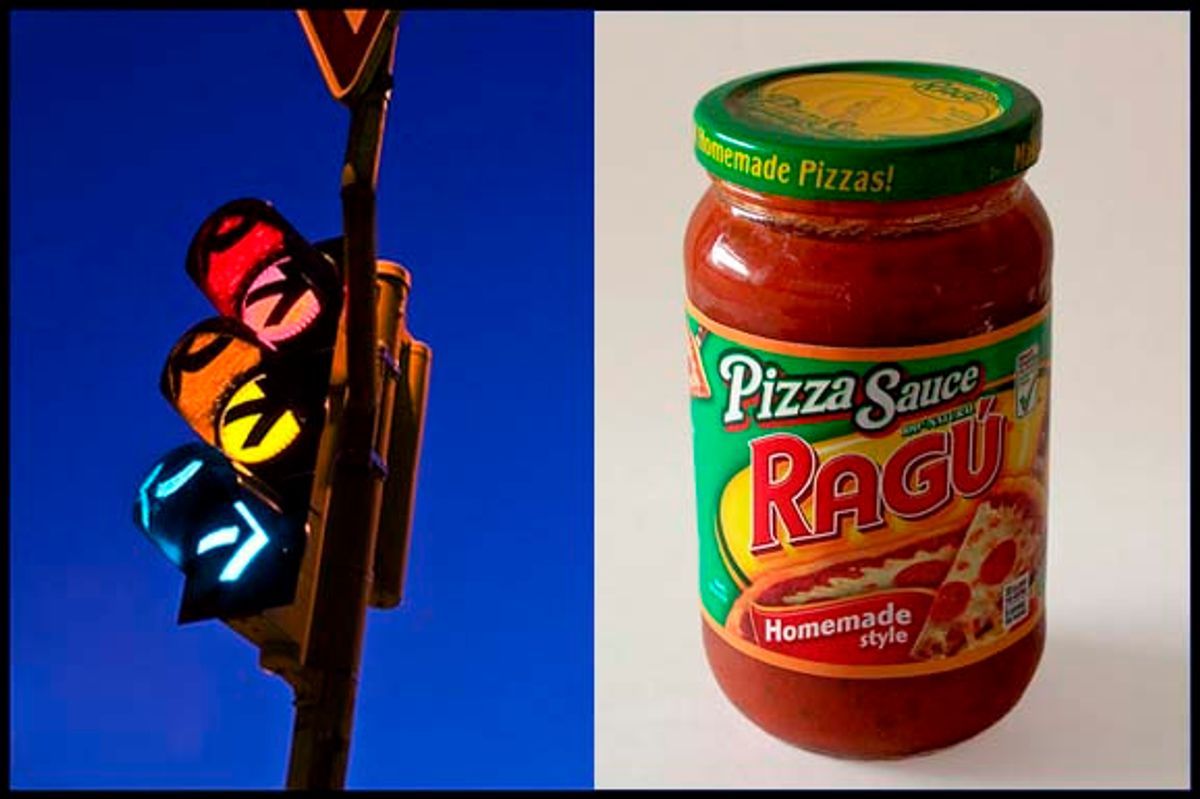 The past few weeks, there's been a considerable amount of chatter about American food labeling. Earlier this month, the FDA warned several companies about their misleading food labels, and the agency is currently pursuing an initiative to change the way American labels work. Possible changes include moving products' nutrition and ingredient information to the front of each package, and changing the serving sizes to more accurately reflect the amounts that average Americans eat. Meanwhile, the Institute of Medicine is investigating packaging symbols and logos, which are a "major consideration for consumers in making food purchases."

But none of this is as drastic as what's currently being considered in the European Union. As Time magazine reports, the Europeans are currently exploring their own labeling options to help stem the continent's expanding waistline -- and one is particularly dramatic:

The most controversial of the proposals so far is a flashy label backed by health and consumer groups that's based on the colors of a traffic light. Already fixtures in many British supermarkets, the labels use red, yellow and green circles to indicate how healthy products are in four categories: fat, saturated fat, sugar and salt. If a box of cookies is high in sugar, for instance, it'll get a red light.

Imagine a supermarket aisle filled with red, yellow and green lights -- it certainly sounds effective, doesn't it? As Time's Cendrowicz points out, a study in Australia found that people were "five times more likely to identify healthy food options when they see color-coded nutrition labels." Unsurprisingly, the European food and drink industry isn't too pleased with the idea (arguing, instead, that companies should be allowed to choose their own labels -- to avoid making "blanket judgements about foodstuffs.") Given the strength of the American food lobby, it's pretty unimaginable that anything like this would ever become a possibility in the U.S.

But as Brian Wansink, the director of Cornell's Food and Brand Lab, suggested to Francis Lam a few months ago, anti-obesity campaigns aren't often effective with the people who need it most -- those who don't pay attention to nutrition guidelines to begin with. The real work, Wansink suggested, needs to be done by parents: "So much goes back to what we do in our homes. We keep believing, 'It's not me, it's the fast food industry, the soda industry, etc.' But once a parent or nutritional gatekeeper realizes that they control 72 percent of what their family eats, then it can be like, 'Wait, there're a lot of small things I can do.'"