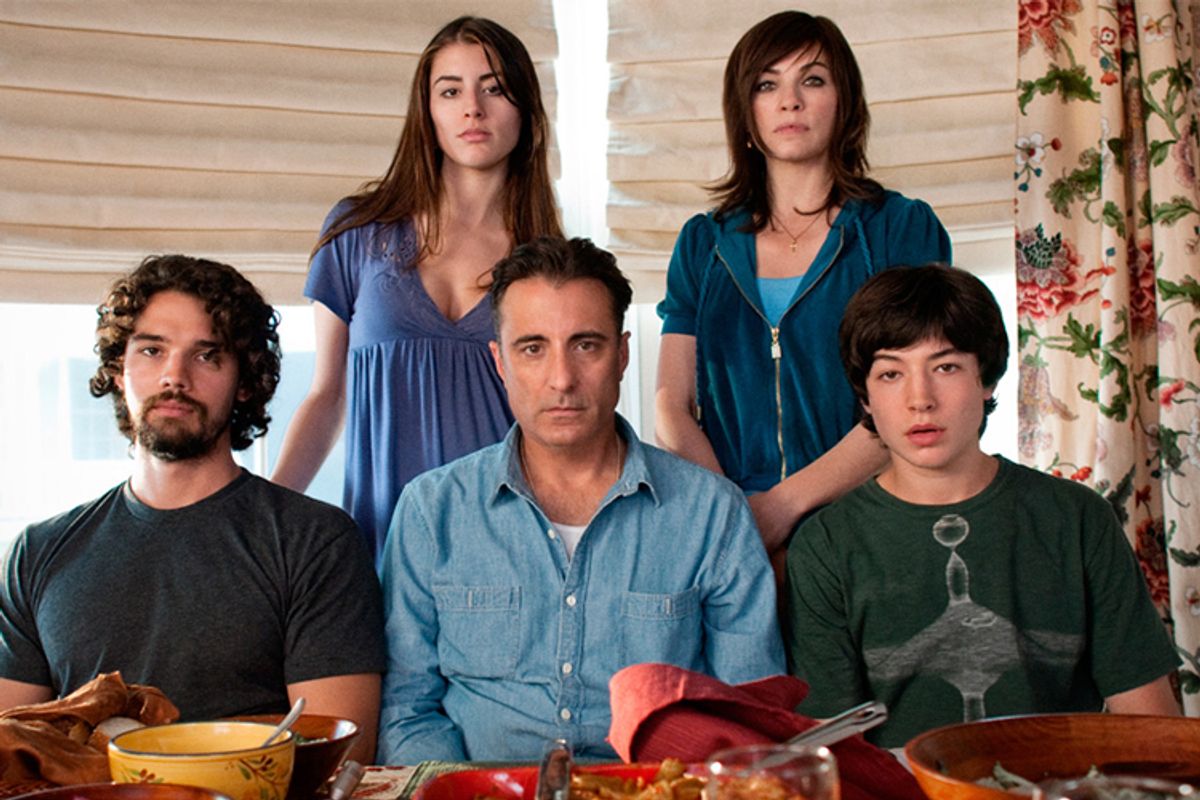 Since the writer and director of "City Island," Raymond De Felitta, has been blogging on Salon over the past few weeks about how he cast, financed and made the film, it might have been pretty awkward if I'd seen it and really hated it. In the spirit of De Felitta's frank and entertaining posts, I'll add that I simply wouldn't have written anything about it. If he or his publicist had asked, I'd have blamed it on some ass-covering "editorial decision" made from above. Nothing to do with me, Raymond!

Fortunately, "City Island" is pretty damned irresistible. What begins as a winning workout in a highly familiar genre — the white-ethnic, big-city family comedy — gradually gains both screwball momentum and emotional power, and delivers an unexpected punch by the time it reaches its climactic pileup of characters and revelations. As a filmmaker, De Felitta isn't Antonioni, but he doesn't aspire to be. Instead, he's a witty and economical craftsman of comic narrative. Even if I didn't know he was an aficionado of classic Hollywood movies, I'd see the influence of, say, George Cukor and James L. Brooks.

In an earlier era, De Felitta's obvious talent for audience-pleasing material (his previous movies include the Sundance award-winner "Two Family House" and the jazz documentary "'Tis Autumn: The Search for Jackie Paris") might have launched him on a career making big-budget romantic comedies with A-list stars. He may get that chance, but the fact that he's a relative outsider who struggled for years to make a $5 million indie — grabbing Julianna Margulies for a leading role about a week before shooting started — tells you something about Hollywood then and now. (I'm not saying De Felitta has anything to complain about; he doesn't. My point is that what used to be mainstream entertainment has almost become art-house fare.)

"City Island's" eponymous setting is a geographical oddity, a little fragment of New York City that's just offshore from the Bronx, in Long Island Sound. It may be stretching the truth these days to describe it as a "fishing village," as City Island native and correctional officer Vince Rizzo (Andy Garcia) does in an opening voiceover, but it certainly used to be one. Plenty of New Yorkers have never been there and couldn't find it on a dare. As Vince's clandestine gal-pal Molly (Emily Mortimer) observes when he tells her about the place, its name contains two words with opposite affects, words that seem to contradict each other. (De Felitta's characters have a Woody Allen-esque tendency to slip into quasi-literary authorspeak once in a while; for the most part, I find this endearing.)

Now, as for Vince's clandestine gal-pal — it's not what you think. It's definitely not what Vince's sharp-tongued wife, Joyce (Margulies, resplendent in a straight-haired wig and designer jeans), thinks. De Felitta relies on the hoariest of comic-confusion structures, one that goes back well beyond Shakespeare: We understand what's going on in the Rizzo household, but everybody in the story is fatefully deluded. Vince isn't sleeping with Molly, although there's a tender ambiguity to their relationship that I really enjoyed, exactly the sort of unresolved sexual tension that American movies rarely permit to linger in the air between people. They're in an acting class together (taught by a grumpus-oid Alan Arkin), as Vince pursues his long-abated dream of becoming the next Brando.

Vince and Joyce both think their daughter, Vivian (the lovely Dominik Garcia-Lorido, Andy Garcia's real-life kid), is away at college, when she's actually stripping for Asian businessmen at a bump-and-grind bar. They definitely don't know about the, um, blossoming sexual appetites of their wiseass son, Vince Jr. (Ezra Miller). All I'll say about that is that De Felitta breaks new comic ground here: fat-chick humor, made politically acceptable! And exactly who is Tony Nardella (Steven Strait), the buff young parolee whom Vince takes in, straight out of the prison where he works? Well, we know, of course — but Joyce is thinking, hey, her husband's probably stepping out on her, and this kid sure looks good with his shirt off.

All this begins as fairly broad humor, with the beats arriving like clockwork and the audience enjoying its privileged position. (All of them smoke! And all of them pretend they don't!) Gradually and almost imperceptibly, De Felitta ramps up the comedy of errors into a more painful and personal realm, where each character reveals a fundamental loneliness. To my taste, Garcia hams it up too much in portraying Vince as a comic working-class boob, but the scene when he finally confesses to Molly all the things he can't tell Joyce is perfectly lovely.

Margulies, always an arresting performer, gets to play almost every scene driven by high emotion — righteous anger, wounded pride, pure lust — and possesses each of them in turn. De Felitta is generous in providing mini narrative arcs to his supporting cast, and he gets terrific performances out of Garcia-Lorido and Miller in what could have been afterthought misunderstood-teen roles. All the family secrets must come crashing together, of course, in an implausible, if impeccably crafted, collision of botched confessions, mistaken identities, handcuffs and risqué outfits.

For me, though, it's Mortimer's delicate performance as Molly that lends this comedy its most profound sense dimension, by weaving through it a nearly invisible thread of tragedy. This rueful Anglo-wraith observer may or may not be burning an unrequited torch for Vince (I vote for yes), but either way she's pretending to be somebody she's not. That's also true of everyone else in the movie — and indeed all of us, De Felitta seems to suggest — but the members of the Rizzo family remain tied to each other, for better or worse. While they fight it out and lurch their way toward a happy-unhappy, comic-dramatic ending, Molly melts into the night, alone in the city and without an island to call home.

"City Island" is now playing in New York and Los Angeles, with wider release to follow.