A wild day on Capitol Hill 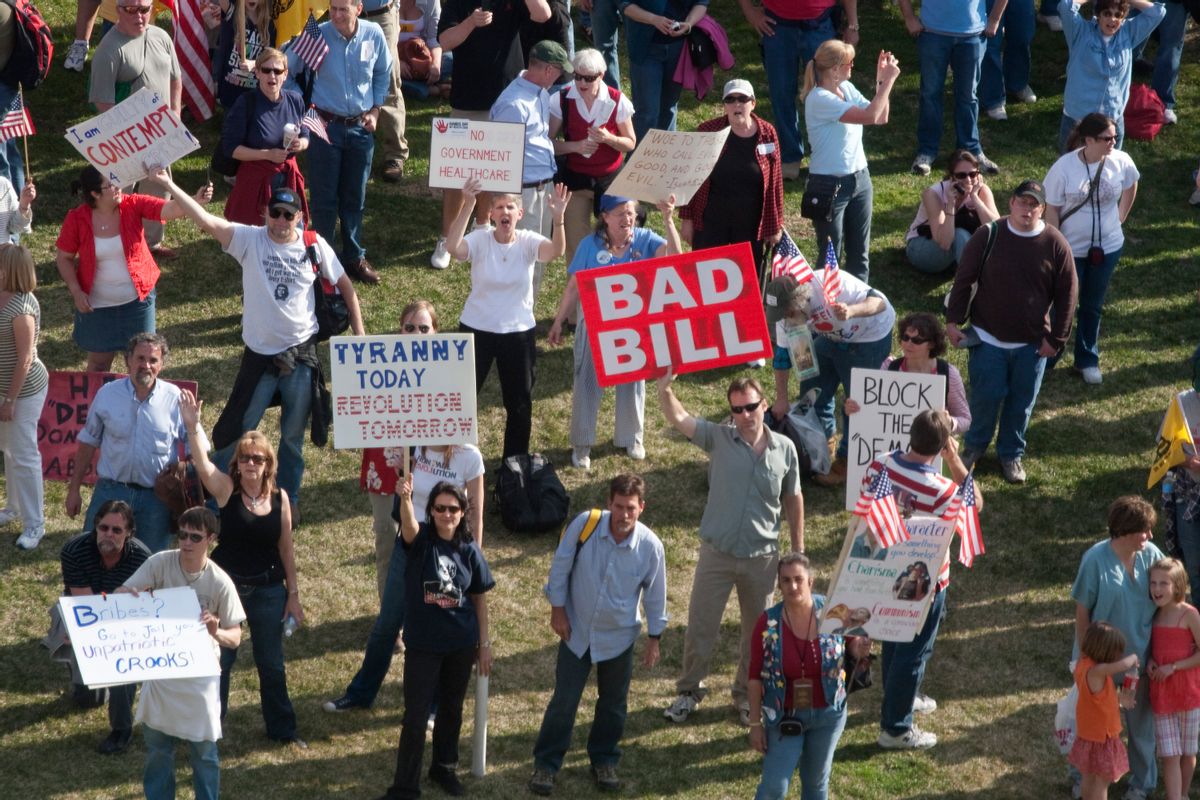 7:05 p.m.: The office of Rep. Emanuel Cleaver, D-Mo., has released this statement about the incident in which a protester spat on him:

For many of the members of the CBC, like John Lewis and Emanuel Cleaver who worked in the civil rights movement, and for Mr. Frank who has struggled in the cause of equality, this is not the first time they have been spit on during turbulent times.

This is not the first time the Congressman has been called the "n" word and certainly not the worst assault he has endured in his years fighting for equal rights for all Americans. That being said, he is disappointed that in the 21st century our national discourse has devolved to the point of name calling and spitting. He looks forward to taking a historic vote on health care reform legislation tomorrow, for the residents of the Fifth District of Missouri and for all Americans. He believes deeply that tomorrow's vote is, in fact, a vote for equality and to secure health care as a right for all. Our nation has a history of struggling each time we expand rights. Today's protests are no different, but the Congressman believes this is worth fighting for.

6:10 p.m.: When it comes to undecided House Democrats announcing their votes, there's been a run of good news for supporters of the reform bill. Saturday evening, the trend was broken by Rep. Zack Space, D-Ohio. A yes vote last year, he's voting no on Sunday.

5:10 p.m.: A lot of reports coming in of some real nastiness from Tea Party protesters on the Hill today. Rep. Andre Carson, D-Ind., has said that one protester called Rep. John Lewis, D-Ga., the n-word. (That report, if true, is particularly ironic and disturbing considering Lewis' history as a major civil rights leader.) Another protester reportedly called Lewis a "baby killer."

Rep. James Clyburn, D-S.C., the House majority whip, told reporters, "I heard people saying things that I have not heard since March 15, 1960 when I was marching to try and get off the back of the bus." A staffer from his office also reported that Rep. Emanuel Cleaver, D-Mo., was spat upon.

4:24 p.m.: Wrapping up his address to House Democrats, Obama leads them in a chant of, "Fired up! Ready to go!"

The president arrived on Capitol Hill only after leadership was fairly sure the votes would be there Sunday. And he told lawmakers that the vote would be "a chance to vindicate all those best hopes that you had about yourself and about this country."

"We have been debating healthcare for decades," Obama said, looking back on the long history of attempts to get universal coverage, and on the time this particular legislation has been worked on. "It has now been debated for a year. It is in your hands. It is time to  pass healthcare reform for America, and I am confident that you are going to do it tomorrow."

4:16 p.m.: Obama acknowledges that the healthcare bill isn't exactly what most of the House Democrats who are poised to vote on it Sunday would prefer. "Now, is this bill perfect?" he asked. "Of course not. Will this solve every single problem in our healthcare system right away? No."

4:09 p.m.: As Obama speaks to Democrats in the Capitol Visitor's Center, tea partiers outside the Capitol are chanting just as loudly as ever. Sitting in the press gallery, just outside the House chamber, I can hear frequent cheers and refrains of, "Kill the bill! Kill the bill!" But it's probably too late -- Obama, and Democratic leaders, are talking about the bill as if they're sure the votes are there.

4:02 p.m.: President Obama is telling Democrats not to listen to Republicans offering political "advice" about the healthcare reform bill. "They're all warning you of the horrendous impact if you support the legislation," he said. "Now, it could be that they are suddenly having a change of heart, and they are deeply concerned about their Democratic friends... That's a possibility."

But it's just as likely, he said, that the GOP is worried about what happens to Republicans if the bill passes. "They know that after this legislation passes and I sign the bill... lo and behold, nobody's pulling the plug on Granny."

3:46 p.m.: Senate Majority Leader Harry Reid, D-Nev., just promised House Democrats he'd get the budget reconciliation fixes through. "We need a simple majority to make a good law even better," he told the conference, before President Obama speaks. "So I'm happy to announce I have the commitment of a majority of the United States Senate to make that good law even better."

3:35 P.M.: New yes votes have started rolling in. Rep. Peter DeFazio, D-Ore., voted yes in the fall but had said recently that he was leaning towards no -- he's going to be a yes. So are Reps. Chris Carney, D-Pa., who was part of the Stupak anti-abortion group, and Henry Cuellar, D-Texas.

President Obama is expected to arrive at the Capitol any moment to talk to House Democrats. He's bringing along an entourage, too -- Secretary of Health and Human Services Kathleen Sebelius, budget director Peter Orszag and Senate Majority Leader Harry Reid will also be at the meeting.

Democratic leaders are more and more confident of passage. "Clearly, we believe we have the votes," House Majority Leader Steny Hoyer told reporters just before Obama showed up. So Obama's talk to the conference may be more of a rally than a last-ditch attempt at swinging votes. "This is rah, rah, sis boom bah," Rep. Alcee Hastings, D-Fla., said on his way to the meeting.

Meanwhile, leadership decided to abandon the "deem and pass" tactic they were considering; pro-choice lawmakers seem to have won a battle with anti-abortion Rep. Bart Stupak, D-Mich.; and hordes of tea partiers are gathering on Capitol Hill to protest the whole thing. For earlier coverage from Saturday, click here.