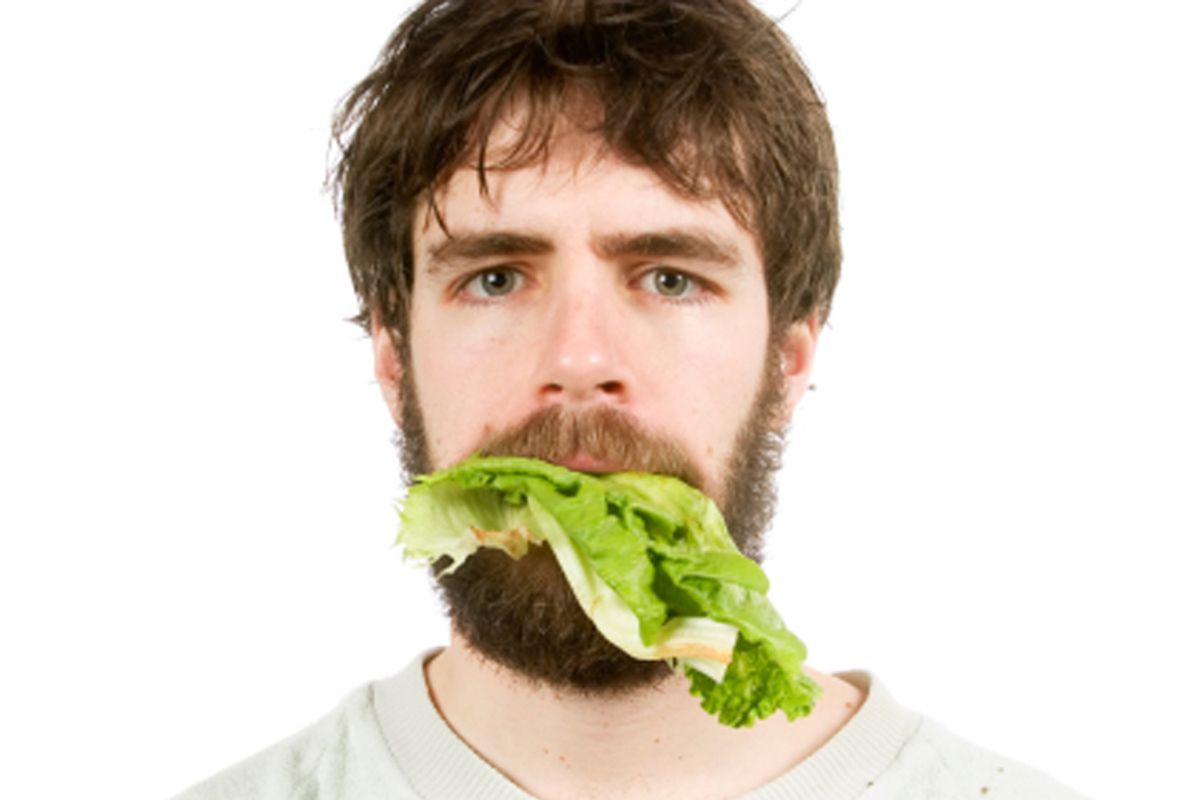 Not to be outdone by the New York Times Style section's seemingly inexhaustible capacity for coining ridiculous words (see blipster, recessionista), the Boston Globe has a trend piece today that contains one of the most entertaining food-related neologisms in recent memory. In the article, the Globe's Kathleen Pierce writes about the supposed hot new trend of the male vegan -- men who refuse to eat meat and animal products and yet somehow manage to hold on to their masculinity. And because male vegan is far too unwieldy, she's invented a new word: hegan.

What is a hegan, you might ask? They are, Pierce claims, "the new face of veganism": "Men in their 40s and 50s embracing a restrictive lifestyle to look better, rectify a gluttonous past, or cheat death. They are hegans. They are healthy. And they are here to stay." Hegans aren't interested in the principles of veganism, or saving their environment, or wearing extravagantly colored vegan tunics -- they're just interested in living longer. (Men quoted in the piece tout veganism's supposed ability to prevent cancer, diabetes and heart disease.)

And no, these are not the effete, flouncing vegans of yore -- they are cops, and firefighters, and, most manly of all, men who skate on ponds. Case in point: Joe McCain, a mid-40s Somerville police detective whose weight problems -- he once loved pizza, steak and fried foods -- led him to "cut meat, dairy, eggs, chicken and fish from his diet and [add] power vinyasa yoga, which helped him shed 60 pounds in eight months." Or what Pierce calls "the ultimate hegan," Rip Esselstyn, a veteran Texas firefighter who convinced his department to shun animal protein -- and turned his idea into a diet book called "The Engine 2 Diet."

Unfortunately, Pierce admits, there are "no hard numbers on how many hegans exist." This is unfortunate, because when promoting arbitrary trends, it's often useful to have hard figures. (The entire trend piece, as it turns out, is based on anecdotal interviews with male vegans or vegan establishment owners.) Of course, that doesn't mean that male vegans aren't really on the increase -- the growth of yoga culture and Michael Pollan-esque food politics have doubtless made it more and more acceptable for men to make educated eating choices, and statistics have shown that even if men aren't going vegan, they're spending more time in the kitchen.

And of course, it makes sense for the Globe to be inventing ridiculous new terms. People talk about it, blog about it, and if the newspaper is lucky, even begin using it in everyday speech. And, all things said, the succinct catchiness of the word is almost enough to forgive the weaknesses of the  article. I can already hear vegan hipsters in Williamsburg and Silver Lake ironically referring to themselves as "hegans" -- which, put in the manliest way possible, is actually kind of fabulous.