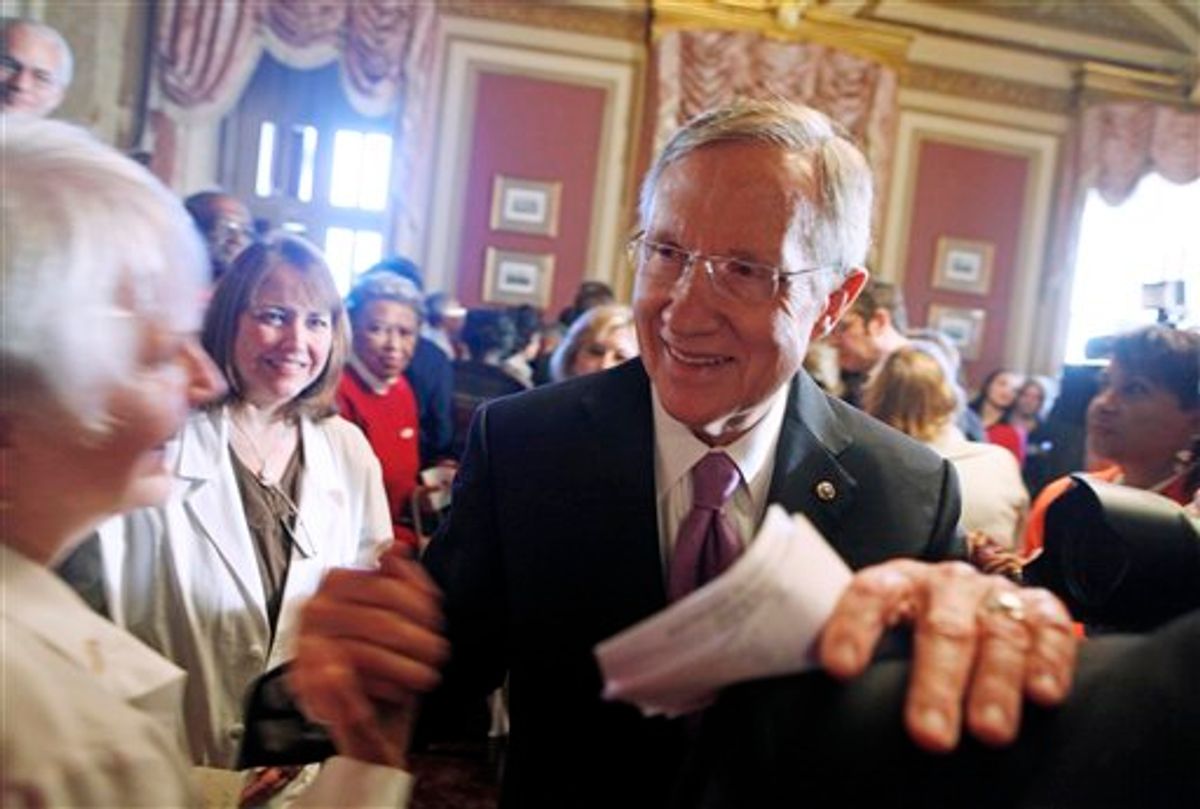 After completing a marathon vote-a-rama Wednesday night, the Senate is about halfway done with Thursday morning's amendments to the healthcare reconciliation bill. Overnight, Republicans finally won a battle, getting the Senate parliamentarian to agree with them that two parts of the bill dealing with an overhaul of federal student loans violated the rules of the budget reconciliation process. That means the bill will have to go back to the House for another vote Thursday night before it can be sent to President Obama. Follow the bill's progress here throughout the day.

3:16 p.m. Eastern: Democrats cleared out of the Senate after the vote for a congraulatory press conference. The House is preparing to deal with the bill shortly.

Things felt a little anti-climactic with the reconciliation vote; the House had already approved the far more sweeping healthcare reform bill, there was no doubt the Senate would pass this bill and it's not even the moment for the history books, because the House has to pass the amended version again later in the afternoon.

Still, the Democratic press conference ended with a big round of applause for Senate Majority Leader Harry Reid, D-Nev. The House and Senate dueled back and forth for months over the bill, trying to find a way to pass it,and Reid -- finally -- delivered in the end, which should help relations between Democrats in the chambers.

2:03 p.m. Eastern: The difference between the House and the Senate couldn't have been made more clear than by comparing the way the two chambers wrapped up their work on healthcare reform. While House Minority Leader John Boehner stormed off the floor on Sunday after shouting, "Hell no," Senate Republicans calmly thanked their staff and their Democratic colleagues for working professionally over the last year.

Senate Majority Leader Harry Reid, D-Nev., called for a moment of silence in the memory of Ted Kennedy. "I think it would be very appropriate, and I hope I won't offend anyone with this -- if I will, I don't mean to," Reid said. "I think it would be very appropriate right now to have a minute of silence." Republicans and Democrats alike stood quietly, heads bowed, and then Reid hugged Sen. Chris Dodd, D-Conn., one of Kennedy's close friends.

After that, Sen. Judd Gregg, R-N.H., the ranking GOP member of the Budget Committee, objected to the two education provisions that the parliamentarian said had to go, and Vice President Joe Biden officially removed them. "The point of order is sustained," Biden said. "Both provisions are stricken."

The Senate then began a formal roll call of all its members, who are voting from their desks, a procedure the chamber reserves for historic votes.

1:42 p.m. Eastern: Vice President Joe Biden is presiding over the Senate for its final vote on the healthcare reconciliation bill. Perhaps he'll remember to turn off his microphone before he evaluates how important the vote is.

1:29 p.m. Eastern: The Senate is in the final one of its votes on amendments now. So far, every single one of them -- more than 30 -- has been defeated. A handful of Democrats have been voting, occasionally, with the GOP on budget-related amendments: the most frequent defectors were Sen. Blanche Lincoln, D-Ark., Sen. Ben Nelson, D-Neb., and Sen. Evan Bayh, D-Ind. (who doesn't even have an election to worry about in the future).

A vote on final passage is expected in the next hour or so. That would send the bill back to the House for one last vote.

11:36 a.m. Eastern: Rep. Mike Pence, R-Ind., the third-ranking House GOP leader, took to the chamber's floor Thursday morning with an urgent message: bigotry is wrong, and hey, don't blame us for it.

"The American people don't want a government takeover of health care," Pence said. "The policy, the backroom deals and the arrogance have angered millions. But that is no excuse for bigotry, threats or acts of vandalism and I condemn such things in the strongest possible terms. People who engage in such acts undermine our cause and should be prosecuted to the fullest extent of the law. But I also rise to condemn the efforts to smear millions of law abiding Americans who oppose ObamaCare by associating them and their principled opposition with these criminal acts."

House Democrats came forward yesterday to report a growing number of threats and acts of violence against them since the bill passed, including a severed gas line at the home of Virginia Rep. Tom Perriello's brother. Pence's statement was an attempt to put some distance between the people responsible for those actions and the House Republicans who spent their weekend revving up a crowd of tea partiers outside the Capitol.

"The American people have every right to oppose this government takeover of health care without being lumped in with bigots and vandals by liberals in Congress and in the mainstream press," Pence said. "I say to my countrymen: End the threats. End the vandalism. And let's also end the smears of law-abiding citizens exercising their first amendment right to speech and peaceable assembly."

11:25 a.m. Eastern: Lawmakers worked until about 2:45 a.m. Eastern, then came back in at 9:45 a.m. to begin voting again. The GOP win wasn't a big one -- a total of about 16 lines will be stripped out of the bill, which runs 153 pages. But it was enough to delay final passage of the reconciliation measure a bit longer. The bill makes a series of changes to the healthcare law Obama signed on Tuesday, beefing up the subsidies to help people buy insurance, removing a special deal for Nebraska and changing a tax on expensive health insurance plans.

Democratic aides in the House say they're ready to vote on the bill again Thursday night -- any time between 5 p.m. and 10 p.m., depending on when the Senate sends it over and whether House Republicans try any last-ditch delaying tactics.