His outburst over the healthcare bill was bizarre. But his explanation of it was downright nutty 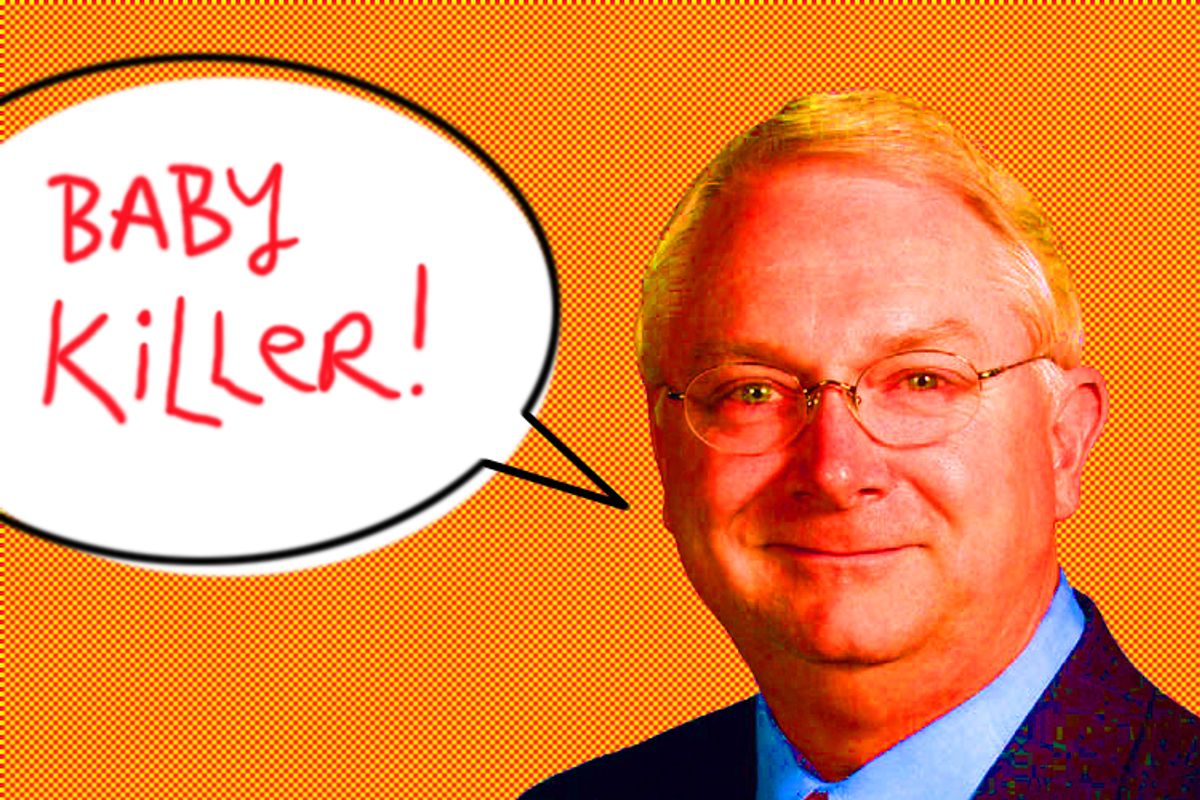 Rep. Randy Neugebauer proved two things this week: He's very angry, and he doesn't really care what anyone thinks about it.

The Republican from Texas was, understandably, furious this week over the way the healthcare bill that the House passed Sunday night compels all women in the U.S. to have abortions, at a budget-busting cost to taxpayers of $1.4 million per terminated pregnancy. What's that? The bill does nothing of the sort? Oh. Actually, Neugebauer was furious because the healthcare bill doesn't explicitly ban women from having abortions; conservatives felt the bill's language, which will require anyone who buys federally subsidized insurance through government-supervised exchanges to purchase separate policies if they want abortions covered, didn't go far enough in restricting abortion rights. And they thought the executive order on abortion that anti-choice Democrats wrestled out of the White House was a useless fig leaf. So Neugebauer, naturally, did what anyone on the losing side of a political argument in the Obama era would do: He yelled about it on the House floor. Hey, it worked for Joe Wilson, didn't it?

"Baby killer!" Neugebauer shouted at Rep. Bart Stupak, D-Mich., the leader of the conservative bloc that held the healthcare bill up until President Obama agreed to put out the executive order. And then he promptly hid for a day, as reporters and his fellow Republicans speculated wildly about who the shouter was. Finally, on Monday, he came forward.

Neugebauer's outrage itself seemed misplaced. Remember: Abortion won't be paid for with federal tax money as a result of the healthcare law. Of course, even if it did, there are a lot of things the federal government does with our tax dollars that a lot of people have moral — even quasi-religious — objections to; for instance, I'm not particularly happy when the taxes I pay are used to torture people, or to launch remote-controlled missiles at what sometimes turn out to be the wrong targets, but I don't get to veto the national security budget because of it. Considering that the majority of the House Democratic caucus — which is, after all, in control of the place — is pro-choice, Neugebauer should probably have been glad Stupak was able to extract the concessions he did, rather than shouting mad.

But it was what came after Neugebauer went public with his anger that was the craziest. It wasn't Stupak he was shouting at, Neugebauer explained; it was the bill. He hadn't yelled, "Baby killer," but rather, "It's a baby killer."

Which is, really, a pretty weak explanation coming from a guy who had a good 16 hours to think of something better, since he didn't come forward until he had the story prepared. Still, he went on Sean Hannity's Fox News Channel show and stuck to that line, as if he expected everyone to believe it:

I regret that it was an inference that I was talking about Congressman Stupak. I don't apologize for speaking what I thought was the truth. I believe this bill was a baby killer, and I'm not backing down or apologizing for that.

The fact that some thought I was speaking about Congressman Stupak, that was what I apologized to him about. But I'm not going to ever apologize for expressing my feelings on something as important as this piece of legislation.

He also posted a soft-focus video on his campaign Web site, which made it clear how little the "apologies" he had offered Stupak were worth. Neugebauer wasn't sorry; he was laughing all the way to the bank about the outburst. "Not only did we see the government takeover of your healthcare, but we saw the lives of unborn children used as a bargaining chip," Neugebauer said. "Donate," said the red banner at the top of the Web site that the video directed viewers toward. In the end, he'll make out just fine.