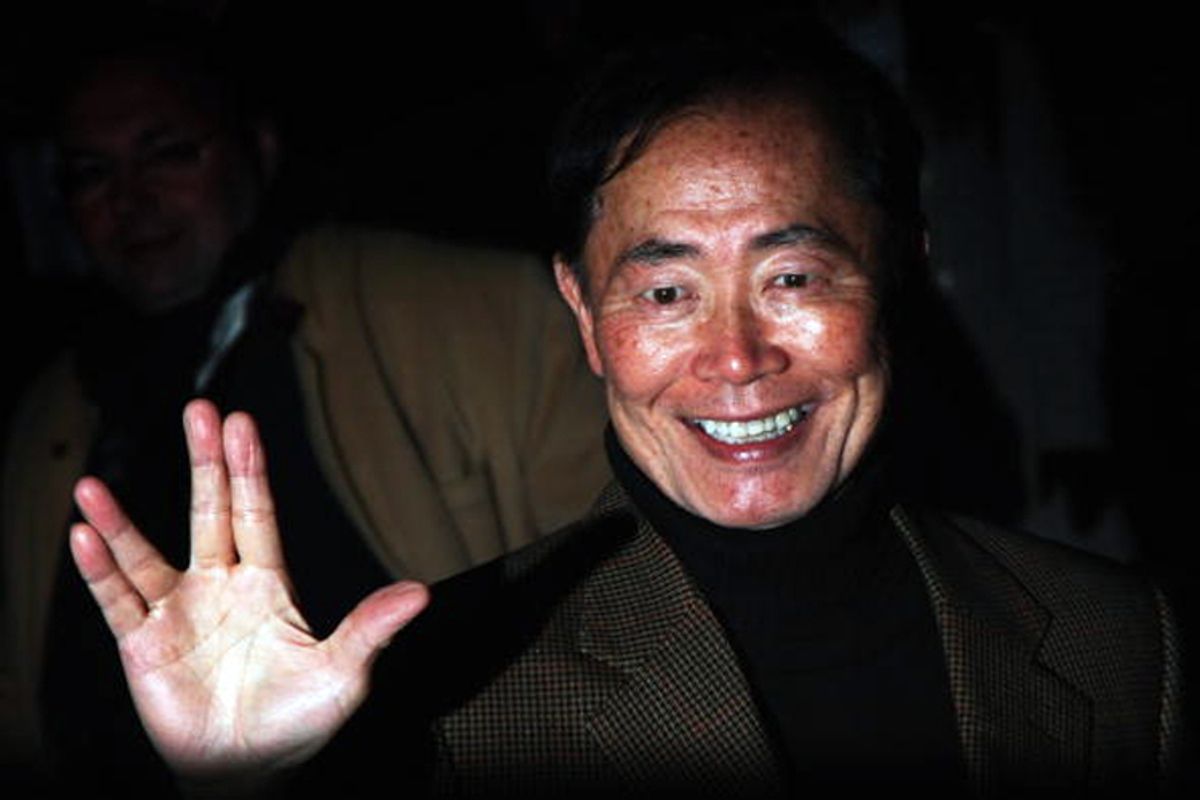 Of all the great things to come out of "Star Trek" -- Shatner, Klingon sideburns, nerd conventions -- who'd have guessed that right near the top of the list we'd find George Takei?

The once and eternal Mr. Sulu, for years relegated to the status of trivia answer, has in recent years attained a level of effortless cool that could annihilate an entire barful of Williamsburg hipsters. (Can we at least get him to try?) He's an in-demand pitchman and a witty fixture on talk shows. He's got a thriving acting career -- he just landed a part in the new Tom Hanks movie. And, in a role so unlikely it almost makes sense, he's a regular on "The Howard Stern Show." But most winningly, he's been able to parlay his role as part of a beloved cultural touchstone into not just a few more minutes of fame but a true platform for equality.

Since officially coming out of the closet five years ago, Takei became a deeply adored advocate of and spokesman for the Human Rights Campaign, showing up on more Pride Parade floats than the leather flag. And, as one of the elite group of Californians who married in the brief period after the state permitted same-sex unions and before it reversed their right to do so, he's become one of the most eloquent and high-profile voices of outrage over Proposition 8, calling it "a vote for discrimination."

His causes don't end at gay rights, though. Takei, who spent almost four years of his childhood in internment camps for Japanese Americans during World War II, is one of the founders and current board members of the Japanese American National Museum. But despite being a passionate voice against racial intolerance, he also cheerfully slips into the role of spokesman for Sharp's new four-color technology -- a system that introduces yellow.

That's the thing about Takei, a man who, well into his eighth decade, looks like he's just hitting his stride -- he knows how to pick his battles.  He'll gladly joke, as he did on Howard Stern's show on Tuesday, about all the anonymous sex he used to have in Central Park as a young man, saying, "You do some sleazy things in your wild years." He'll take ex-NBA star Tim Hardaway's remarks that he hates gay people as an opportunity to declare that gay people love Hardaway anyway -- in particular his "smooth chocolaty head, glazed in man sweat." He'll show up as half of "The Newlywed Game's" first gay couple. And he'll explain to same-sex partners how they can get themselves counted in the census, in an inimitably droll and slightly insane manner.

Why? Because he understands the disarming power of comedy for political change. Because he makes you see how ridiculous it is, even now, to detain Americans for their ethic heritage, how stupid and wrong it is to prevent two adults who love each from getting married. Because he's funny. Because even if you've worn the Starfleet uniform, life for a 72-year-old gay Asian can't always have been be a nonstop party of rainbows and tolerance. But with a mix of tireless advocacy, humor, and that fantastic, final frontier-ready voice, he's a shining example of how to boldly go through the golden years. Betty White, you've got competition.