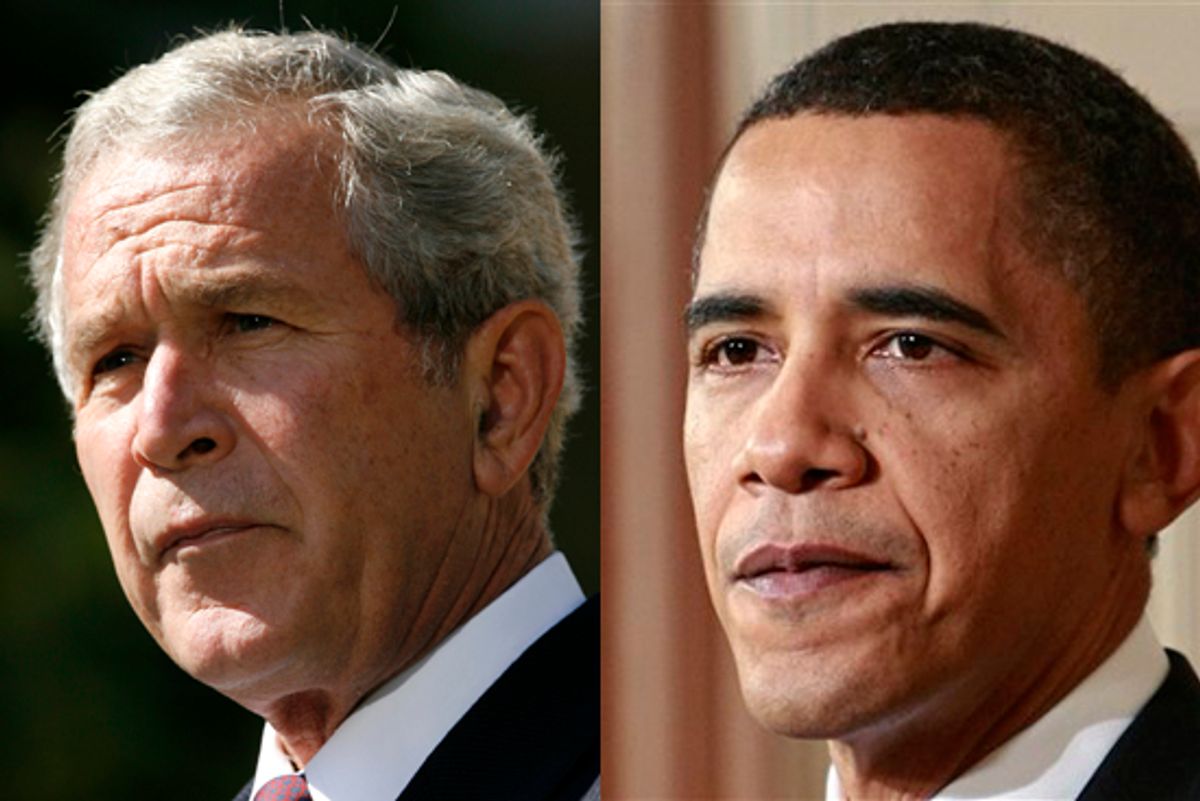 While torture and aggressive war may have been the most serious crimes which the Bush administration committed, its warrantless eavesdropping on American citizens was its clearest and most undeniable lawbreaking.  Federal District Judge Vaughn Walker yesterday became the third federal judge -- out of three who have considered the question -- to find that Bush's warrantless eavesdropping program was illegal (the other two are District Judge Anna Diggs Taylor and 6th Circuit Appellate Judge Ronald Gilman who, on appeal from Judge Taylor's decision, in dissent reached the merits of that question [unlike the two judges in the majority who reversed the decision on technical "standing" grounds] and adopted Taylor's conclusion that the NSA program was illegal).

That means that all 3 federal judges to consider the question have concluded that Bush's NSA program violated the criminal law (FISA).  That law provides that anyone who violates it has committed a felony and shall be subject to 5 years in prison and a $10,000 fine for each offense.  The law really does say that.  Just click on that link and you'll see.  It's been obvious for more than four years that Bush, Cheney, NSA Director (and former CIA Director) Michael Hayden and many other Bush officials broke the law -- committed felonies -- in spying on Americans without warrants.  Yet another federal judge has now found their conduct illegal.  If we were a country that actually lived under The Rule of Law, this would be a huge story, one that would produce the same consequences for the lawbreakers as a bank robbery, embezzlement or major drug dealing.  But since we're not such a country, it isn't and it doesn't.

Although news reports are focusing (appropriately) on the fact that Bush's NSA program was found to be illegal, the bulk of Judge Walker's opinion was actually a scathing repudiation of the Obama DOJ.  In fact, the opinion spent almost no time addressing the merits of the claim that the NSA program was legal.  That's because the Obama DOJ -- exactly like the Bush DOJ in the case before Judge Taylor -- refused to offer legal justifications to the court for this eavesdropping.  Instead, the Obama DOJ took the imperial and hubristic position that the court had no right whatsoever to rule on the legality of the program because (a) plaintiffs could not prove they were subjected to the secret eavesdropping (and thus lacked "standing" to sue) and (b) the NSA program was such a vital "state secret" that courts were barred from adjudicating its legality.

Those were the arguments that Judge Walker scathingly rejected.  All of the court's condemnations of the DOJ's pretense to imperial power were directed at the Obama DOJ's "state secrets" argument (which is exactly the same radical and lawless version, as TPM compellingly documented, used by the Bush DOJ  to such controversy).  From the start, the Obama DOJ has engaged in one extraordinary maneuver after the next to shield this criminal surveillance program from judicial scrutiny.  Indeed, their stonewalling at one point became so extreme that the court actually threatened the Obama DOJ with sanctions.  And what TPM calls the Obama DOJ's "Bush-mimicking state secrets defense" has been used by them in one case after the next to conceal and shield from judicial review a wide range of Bush crimes -- including torture, renditions and surveillance.  As the Electronic Frontiers Foundation put it:  "In Warrantless Wiretapping Case, Obama DOJ's New Arguments Are Worse Than Bush's."

That's why this decision is such a stinging rebuke to the Obama administration:  because it is their Bush-copying tactics, used repeatedly to cover up government crimes, which the court yesterday so emphatically rejected.  And it's thus no surprise that media accounts tie the Obama administration to the cover-up of this program at least as much as the Bush administration.  See, for instance:  Charlie Savage and James Risen in The New York Times ("A federal judge ruled Wednesday that the National Security Agency’s program of surveillance without warrants was illegal, rejecting the Obama administration’s effort to keep shrouded in secrecy one of the most disputed counterterrorism policies of former President George W. Bush"); Time ("The judge's opinion is pointed and fiercely critical of the Obama Administration's Justice Department lawyers" and "The judge claims that the Obama Administration is attempting to place itself above the law").  The 9th Circuit Court of Appeals also previously condemned the Bush/Obama "state secrets" position as abusive and lawless.

In December, 2005, The New York Times revealed that the Bush administration had been doing for years exactly that which the law unambiguously said was a felony:  eavesdropping on the electronic communications of Americans (telephone calls and emails) without warrants.  We knew then it was a crime.   Three federal judges have now concluded that it was illegal.  And yet not only do we do nothing about it, but we stand by as the Obama administration calls this criminal program a vital "state secret" and desperately tries to protect it and the lawbreakers from being subject to the rule of law.  This decision may make it more difficult for the Obama administration to hide behind sweeping secrecy claims in the future, but it won't negate the fact that we have decided that our leading political officials are completely free to commit crimes while in power and to do so with total impunity.

One related note:  back when Judge Diggs Taylor ruled that the Bush NSA program was unconstitutional and otherwise illegal, law professors Orin Kerr and Ann Althouse (the former a sometimes-Bush-apologist and the latter a constant one) viciously disparaged her and her ruling by claiming that she failed to give sufficient attention to the Government's arguments as to why the program was legal.  Althouse was even allowed to launch that attack in an Op-Ed in The New York Times.  But as I documented at the time, the argument made by these right-wing law professors to attack Judge Taylor was grounded in total ignorance:  the reason the court there didn't pay much attention to the legal justifications for the NSA program was because the Bush DOJ -- just like the Obama DOJ here -- refused to offer any such justifications, insisting instead that the court had no right even to consider the case.

That's why I find it darkly amusing that, today, the same Orin Kerr is solemnly lecturing The New York Times that Judge Walker here did not consider the merits of the claims about the program's legality because the Obama DOJ argued instead "that Judge Walker couldn't reach the merits of the case because of the state secrets privilege."  Kerr is wrong when he says that this ruling does not constitute a decision that the Bush NSA program was illegal -- it does exactly that, because the plaintiffs offered evidence and arguments to prove it was illegal and the Obama DOJ (like the Bush DOJ before it) failed to offer anything to the contrary -- but he 's right that Judge Walker did not focus on the merits of the defenses to the NSA program because the Obama DOJ (like the Bush DOJ) refused to raise any such defenses.  But exactly the same thing was true for Judge Taylor when she ruled three years ago that the NSA program was illegal, which is why the right-wing attacks on her judicial abilities back then (led by Kerr and Althouse) were so frivolous and misinformed.

UPDATE:  Dan Froomkin echoes, and elaborates on, several of the points here, in his Huffington Post piece entitled:  "Ruling Against Bush Wiretaps Also Slaps Down Obama's Executive Overreach."  He writes:  "the ruling should serve as a wake-up call to those who thought that the days of executive overreach were behind us."

And Charlie Savage and Jim Risen have a new NYT article which, in the course of discussing whether the Obama DOJ will appeal this decision, examine the likely motives and goals of the Obama administration here, none of which reflect well on them at all.