In Arkansas, the Democratic Senate primary could test the wisdom of sticking with conservative incumbents 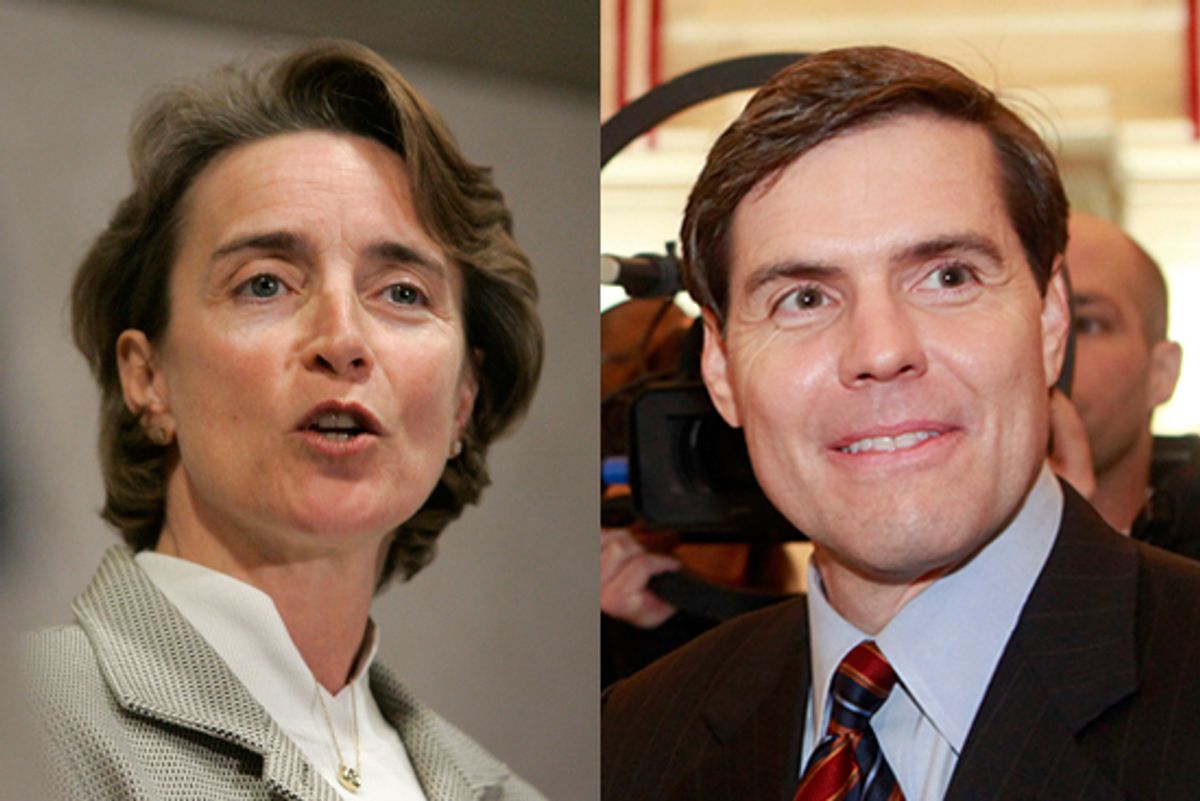 Bill Halter and his campaign advisors in Arkansas wouldn't put it quite this bluntly. But the basic theory that propelled him into the race for the Democratic nomination for the state's Senate seat is pretty simple: If the incumbent, Blanche Lincoln, is going to lose in November anyway, why not let someone else have a shot?

Of course, Halter, who's now the Arkansas lieutenant governor, says he's running to help turn around the economy and create jobs, and to speak for the people, not for the special interests in Washington. And Lincoln, naturally, isn't exactly throwing in the towel. But it's not hard to see why Halter thought he had a chance in the first place. For months, the polls back home have brought Lincoln nothing but bad news; only a few incumbents have ever dug themselves out of holes like the one she's in. In the month since Halter finally got into the race, the trouble has kept mounting for Lincoln. A survey out Thursday showed him doing slightly better than the incumbent against possible Republican nominees. The same day, Halter's campaign announced he raised about $2 million this quarter -- even though he's only been running since March 1. Lincoln, working for the full three months, raised about half that.

"As I looked at it -- and I think this is clear from the public polling -- the incumbent was and is going to have a very hard time getting reelected," Halter says. "People from all parts of Arkansas were literally calling up or stopping me on the street, and saying, 'Look, we want you to do this, and we're with you.'"

And if Halter's campaign is easy to explain, the theory that has labor unions in Arkansas and progressive activists around the country jumping to help him out is even simpler. For years, conservative Democrats have justified splitting with the party faithful as a matter of survival; it's better to have a Democrat in office than a Republican, the argument went, even if the Democrat sometimes votes with the GOP. So on issues like healthcare reform, or cracking down on Wall Street, conservative Democrats got a free pass. Lincoln, though, comes into this year's election looking so weak that progressives basically figured they didn't have to buy that line anymore. Instead of trying to help her hold on to her seat, they could try to push her out of the way a little early. Because if conservative Democrats can't win anyway, why stick with them? Halter, in some ways, is merely a vehicle for progressives to take out their anger on Lincoln.

"She's in trouble," says Alan Hughes, the president of the Arkansas AFL-CIO, which endorsed Halter almost as soon as he entered the race. "She would be an easier target in November than Bill Halter would be. Blanche -- she's got a voting record that really does not come across good at all."

Over the next six weeks, the primary could wind up becoming a test of the wisdom of the Washington Democratic establishment's loyalty to its incumbents. The White House and the Senate Democratic Campaign Committee are both solidly behind Lincoln; they back whomever already has the job over any challenger, as the Joe Lieberman-Ned Lamont race in Connecticut showed in 2006. Meanwhile, grass-roots activists are hoping a Halter win would demonstrate the folly of that approach. Unions and MoveOn.org have pledged to spend $5 million on Halter's behalf, which would effectively erase any financial edge Lincoln has.

"The system of carrots and sticks is pretty messed up in Washington, D.C.," says Adam Green, the co-founder of the Progressive Change Campaign Committee, which raised, either on its own or with allied groups, about $110,000 of the $400,000 Halter raked in through ActBlue last month. "Blanche Lincoln opposes what most Democrats and most of her own constituents want on issues like the public option and Wall Street accountability -- and that bad behavior goes rewarded by politicians who seem to not understand how to exert leverage at all. President Obama thinks that interpersonal relations with corporate sellouts like Blanche Lincoln is the key to winning their votes on bills in the future. But the truth is that putting these corporate Democrats on notice that they will face political consequences if they betray you is way more important."

As soon as he got into the race, Halter had one big built-in advantage: He's not in Washington already (though he did work in the Clinton administration, after which he served on several corporate boards, which Lincoln allies say could complicate his populist approach). Lincoln had frustrated liberals and conservatives alike by very publicly debating with herself over whether to vote for the healthcare reform bill in the Senate; she wound up supporting it, but opposing the budget reconciliation measure to make several changes to it, a complicated stance that may not have pleased anyone by the time it was all over.

"I'm one of the ones who have been disappointed with how far right Blanche has been over the years," says Larry Crane, the former chairman of the Pulaski County Democratic Party, who resigned a few weeks ago to run for county clerk. "I think that she probably is where she is for self-preservation, and I think for many of us, she has misjudged where we would like her to be."

But Lincoln's overall voting record isn't dramatically different from that of Sen. Mark Pryor, the state's other Democrat, and her allies say she's stood with the party on most key votes. Unlike certain other targets of primary campaigns. "She's not Joe Lieberman," says one Washington Democratic strategist, who asked for anonymity to discuss the race more openly. "And by the way, she's from a much redder and more socially conservative state than Joe Lieberman." (On the other hand, even Lieberman wound up voting for the healthcare budget reconciliation bill.)

All that has made for a lively first month on the campaign trail. Lincoln is trying to cast Halter's support from labor unions as the pernicious influence of outside interests trying to tell Arkansans how to vote. Her second TV ad of the race shows a clip of a commercial paid for by the AFL-CIO that says, "She's working for them, not us." "So who's the 'us' that I'm not working for?" Lincoln says in her reply. "That ad was paid for by a bunch of Washington, D.C., unions. And they're right -- I'm not working for them."

Of course, that only irritated labor more. The main reason? The $582,495 unions have given her in campaign contributions over the course of her time in Washington.

More broadly, Lincoln's approach is a combination of floating above the partisan fray and reminding Arkansans that she's the first one of them to chair the Senate Agriculture Committee. She's essentially running an insider's version of an outsider's campaign. She touts her votes against an auto bailout, against giving more money to Wall Street, against a cap-and-trade climate change bill, and, yes, against a public option in the healthcare reform bill. She seems to have avoided the pressure to shift left that you'd expect a primary opponent to put on her.

Halter, meanwhile, talks up his push for a referendum, which passed, to set up an Arkansas lottery and earmark the funds for college scholarships for the state's students. And he rarely misses a chance to point out that Lincoln may have voted against extending more aid to Wall Street, but she did support the original Troubled Asset Relief Program. For Halter, that's all part of a broader populist message. "Unemployment is at a high rate," Halter says. "People are struggling, and then they wake up, and they see -- on the front page of a statewide newspaper -- headlines about Wall Street executives literally getting tens of billions of dollars in bonus payments? You can understand people's frustration."

In some ways, Halter may make an unlikely champion of the left; as Max Brantley, editor of the Arkansas Times, told Salon when Halter got into the race, the lottery isn't exactly the most progressive way to fund education. But the simple fact that he's not Lincoln -- and he has a chance to win -- will keep liberals engaged with the race anyway. Running as an incumbent Democrat in Arkansas in 2010 was never going to be easy for Lincoln. If Halter keeps building on the momentum he has so far, she won't have to worry about it much longer.