10 years after Anthony Bourdain's "Kitchen Confidential," the bad-boy chef is an endangered species 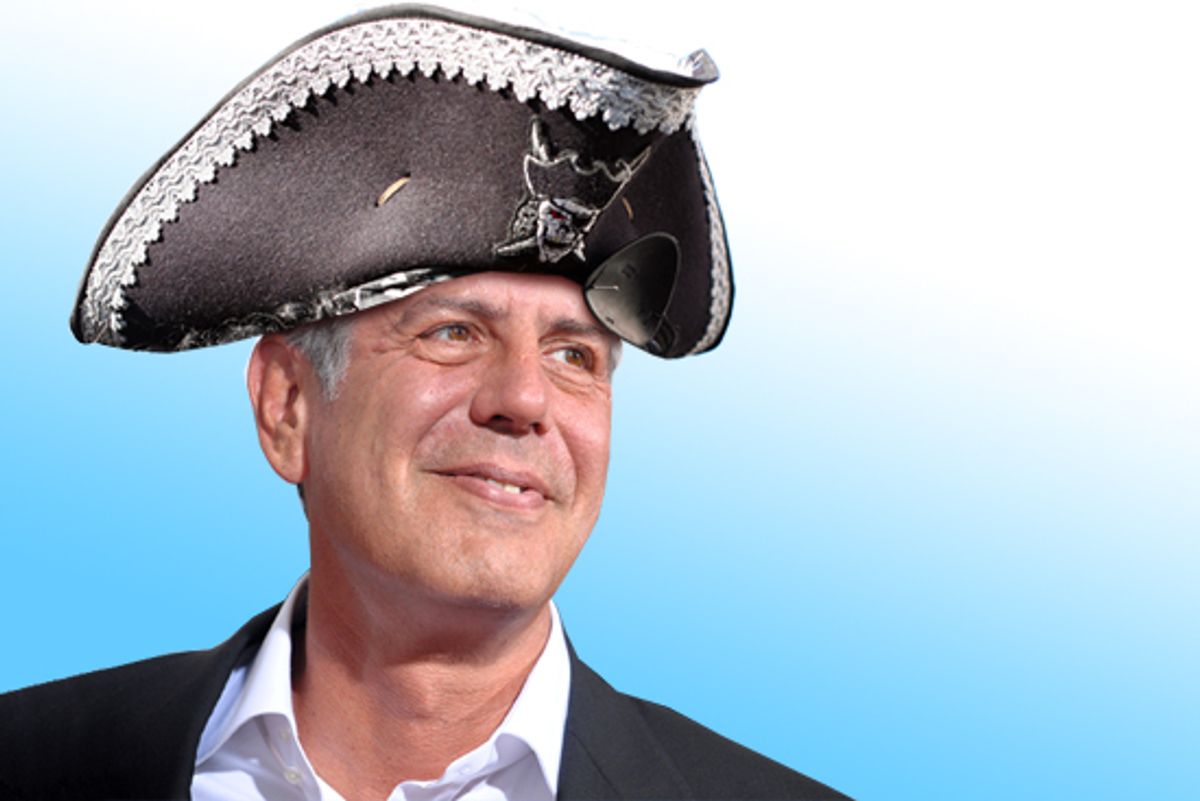 Ten years ago, Anthony Bourdain became a star when he released "Kitchen Confidential," his restaurant-as-pirate-ship memoir, and pretty much single-handedly defined our image of the "real life" of restaurant cooking: a manly adventure of hot-shit line cooks and sodomy, rum and lashes of cocaine. It's an intense world where the abuse comes from all angles, and, as in sports or war, is filled with heroic, violent mythmaking.

So when a chef in Canada got canned last week for speaking a little too frankly to a journalist about life in his kitchen, Tim Hayward speculated in the Guardian that the chef may have just been trying to join Bourdain's party: "By telling the gritty truth like 'chef' [Gordon] Ramsay does it, surely he should have expected admiration, kudos and unlimited girls ..." But for the chef's sake, I hope not. Because that ship has sailed -- a culture drowning, ironically, in the very waves of celebrity Bourdain helped to create.

When I got to culinary school, two years after the release of "Kitchen Confidential," my chef instructors were still fuming about it. "I worked my entire life in an industry that people looked down on," one spat out to my class. "I always worked harder than anyone, worked cleaner than anyone, because I didn't want anyone to look at me like I was some scumbag. I'm proud of my work. And this guy Bourdain comes along and makes himself famous by making us look like scumbags." I quietly scrubbed my pots, careful not to mention that I kinda really liked that book.

But chef's point was clear. While there have always been proud cooks and chefs, our culture had relegated them to the dirtiest classes of servility. But finally, as the Food Network and the burgeoning "foodie culture" were giving cuisine -- and a very small handful of chefs -- a pop-culture cachet in the '90s, cheffing became a valid profession, something respectable people could aspire to.

And along came "Kitchen Confidential," where you barely get beyond the title page and there's a chef rutting with a bride behind the restaurant at her rehearsal dinner. You can see why my instructor would feel this sends the wrong message.

But rather than set cheffing's white-collar respectability back, Bourdain did something even greater for chefs: He helped to turn the profession into something that people wanted to experience.

The success of "Kitchen Confidential" -- and that bad-boy narrative -- gave a complicating and necessary edge to the sweet, camera-ready smiles of the Emerils and Bobby Flays and, eventually, the Rachael Rays. Bourdain's work made chefs fuller, more complete characters. Accepting the insanity of Bourdain's kitchens as reality, we respected all the more the chefs who stepped out of them with crisp coats and grace: Rather than "expose" chefs, Bourdain ended up creating even more mystique. I mean, they could make magic; were our beautiful dinners really forged in hell? Instead of being simply entertained by their TV simulacra, we grew intrigued by the real thing. We wanted more access to their world, and not just in the dozens of books and movies that followed. We wanted a taste of the chef's life as we ate our dinner: We wanted to talk to the cooks who prepared it, we wanted to see it being made, and, vitally, we sought out restaurants with open, visible kitchens to connect with the back of the house.

Realizing that their careers were no longer built solely on the plate, chefs and restaurateurs got ready for their close-up. They got P.R. flacks, got media-savvy in case the angels of fame blew their horns, and, most important, they shaped up their ships. The guests may have come in the door because of their newfound love of restaurant and cook culture, but it turns out that no one wants to see dinner being made by a bunch of dudes snorting rails of coke. The more titillating tales from "Kitchen Confidential" were great stories -- and you need the threat of crashes to make auto racing exciting -- but when it came to their own dinner, guests came wanting to see fastidiousness, skill, intensity, but not wildness. Crashing is for somewhere else, not where my money goes. And so the old thrills of violence, abuse and misogyny found little room in restaurants of ambition. I once worked in an open kitchen restaurant when one of the sous chefs lost it, in classic fashion: winging pans and loudly discussing the aesthetic merits of various cooks' mothers. Every time I tell this story to chefs, their first reaction is, "And was he fired that night, or did the chef wait a day?" Turns out the preferred dinner music is rarely the rhythmic butt-slapping of waitresses.

Or of other cooks. As Gwen Hyman, a professor at Cooper Union and author of "The Taste of Fame: Chefs, Diners, Celebrity, Class," said to me, "Something else that's changed is that there are more women in the kitchen." As the profession gained more legitimacy, there were inevitably going to be more women attracted to it. Gwen continued, "There are enough of them now that they don't have to comport to the hypermasculine culture. And there are legal ramifications for sexual harassment, so that changes the culture too."

But what about the dude in Canada? The one fired precisely for his old-school Bourdainian kind of bad behavior? Well, this is what he said to the journalist to get him canned:

"Being in an open kitchen does have its perks. 'We play the "would you" game,' laughs [Bagshaw], who spends most of his 14-hour shifts rubbing elbows with his sous-chef Matt. 'You know, "would you sleep with her?" type of thing. We have our inside jokes, it makes you forget you’ve been working 14 hours.'"

Admitting to talking quietly about customers in this way is certainly not polite chitchat, but it's hardly a transgression on the level of Bourdain's bride-humping mentor. So there's a particular irony to Hayward's suggestion that this chef got himself fired for trying to make a public persona for himself. It's a testament to how public -- and legitimate -- chefs have become that his gaffe was a firable offense in the first place.