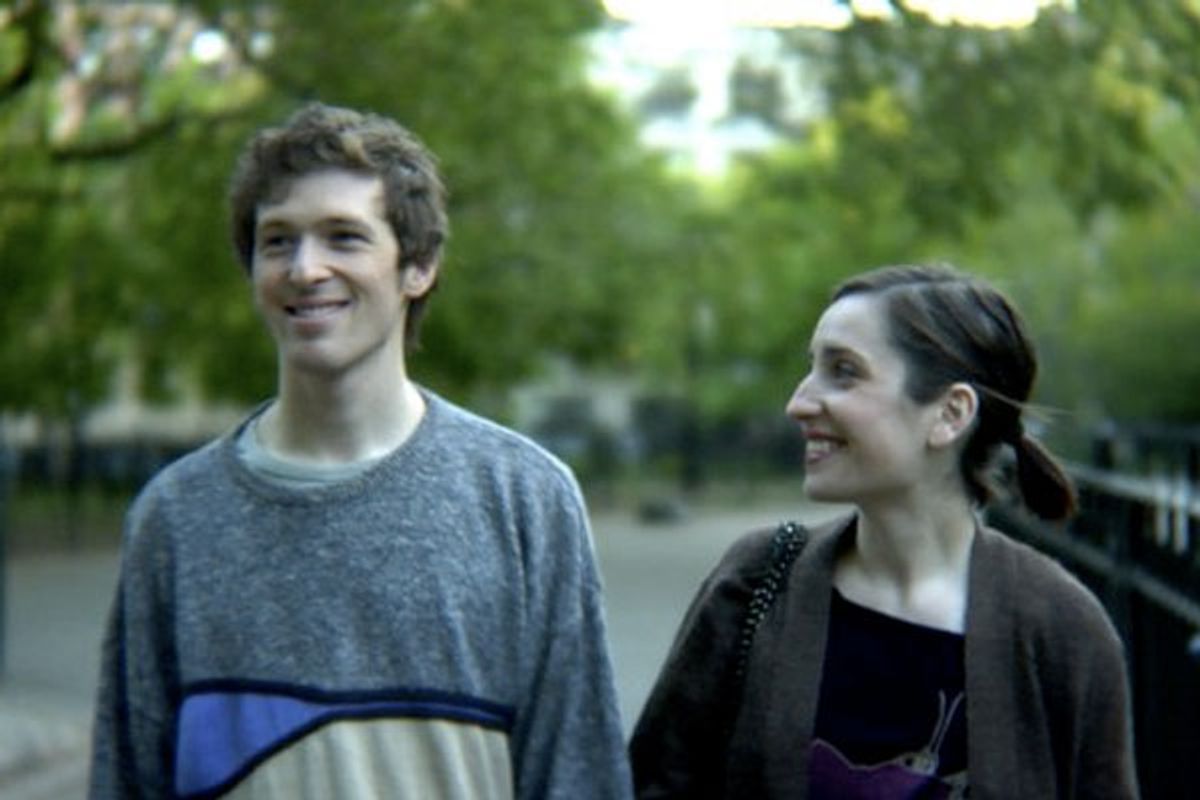 If there's a problem with making a movie about the world-weary disillusionment of young lovers, it goes way beyond the fact that the topic was an old one when Molière got to it 340 years ago. Every generation has the right and even the obligation to rediscover romance on its own terms, and to believe, for one brief and shining moment, that it has invented or experienced something new.

It's not the familiarity of the premise or the hubristic confidence of the central couple that makes Daryl Wein's likable but skittery breakup comedy "Breaking Upwards" such a mixed bag. Those are the good things about the movie. I'm not even complaining about the narcissism of the project, in which director Wein appears with his off-screen partner and co-writer, Zoe Lister-Jones, playing a couple named Daryl and Zoe. Four years in, they're bored with the sex and with each other: We see Daryl reading the New York Times on the can, with Zoe's thong-framed ass about four inches from his face (as she brushes her teeth). Rather than call it off cleanly, they plan their breakup as an extended, masochistic, obsessive-compulsive enterprise, taking three "days off" a week to create lots of time and space for comic misunderstandings and mutual heartbreak.

Sure, Daryl and Zoe playing Daryl and Zoe -- and reputedly acting out their real-life relationship dramas -- is kind of cloying, but they make a cute screwball couple, with some interesting gender-blur going on. Wein is a tall, pretty will-o'-the-wisp, somewhat feminine in manner, while Lister-Jones is short, hot-tempered and loud, decidedly the more masculine of the two. In one particularly amusing scene, Daryl's boundary-less mother (a skin-crawling performance by Julie White) accuses him at length of wearing "girl-pants."

That whole meta-biographical aspect doesn't bug me much because everybody who's ever written or directed a romantic comedy is drawing on their own emotional experience; this one's just a little more obvious about it. "Breaking Upwards" gets into trouble through its creators' apparent belief that there's something distinctively contemporary about it -- some indefinable edge of indie-ish, hipsterish, iPhone-era sexual daring -- when what Wein has really made is a movie so thoroughly steeped in middle-class, New York Jewish conventionality that it often feels like outtakes from an abandoned Woody Allen film about Today's Youth.

I know that's pretty mean, and it's not like I didn't enjoy the film, or at least bits of it. Lister-Jones is a fiery, funny actress, a pint-size comedienne capable of surprising sultriness. (She's getting Hollywood and TV roles, and it's no wonder.) Wein has cast the supporting characters well, including a scene-stealing performance from "Saturday Night Live" alum Andrea Martin as Zoe's pot-smoking mom. But "Breaking Upwards" is a movie of fragmentary gags and sketches: a dog who shits on Zoe's Chanel bag and disappears, a teeny-tiny detour into polyamory, the hunky goyische actor (Pablo Schreiber) who moves in on Zoe, the synagogue bombshell (indie it-girl Olivia Thirlby) who circles Daryl. While Alex Bergman's photography is often impressive, Wein's editing has the short attention span of a Hollywood movie, without the accompanying cocaine rush.

Even if these people don't live in the capacious, imaginary Upper East Side apartments of Allen's "Annie Hall"/"Hannah" heyday -- they live downtown or even, shockingly, in Brooklyn -- they still inhabit a low-impact, low-stress fantasy of post-collegiate Manhattan that's adjacent to Woodyworld. To accuse Daryl and Zoe of being "hipsters" would strip the term of any vestiges of meaning it may once have possessed; these are clean-cut, upwardly mobile young 'uns who go home for a hot dinner once a week and whose parents pay their health insurance. Their delayed-breakup plan doesn't stem from some desire to defy society or establish a new sexual paradigm. Like young lovers since forever, they're too scared to commit and too scared to let go. If Woody actually had made this, at least he'd see that part of the story clearly.

"Breaking Upwards" is now playing at the IFC Center in New York. It opens April 9 in Los Angeles and April 16 in San Francisco, with more cities to follow. It is also available on-demand via IFC In Theaters, on many cable-TV systems.