This week in crazy: The pope

As a sex abuse scandal continues to threaten the Catholic Church, the pontiff just keeps digging his own grave 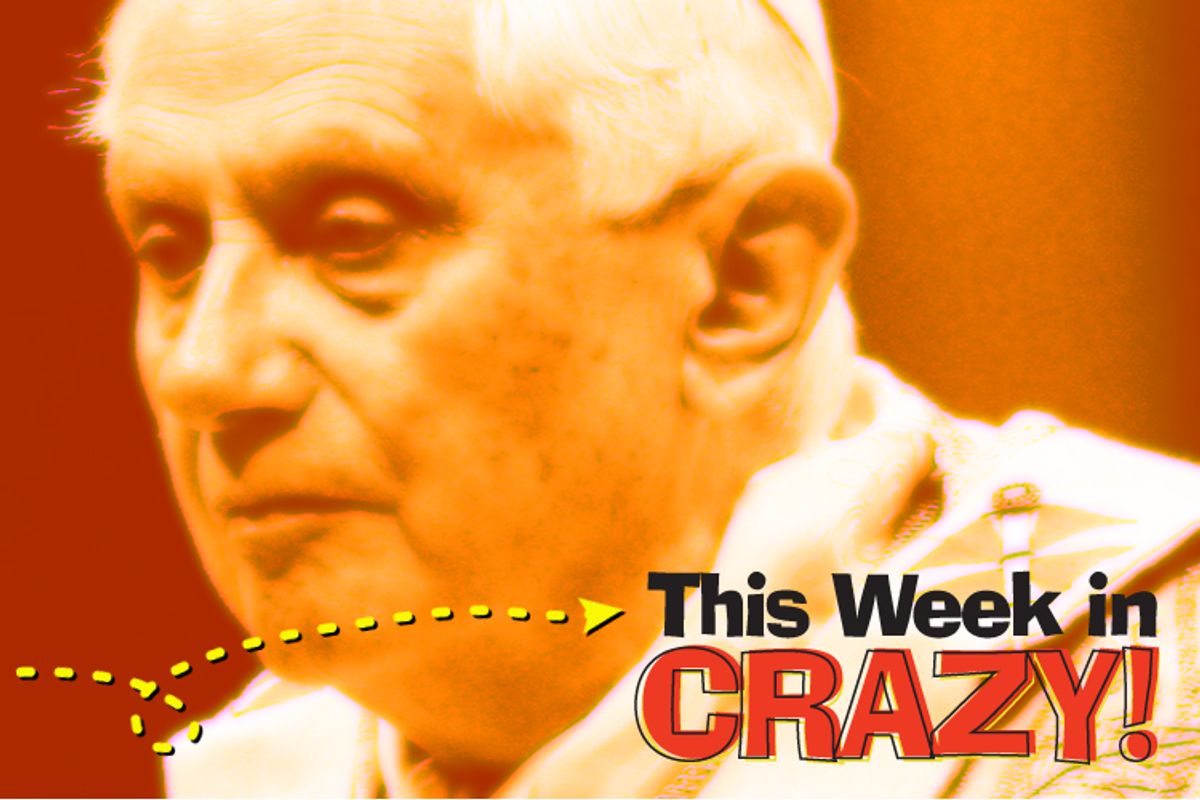 It's been a rough couple weeks for the man who wears the pointy hat.

He's been slapped with a lawsuit. He's been excoriated by Sinéad O'Connor. And in a (pardon the phrase) utterly damning series of New York Times stories, he's been implicated in one of the worst sex abuse coverups in the Catholic Church's not-too-shabby history of sex abuse scandals.

To cut the guy some slack, Pope Benedict XVI has done a hell of a lot of apologizing lately, talking tough on the "heinous crimes" committed by the members of profession. And before we storm the Vatican with pitchforks and torches, we'll note that according to the National Catholic Register, no documents have yet emerged directly linking the artist formerly known as Joseph Ratzinger to the mismanagement of any sex abuse cases. In fact, under his watch in the Congregation for the Doctrine of the Faith, he pushed for an unprecedented level of reform and investigation.

But being the front-line guy for an organization that's harbored a truly outstanding number of child rapists can take a toll on a person. And so, as Catholics around the world began the Holy Week sprint toward Easter, the 82-year-old pontiff was sounding a tad defensive. In his Palm Sunday sermon, he took a moment to speak about "the courage of not allowing oneself to be intimidated by the petty gossip of dominant opinion." Hey, pope, not to tell you how to do your job or anything, but really, when your business is looking at thousands of sex crimes -- not a good moment to trot out the word "gossip."

Thing got more heated as the week wore on, when the Vatican's Cardinal William J. Levada issued a testy official statement dissing the Times for its "attack mode" saying that "in rushing to a guilty verdict, [the Times] lacks fairness in its coverage of Pope Benedict."

Then, during a Good Friday service conducted by the pope's official preacher, the Rev. Raniero Cantalamessa, the pontiff sat quietly while the priest quoted a letter he said came from a Jewish friend. "I am following the violent and concentric attacks against the church, the pope and all the faithful by the whole word," he said. "The use of stereotypes, the passing from personal responsibility and guilt to a collective guilt, remind me of the more shameful aspects of anti-Semitism."

That's right — comparing the outrage over real crimes and coverups to anti-Semitism. And this from the people who gave you the Crusades! Also, I'm sorry, Cantalamessa, but if we're talking about "passing from personal responsibility," didn't your own boss Benedict recently swat some of the blame for the epidemic of pedophilia in Ireland by laying it on "the rapid transformation and secularization of Irish society"?

It's not like Benedict can jump up from his big, ornate throne every time one of his minions goes rogue. On second thought, actually he can — he's the freakin' pope. Instead, in what looks like a move straight out of American politics, he appears to have decided he's said his share of sorries, and now he's letting his underlings lash out against critics. One can't shake the feeling that the church would like this all to go away now. But when you're one of the most powerful leaders in the world and you're rocked with a cataclysmic scandal, you have to suck it up. And even if your whole organization wears long dresses, the craziest thing a leader can do is hide behind his employees' robes.