Perception vs. reality: The White House bets that defending a weak bill will make it look strong 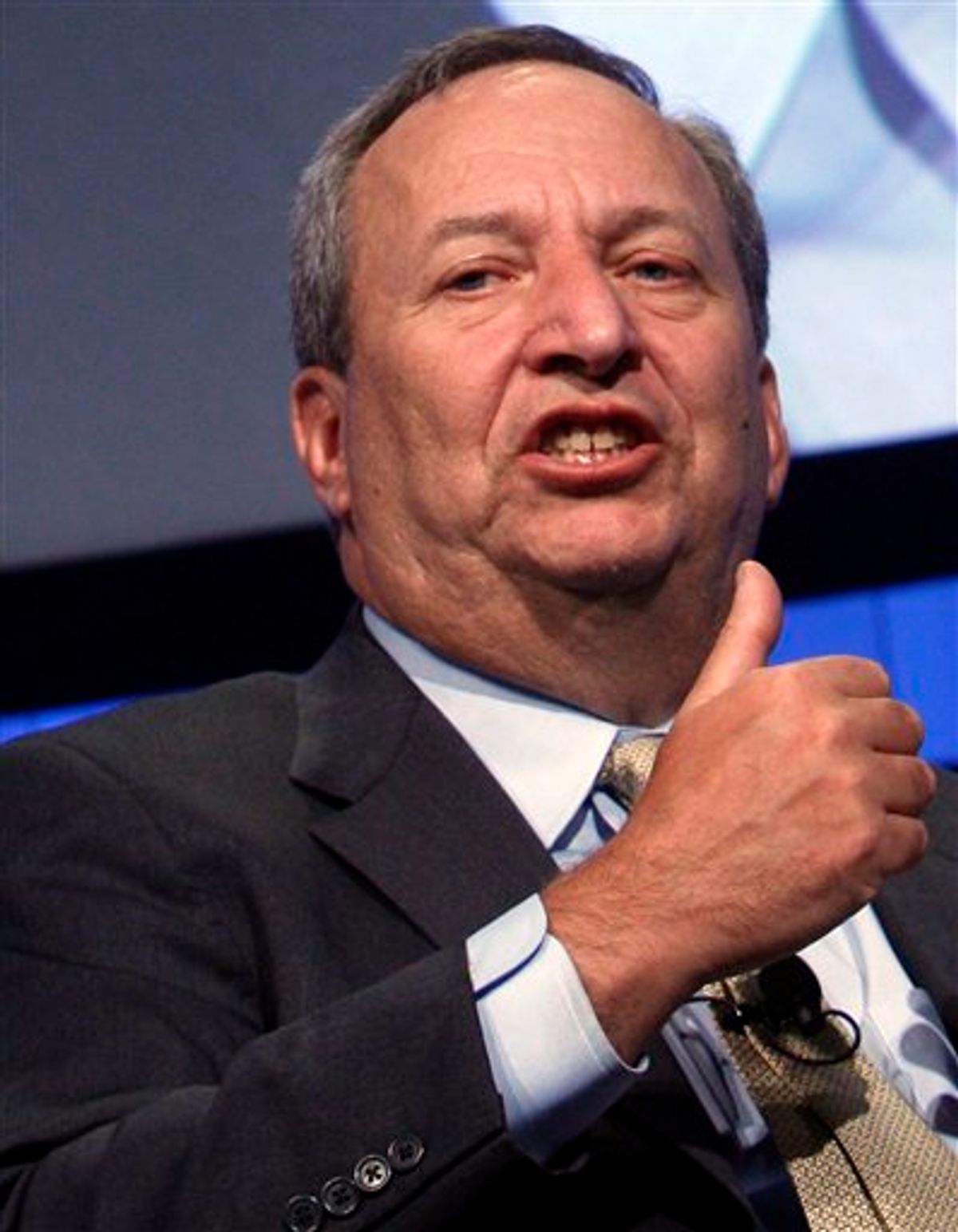 Larry Summers, Director of the National Economic Council, Executive Office of the President, USA, speaks during a session 'The US Economic Outlook' at the World Economic Forum in Davos, Switzerland on Friday Jan. 29, 2010. Climate change moves to the forefront at the World Economic Forum with the question of what steps world governments, big business and activists can take together to find a path that is both effective environmentally but won't break the bank. (AP Photo/Virginia Mayo) (AP)
--

"The cheapest stimulus of all is increased confidence," says Larry Summers, in an interview with the Financial Times' Martin Wolf, conducted on April 1. The director of Obama's National Economic Council then proceeded to explain how healthcare reform, the right energy and education policy, and banking reform were all effectively Keynesian tools for boosting American "animal spirits" -- for imbibing us with hope, rather than despair.

... I think the sense that the country's long term problems ... are being addressed ... should increase a generalized sense of confidence and that too will be a source of stimulus to the economy.

Summers inadvertently raises an important point here -- the public's perception of how the administration is addressing the nation's problems may be more important to the White House than whether or not those problems will actually be solved. If people believe the administration is effective, they'll be more willing to take risks, spend money, hire employees, etc.

Take, for example, the case of bank reform, the subject of much chatter in the financial press and econoblogosphere of late, as we wait for Congress to return from its spring break and engage fully in the next legislative battle royale. There are, by and large, three competing narratives aiming to shape popular perceptions of the reform struggle. There is the narrative, articulated most vociferously by Simon Johnson, with strong backup from Paul Krugman (see his column today), that deems the current package of reforms endorsed by the administration pathetically inadequate at confronting the fundamental causes of the financial crisis.

Then there is the hardcore conservative narrative, flailing about as it tries to defend its deregulatory ideology, and represented in its most blatant arrogance by a comment made a few days ago by a bank president, passed along by Johnson's partner-in-reform-blogging, James Kwak, to the effect that "those who are behind this legislation are absolutely ill-informed and under-educated."

And then there's the administration's version of reality, which starts from the premise that the bill is tough, and the real battle is to defend it from Republicans who want to gut it. Noam Scheiber has a good snapshot of this worldview in the New Republic. As Scheiber games it out, the GOP is ready to give ground on the Consumer Financial Protection Agency as cover for doing the banking industry's bidding on derivatives regulation and other issues that are less easily explained to the general public.

In this clash of narratives, the key thing to realize is that while the bill can unquestionably be made stronger or weaker, the Obama administration's primary goal is to be perceived as defending reform against the predations of Wall Street and obstructionist Republicans. It appears to be more important to win the war against those who would sabotage the bill than those who would bolster it.

Scheiber argues that in the wake of the successful passage of healthcare reform, the White House now has the leverage necessary to stand tough against Republican opponents -- but only in the sense of defending what is already in the Dodd bill. Scheiber reports that the administration is convinced it can peel off a couple of senators to break a filibuster. But that calculus would probably change if Obama started pushing to make the Dodd bill even stronger right now, along the lines suggested by Johnson and Krugman.

Which creates a paradox. In the struggle to get a banking reform bill passed, the administration appears to think it must defend a weak bill in order to be perceived as strong. The longer you ponder that sentence the less confidence-boosting the whole charade becomes.