Iraq slaughter not an aberration 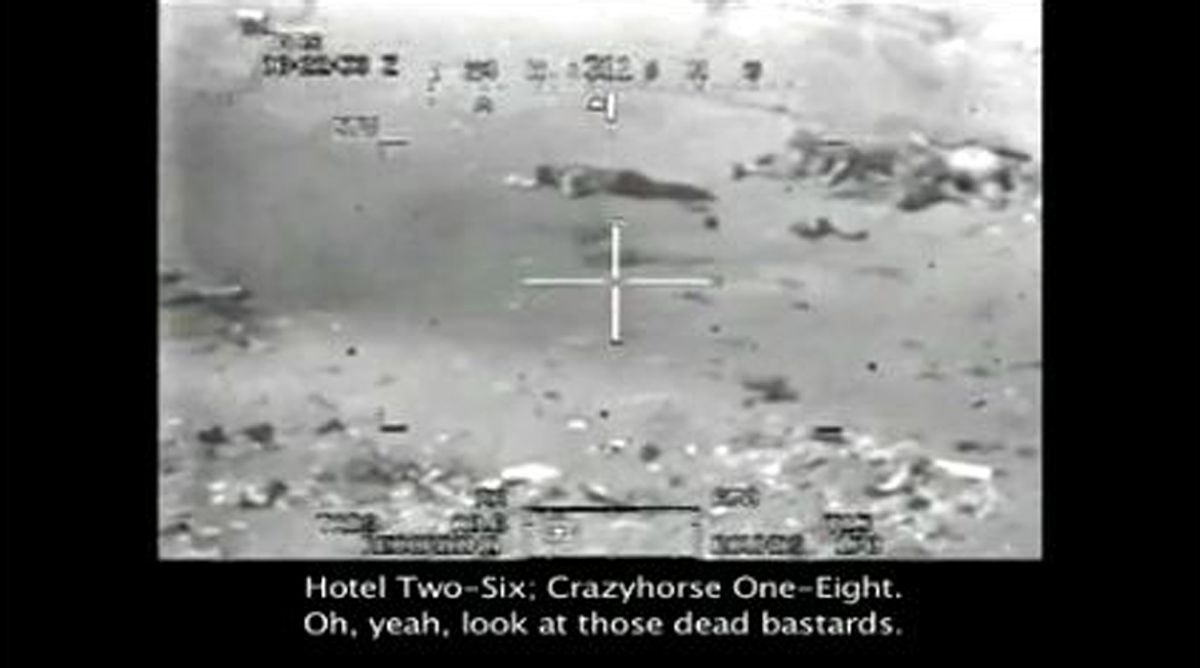 Previously classified footage of a July 2007 attack by U.S. Apache helicopters that killed a Reuters journalist and several other non-insurgents, published on WikiLeaks.
--

I was just on Democracy Now along with WikiLeaks' Julian Assange discussing the Iraq video they released yesterday, and there's one vital point I want to emphasize.  Shining light on what our government and military do is so critical precisely because it forces people to see what is really being done and prevents myth and propaganda from distorting those realities.  That's why the administration fights so hard to keep torture photos suppressed, why the military fought so hard here to keep this video concealed (and why they did the same with regard to the Afghan massacre), and why whistle-blowers, real journalists, and sites like WikiLeaks are the declared enemy of the government.  The discussions many people are having today -- about the brutal reality of what the U.S. does when it engages in war, invasions and occupation -- is exactly the discussion which they most want to avoid.

But there's a serious danger when incidents like this Iraq slaughter are exposed in a piecemeal and unusual fashion:  namely, the tendency to talk about it as though it is an aberration.  It isn't.  It's the opposite:  it's par for the course, standard operating procedure, what we do in wars, invasions, and occupation.  The only thing that's rare about the Apache helicopter killings is that we know about it and are seeing what happened on video.  And we're seeing it on video not because it's rare, but because it just so happened (a) to result in the deaths of two Reuters employees, and thus received more attention than the thousands of other similar incidents where nameless Iraqi civilians are killed, and (b) to end up in the hands of WikiLeaks, which then published it.  But what is shown is completely common.  That includes not only the initial killing of a group of men, the vast majority of whom are clearly unarmed, but also the plainly unjustified killing of a group of unarmed men (with their children) carrying away an unarmed, seriously wounded man to safety -- as though there's something nefarious about human beings in an urban area trying to take an unarmed, wounded photographer to a hospital.

A major reason there are hundreds of thousands of dead innocent civilians in Iraq, and thousands more in Afghanistan, is because this is what we do.  This is why so many of those civilians are dead.  What one sees on that video is how we conduct our wars.  That's why it's repulsive to watch people -- including some "liberals" -- attack WikiLeaks for slandering The Troops, or complain that objections to these actions unfairly disparage the military because "our guys are the good guys" and they act differently "99.99999999% of the time."  That is blatantly false.  Just as was true of the deceitful attempt to depict the Abu Ghraib abusers as rogue "bad apples" once their conduct was exposed with photographs (when the reality was they were acting in complete consistency with authorized government policy), the claim that what was shown on that video is some sort of outrageous departure from U.S. policy is demonstrably false.  In a perverse way, the typical morally depraved neocons who are justifying these killings are actually being more honest than those trying to pretend this is some sort of rare and unusual event:  those who support having the U.S. invade and wage war on other countries are endorsing precisely this behavior.

As the video demonstrates, the soldiers in the Apache did not take a single step -- including killing those unarmed men who tried to rescue the wounded -- without first receiving formal permission from their superiors.  Beyond that, the Pentagon yesterday -- once the video was released -- suddenly embraced the wisdom of transparency by posting online the reports of the so-called "investigations" it undertook into this incident (as a result of pressure from Reuters).   Those formal investigations not only found that every action taken by those soldiers was completely justified -- including the firing on the unarmed civilian rescuers -- but also found that there's no need for any remedial steps to be taken to prevent future re-occurence.  What we see on that video is what the U.S. does on a constant and regular basis in these countries, and it's what we've been doing for years.  It's obviously consistent with our policies and practices for how we fight in these countries, which is exactly what those investigative reports concluded.

The WikiLeaks video is not an indictment of the individual soldiers involved -- at least not primarily.  Of course those who aren't accustomed to such sentiments are shocked by the callous and sadistic satisfaction those soldiers seem to take in slaughtering those whom they perceive as The Enemy (even when unarmed and crawling on the ground with mortal wounds), but this is what they're taught and trained and told to do.  If you take even well-intentioned, young soldiers and stick them in the middle of a dangerous war zone for years and train them to think and act this way, this will inevitably be the result.  The video is an indictment of the U.S. government and the war policies it pursues.

All of this is usually kept from us.  Unlike those in the Muslim world, who are shown these realities quite frequently by their free press, we don't usually see what is done by us.  We stay blissfully insulated from it, so that in those rare instances when we're graphically exposed to it, we can tell ourselves that it's all very unusual and rare.  That's how we collectively dismissed the Abu Ghraib photos, and it's why the Obama administration took such extraordinary steps to suppress all the rest of the torture photos:  because further disclosure would have revealed that behavior to be standard and common, not at all unusual or extraordinary.

Precisely the same dynamic applies to the Pentagon's admission yesterday that its original claims about the brutal February killing of five civilians in Eastern Afghanistan were totally false.   What happened there -- the slaughter of unthreatening civilians, official lies told about the incident, the dissemination of those lies by an uncritical U.S. media -- is what happens constantly (the same deceitful cover-up behavior took place with the Iraq video).  The lies about the Afghan killings were exposed in this instance not because they're rare, but because one very intrepid, relentless reporter happened to be able to travel to the remote province and speak to witnesses and investigate the event, forcing the Pentagon to acknowledge the truth.

The value of the Wikileaks/Iraq video and the Afghanistan revelation is not that they exposed unusually horrific events.  The value is in realizing that these event are anything but unusual.

Here's the Democracy Now segment I did this morning with Assange.  The bulk of the discussion, appropriately, is devoted to hearing from him about the videotape, and it's very worth watching; my participation begins at roughly 35:30 (the transcript is here):

I can't pretend to know the full truth or circumstances of this. But at face value it is the most damaging documentation of abuse since the Abu Ghraib prison-torture photos. As you watch, imagine the reaction in the US if the people on the ground had been Americans and the people on the machine guns had been Iraqi, Russian, Chinese, or any other nationality. As with Abu Ghraib, and again assuming this is what it seems to be, the temptation will be to blame the operations-level people who were, in this case, chuckling as they mowed people down. That's not where the real responsibility lies.

Precisely.  In less than 24 the 36 hours since the video was first posted online, 1.3 2.5 million people have viewed it just on YouTube alone; millions more have undoubtedly viewed it on various television outlets and other venues.

And, of course, imagining what Fallows asks us to imagine -- that this was all being done to us, rather than by us -- is exactly the exercise which is most steadfastly avoided.  Besides, even if it were to be engaged, it would be dismissed as an exercise in "moral relativism."  When we do X, it is right; when others do X to us, it is wrong.  That's the benefit of being so Exceptional.

UPDATE II: Here's a one-and-a-half minute video update on the two children who were severely wounded when the Apache helicopter fired on the rescue van.  It was their father who was killed when he was attempting to rescue the wounded photographer from the initial attack:

And here is the angry statement of Nabil Nour El Deen, the brother of the 22-year-old Reuters photographer killed in the shooting, after he viewed the video.  Imagine how frequently we create this type of fury in the people we are "liberating":

UPDATE III:  The Washington Post's David Finkel covered the "surge " in Iraq when this incident occurred, and also wrote a book that, among other things, examined this Apache attack.  In his online chat today, he was asked whether he agreed with the point I made here, and said:  "Well, I don't want to agree or disagree with Glenn Greenwald, but I think it's fair to say that there have been many many bad days for Iraqis and Americans, and this was one of them."  He was then asked whether this was a common or exceptional occurrence, and he replied:  "The answer is both. . . . This was an extreme version of what went on constantly during this period. It was one bad day in a surge that was filled with such days."

Indeed, all anyone has to do is look at the enormous death toll of Iraqi civilians to know that events like this were anything but rare.

UPDATE IV:  An active duty U.S. soldier currently deployed in Southeastern Baghdad, where this incident occurred, writes a very thoughtful and nuanced analysis of this matter to Andrew Sullivan, and says:

90% of what occurs in that video has been commonplace in Iraq for the last 7 years, and the 10% that differs is entirely based on the fact that two of the gentlemen killed were journalists.

War is a disgusting, horrible thing. As cliche as that excuse has become, for people to look at the natural heartbreaking nature of it and say that they're somehow anomalous just shows how far people who have not experienced war have to go to understanding it.

Precisely.  This incident is commonplace, not unusual, because it's what war is and it's what has been happening in our wars throughout the decade.  We just don't usually see it, and this time we did.  That -- and the fact that Reuters journalists were killed and it thus generated more pressure than normal -- are the only things that make it unusual.

UPDATE V:  John Cole has some important insights into how we deceive ourselves into believing that events like this are rare.  As he notes, that is one major factor accounting for the huge gap in perception between Americans and the Muslim world:  they know such incidents are anything but rare, because they live in the midst of them.  Of course, the American media plays a vital role in maintaining our collective delusion, as nicely illustrated by this.

UPDATE VI:  For more on how common such incidents are, see here.