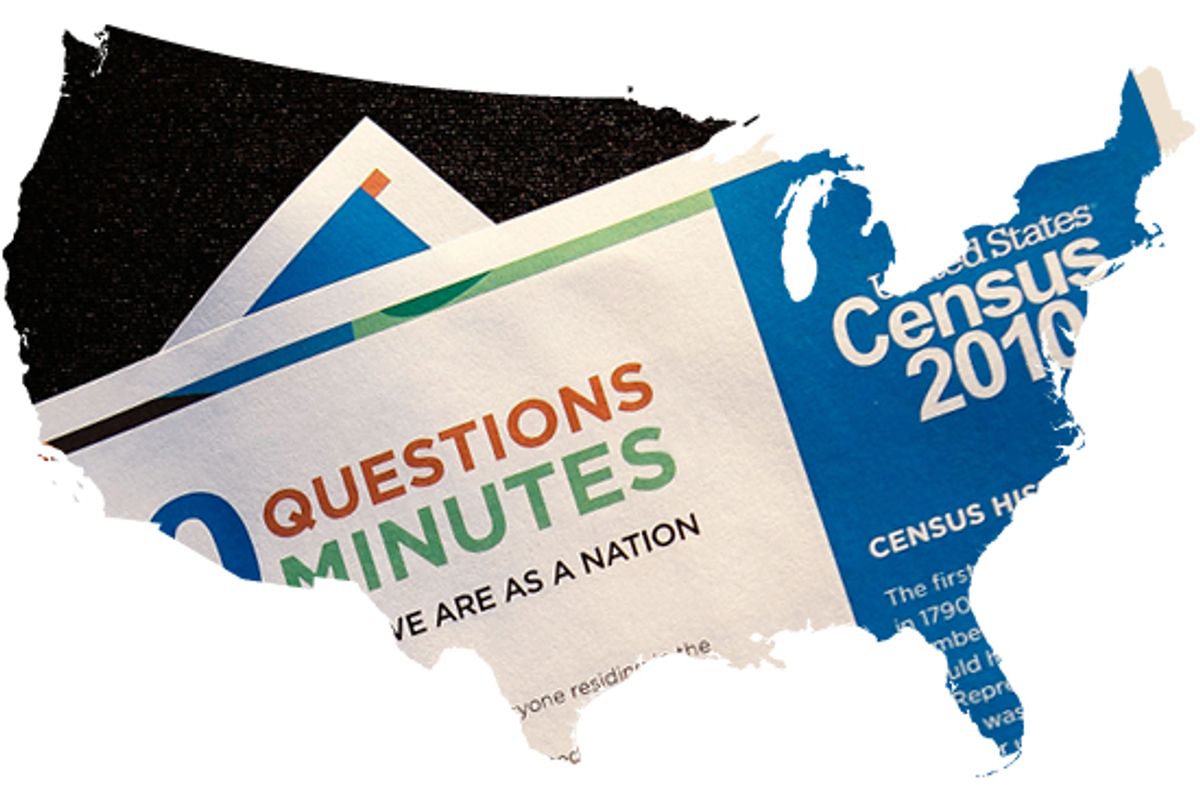 The e-mail that went out from New Mexico Gov. Bill Richardson a few weeks ago was specifically designed to stir panic among the Democratic faithful. "With a historic 37 governorships up for election in 2010, the GOP has crafted a scheme to win statehouses and put a Scott Brown in each of these states to gerrymander their party back into power," it read. "You see, governors have the power to influence the redrawing of congressional and state legislative districts. And the Republican Party has a blueprint to manipulate this process to their electoral advantage, courtesy of Tom DeLay and Karl Rove."

Tom DeLay! Karl Rove! The boogeymen of the last 10 years were back, front and center and still up to no good. Fortunately, recipients could banish them again very easily. "We can't let them get away with it," Richardson continued. "Please contribute $25 or more to the [Democratic Governors Association] today -- and help us turn back the 'Republican Comeback.'"

As Census forms hit mailboxes around the country this month, solicitations like that one are also on the rise. Republicans and Democrats are using the Census, and the once-a-decade chance to redraw the boundaries of House districts that it produces, to corral people who wouldn't ordinarily care much about what goes on in a statehouse far from their own state to give money to help down-ballot races. Spending on state races this year by national party committees run out of Washington could soar past $100 million, setting new records.

The theory is that whoever controls the statehouse controls the map in redistricting. In a handful of states expected to gain or lose House seats once the Census is done, control of the statehouse could tip one way or the other pretty easily this fall. Republicans have historically done a better job of focusing on how the district maps are drawn. This time, both parties have put big names on their efforts -- one-time Republican National Committee chairman Ed Gillespie and former House campaign committee chairman Tom Reynolds for the GOP, which has given its program the intimidating-sounding name REDMAP. (It stands for Redistricting Majority Project.) Ex-Hillary Clinton confidant Harold Ickes is doing similar work for the Democrats.

But for now, most of the attention from political operatives in Washington on the Census seems to be drawn by the money. Redistricting fights in 2011 provide for good fundraising pitches in 2010. And the committees are, to some extent, just using the Census as yet another talking point to suck in cash. If you listened to Richardson and gave the DGA $25, for instance, there would be no guarantee it would wind up being spent in a state where the Census results are likely to change the makeup of the House for the next decade; the DGA doesn't earmark its funds for any particular race. Same thing for a special fund run by the Democratic Legislative Campaign Committee, which hopes to raise $20 million to help elect Democrats to state House and Senate seats; officials haven't decided which races to target yet. Which means the Census could change the makeup of legislatures around the country and the House for the next 10 years. But the main reason people in Washington are suddenly talking so much about it is that it's also opening a lot of checkbooks now.

"People who have a history of giving to the DGA ... they get it," Ickes told Salon. Most of his work for the group is focusing on big donors. "But the people who don't have a history, they're sort of, 'Why are you talking to me about governors? I deal with senators and presidents and members of the House.'" When Ickes mentions Gillespie and Republican Governors Association chairman Haley Barbour, and starts talking about the prospect of new GOP districts all over the country, though, they come around quickly.

The reason redistricting is proving to be such an irresistible cash cow is that the committees talking about it now -- on both sides of the aisle -- are organized as so-called 527s, regulated by the IRS instead of federal election authorities. They can raise as much money as they want, and depending on state laws, turn it over in big chunks to gubernatorial or state legislative campaigns.

How much impact all that money has on the ostensible purpose of giving it -- drawing the maps of House seats from 2012 through 2020 -- isn't entirely clear. In a state like Texas -- projected to gain four House seats next year -- control of the redistricting process could come down to a handful of local races. The GOP runs the state House by a 77-73 margin; if Democrats can flip a couple seats, they'd be in a position to keep the House from approving any redistricting plan, which could mean the courts -- not the politicians -- draw up the maps. And since Texas was the site of the Republicans' greatest map-making victory after the 2000 Census, that would be enough for Democrats to call it a win. (Some Texas lawmakers fled the state in 2003 to try to keep the redistricting plan from going through, but that ultimately failed, and a lot of Republicans ended up representing Texas in the House.)

"A court-drawn plan in Texas is going to be far better for Democrats than the one they've got now or the Republican-drawn plan," says Tim Storey, who tracks redistricting and the Census for the nonpartisan National Conference of State Legislatures.

That list means Democrats are playing a lot of defense. All told, Democrats control 27 legislatures, and Republicans 14; holding on to power in the states with close margins will help them. But despite the interest from the DGA and the RGA, governors haven't historically been that involved in redistricting, letting state legislatures get into the weeds of the intricate computerized maps instead. And sometimes divided state governments wind up producing compromise maps, where Republicans and Democrats mutually agree to shift voters around in districts so neither side has much need to reach out past their base. Which means the line from "give money so our side can win this election" to "now we get new House seats" isn't quite as straightforward as the fundraisers would like people to believe it is.

That's not to say no one's trying to figure out what the Census might actually mean for the makeup of the House in a few years. Tucked away in some quiet offices around Washington, there are a few people working with Census data and playing around with computerized mapping programs. Four years ago, the American Federation of State, County and Municipal Employees launched a 527 group called the Foundation for the Future, precisely to prepare for redistricting and talk -- early -- to operatives in states who will be doing the real work next year. On the Republican side, a longtime operative named Tom Hoeffel is helping work on early drafts of possible maps.

"There are lots of opportunities for both parties," says Ricky Feller, AFSCME's deputy political director, who's working on some of the redistricting effort. "You look at some of the states -- clearly, the Republicans did a very good job where they were in control of the process in the last round of redistricting. There are potential opportunities for us to kind of undo some of the damage." For now, though, both parties may be looking more at the potential fundraising opportunity than at anything that comes further down the line.