Follow-up points on the WikiLeaks video

A few follow-up points to the discussion here over the last couple of days regarding the Iraq/WikiLeaks video:

(1) The more I think about it, the more astounding I find it that there could even be a debate over the fact that incidents like the one depicted on this video are exceedingly common, and not at all rare (let alone that vile "He-Hates-The-Troops!" smears would be directed at those who point out this basic truth).  Aside from the mountains of evidence making it undeniably clear how common such events are -- (a) the enormous number of dead civilians in Iraq; (b) the countless incidents where the U.S. military killed large numbers of civilians, lied about it, and then was forced by investigations to admit the truth; (c) the definitive statements from war correspondents and even our own soldiers about how common such incidents are -- just consider what Gen. Stanley McChrystal, the commander of the war in Afghanistan, said not more than a month ago:

In a stark assessment of shootings of locals by US troops at checkpoints in Afghanistan, Gen. Stanley McChrystal said in little-noticed comments last month that during his time as commander there, "We've shot an amazing number of people and killed a number and, to my knowledge, none has proven to have been a real threat to the force . . . . [T]o my knowledge, in the nine-plus months I've been here, not a single case where we have engaged in an escalation of force incident and hurt someone has it turned out that the vehicle had a suicide bomb or weapons in it and, in many cases, had families in it."

What rational person can maintain that incidents like the one in the Iraq video are extraordinary and rare when the top General in Afghanistan is stating publicly that -- even in Afghanistan, where avoidance of civilian casualties is a claimed top priority -- we're shooting an "amazing number" of completely innocent people, including "families"?  Do you think if we had videos of those checkpoint shootings (or the countless air attacks on civilians) that they would be any less appalling than what we see in the one WikiLeaks released?  McChrystal's comments were reported in The New York Times and yet barely caused a ripple.  Why?  Because this is what war is; it's what we do when we invade and occupy other countries.  It's hard to express the blinding jingoistic delusion necessary to insist -- in the face of this mountain of evidence and dead civilians left in the wake of our wars -- that the Apache attack is some sort of rare or exceptional event.   That's why the military concluded that what happened in this Apache attack (including the shooting of unarmed rescuers) is consistent with U.S. military policy:  because it is.

Chris Floyd has a concise and appropriately scathing commentary over this mentality that I recommend highly.  And former Marine Mike Stark comments on the controversy produced by these observations.

(2) The blogger Jotman has been relentlessly chronicling CNN's truly awful and propagnadistic "reporting" on the WikiLeaks tape -- see here and here.  Aside from CNN's constant attempts to justify and obscure what was done, they simply refuse to show the most graphic and harrowing (i.e., the most revealing) parts of the video.  Wolf Blitzer actually justified this self-censorship with the smug claim that it was "out of respect for the family members" of the victims -- as though they would want the evidence of what was done to their loved ones to be suppressed -- and other CNN programs are sticking a huge black box over the video during the most important parts so as to prevent their viewers from seeing what actually happened: 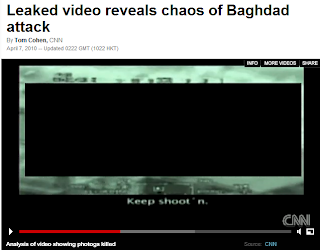 The video released by WikiLeaks has now been seen by close to 4 million people on YouTube alone, but CNN either refuses outright to show the most revealing parts or treats those parts like they're too naughty for their fragile, childish viewers to see.  This is a perfect example of how the American media helps to propagandize the public and obscure the truth:  it's virtually always the case that these realities of what our Government is doing are simply kept away from Americans, but in the rare instances where it has to be addressed (because of what WikiLeaks did), CNN takes affirmative steps to block its viewers from seeing what it really is.

(3) The New York Times has a fairly decent article this morning on the significance of WikiLeaks and why it matters.  And Mother Jones' David Kushner examines some of the controversies surrounding WikiLeaks and its founder and Editor Julian Assange (though someone identifying himself as Assange voiced some angry (and, I think, quite valid) objections to the article in the comment section).

Meanwhile, Gawker notes the irony that the U.S. military claims it cannot locate its own copy of the Apache attack video while WikiLeaks could -- yet another instance in the long line of cases where incriminating government evidence is ever-so-tragically "lost."

(4)  I was on CBC television last night in Canada discussing the WikiLeaks video, and that discussion be seen here.  The first part of the segment is with WikiLeaks activist and Icelandic Parliament member Birgitta Jonsdottir; my segment begins at roughly the 7:30 mark.

I'll also be on Al Jazeera this morning discussing these issues along with Bill Roggio, who defended the Apache attack in The Weekly Standard.  I'll post the video or the links once they are available.

UPDATE:  John Caruso compiles a hefty list proving how common such incidents are.