After a month of unusually heavy rains, another landslide adds to the chaos in the Brazilian city 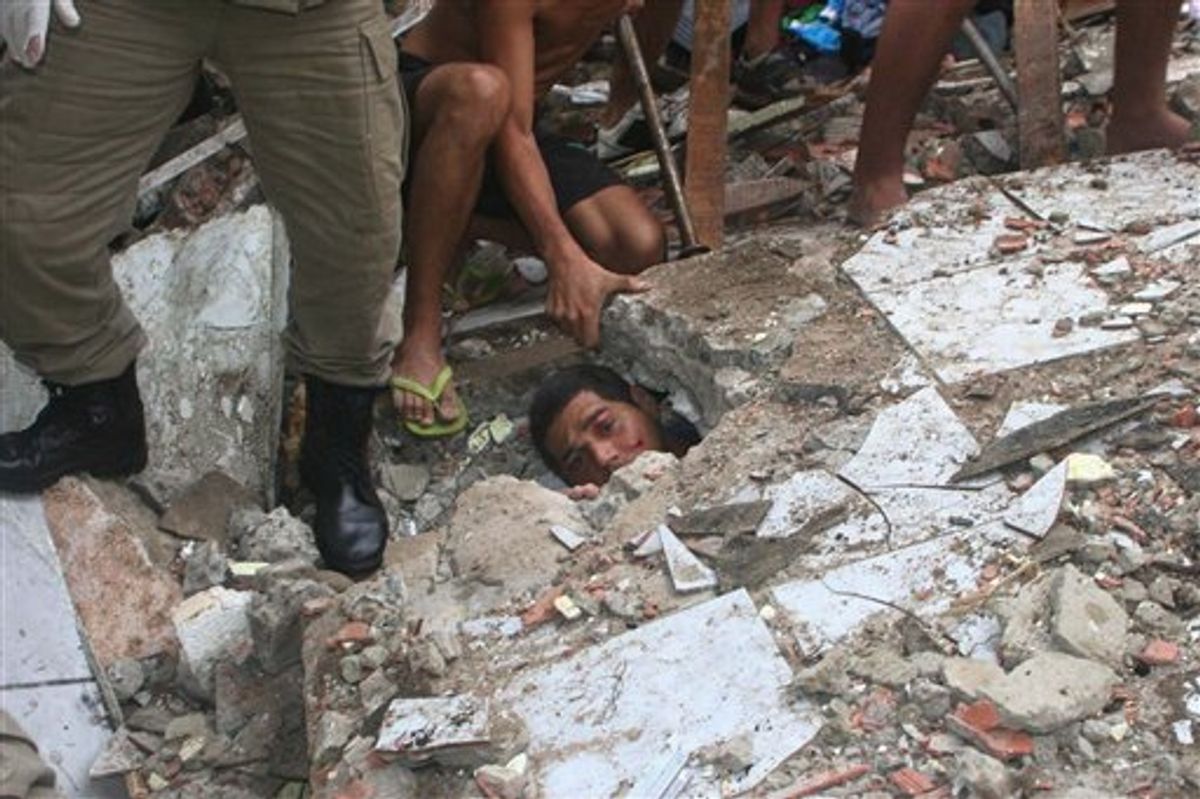 Carlos Eduardo Silva dos Santos, 24, peers out from under a wall where he is trapped as rescue workers try to free him after heavy rains in the Guarabita neighborhood of Rio de Janeiro, Wednesday, April 7, 2010. The heaviest rains in Rio de Janeiro's history triggered landslides Tuesday that killed at least 95 people as rising water turned roads into rivers and paralyzed Brazil's second-largest city. (AP Photo/Jadson Marques, Agencia O Globo) (AP)
--

At least 200 people were buried and feared dead under the latest landslide to hit a slum in Rio de Janeiro's metropolitan area, authorities said Thursday.

If confirmed, the deaths would raise the toll sharply from the 153 people already known to have perished in slides this week triggered by record rains.

Pedro Machado, subsecretary of Rio state's Civil Defense department, told Globo TV that as many as 60 houses and 200 people were buried in the Morro Bumba slum in Niteroi, neighboring Rio.

"In our experience, it's an instant death" for those caught in their homes at the time, Machado said.

Machado said the shantytown was built on a mountain of trash that accumulated for decades, making the ground there unstable and vulnerable to giving way.

"When I climbed atop the hill, the smell was very strange, bad," Machado said.

A fire department spokesman said six bodies had been found so far in the Morro Bumba and 28 were rescued after the mudslide hit late Wednesday.

Alves Souza, commander of the firefighters in the Niteroi rescue operations, said the wet, steep terrain posed a continued threat to anyone trapped in the wreckage and emergency crews alike.

"We have managed to recover two bodies and the work is very intense, given the fact that the volume of material we have here is very large," Souza said.

Firefighters said the official death toll stands at 153, but that does not include those buried in Morro Bumba.

Nearly all the deaths occurred in mudslides that smashed through slums -- yet another reminder that life in one of the world's most famous playgrounds is much different for the poor than it is for the rich.

Residents of the shantytowns often endure dangers such as the frequent shootouts between police and heavily armed drug gangs, and when heavy rain falls on slopes crowded with poorly built shacks, nature itself can deal out death.

Rio officials said they are going to step up forced evictions of slum residents living in at-risk areas.

Mayor Eduardo Paes announced that 1,500 families were going to be removed from their homes on in at least two Rio slums, and that more evictions were likely.

"I don't want to spend next summer sleepless, worrying if the rains are going to kill somebody," he told reporters, without saying when the relocations would occur.

The heavy rains plunged Rio into chaos this week, knocking down trees and power lines, opening up enormous craters in streets and sending wastewater flowing down to the city's white sand beaches, and it was nearly impossible to get anywhere in the city of 6 million people.

In the Rocinha slum, officials said 16 inches (41 centimeters) of rain has fallen so far this month -- three times the amount normally expected for all of April. Similar figures were seen across Rio's metropolitan area.