Tina Fey and Steve Carell save this "Date Night"

The romantic adventure is formulaic, but there's nothing ordinary about the comedy dream team starring in it 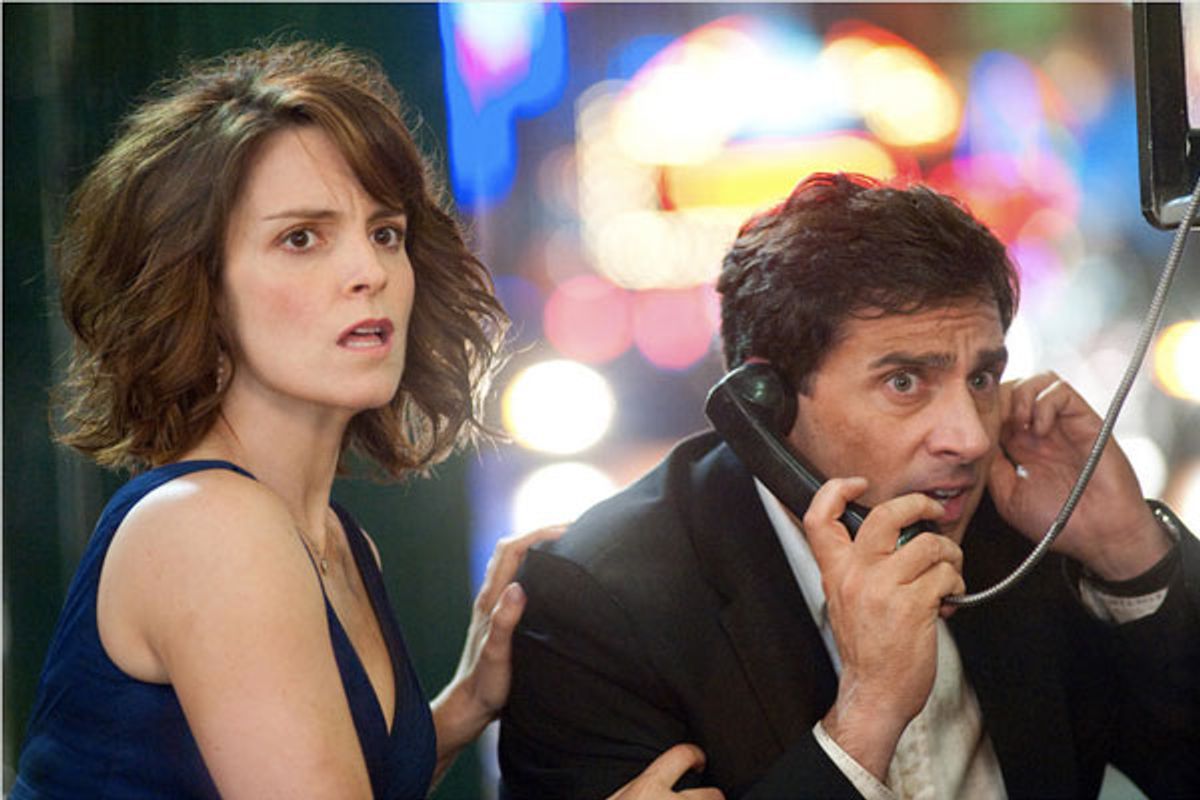 In the midst of the date night from hell, Claire (Tina Fey) and Phil (Steve Carell) make a frantic call for help.
--

Claire and Phil Foster are a believably weary suburban New Jersey couple. A working duo whose ostensibly romantic weekly "date night" consists mainly of planning their children's social calendars, they've reached the point in their relationship where what passes for a sexual come-on is a drooly removal of the bite guard and a halfhearted "I can rally."

So when their friends (Mark Ruffalo and Kristen Wiig) drop the bombshell that they're splitting up because they no longer wish to be merely "excellent roommates," the Fosters venture to shake up their own rut with a big night in Manhattan. And when a case of mistaken identity spirals out of control, they soon find themselves on an adventure that is part "Out of Towners" and part "After Hours," with a soupçon of "The Warriors'" urban odyssey. Can they rekindle their love, avoid getting killed, and get home in time to take the kids to school?

There isn't much in the deeply formulaic "Date Night" that's innovative in its execution. Will everyone in New York City be a wacky, scenery-noshing character? Will there be scenes of screaming people in speeding, screeching cars? Will "Night at the Museum" director Shawn Levy keep the action humming along at a light, superficial pace? As Tina Fey's best-known alter ego might say, you betcha!

But what comes as a welcome surprise is how "Date Night" manages to make sport of romantic movie conventions without being mean about them. Claire may be a classic uptight control freak and Phil may be a careless doofus, but the movie never feels the need to take them down a peg. Claire and Phil squabble, fall down and roll their eyes at each other plenty -- but unlike way too many rom-com characters, they always seem to hold each other in true regard. And why shouldn't they? Played by the comic dream team of Tina Fey and Steve Carell, they're equally goofy and flawed, but they're also authentically intelligent and funny. Their running gag of making up ridiculous back stories for their fellow restaurant patrons, for example, isn't just a bit of jokey levity – it's evidence that despite kids and work and sleeping with snore strips, these two are a man and woman who know how to make each other laugh.

Kudos, also, to the filmmakers for assembling such a damn likable array of supporting characters. Mark Wahlberg, as a stubbornly shirtless security expert, shines in every sense of the word. And James Franco and Mila Kunis take one memorable scene, bicker over nipple clamps, and steal it outright.

As a pleasant domestic comedy/action-adventure that, refreshingly, doesn't seem to hate its characters, "Date Night" is just fine. But is it good enough to merit hiring a baby sitter? I'd rather have some potato skins at the Teaneck Tavern.