Bacon, cheese, mayo-ish sauce and two slabs of fried chicken as the bread. A bite-by-bite account 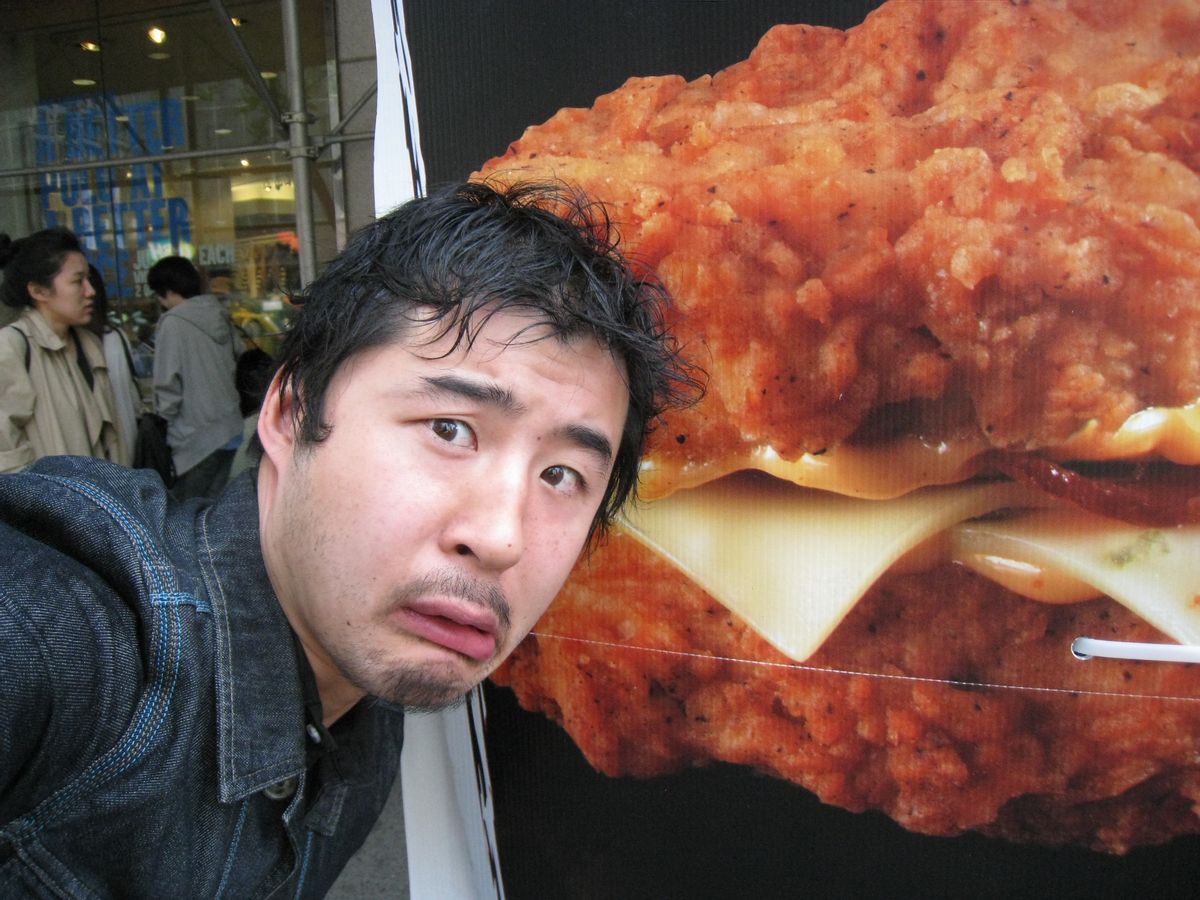 Francis vs. the KFC Double Down
--

Ladies and gentlemen: It's Double-D Day. After insane blogosphere buildup and a menacing countdown timer on its Web site, KFC finally released its Kraken: a sandwich made of bacon, cheese, mayo-ish sauce and two slabs of fried chicken as the bread.

Logic dictates that you have to look at the numbers. There are 540 calories in KFC's Double Down, about the same as McDonald's suddenly quaint Big Mac. But the Double Down, and everybody's peeking-through-covered-eyes reaction to it, is not about logic. It's about balls.

The balls of a fast food chain, in the middle of rational America's hand-wringing about obesity and sustainable eating, to come out with a sandwich made of bacon, cheese, mayo-ish sauce and two slabs of fried chicken as the bread. The balls of KFC, which, in the weak-willed '90s, changed its brand from Kentucky Fried Chicken to its lame initials because it didn't want you to have to say the word "fried" every time you spoke its name. The Double-D is so macho, so deeply, dumbly dude, it's a sandwich for people who want to take down Michelle Obama in an arm wrestle.

So, as a matter of art and science and anthropology, you know I was destined to try it. Make no mistake, I am a lover of fried chicken. Just yesterday, in fact, I cooked it and ate five pieces of it, in what I honestly believed to be a restrained fashion. But with the Double Down in hand, feeling its heft, seeing its weirdly pale skin, shining with oils and lipids, I'm suddenly intimidated. And seeing the square-ish cheese, floppy and flaccid where it sticks out from the tapered chicken breasts, this also suddenly looks ... just kind of goofy. But here goes, homies!

Bite 1: Salt! Oh God, salt! And I can already feel the grease wrap itself around my lips.

Bite 2: Wow. This is really tender. Like, really tender. What's the difference between chicken being supernaturally tender and unnaturally tender? You don't need teeth to eat this chicken. I guess that's a plus. But the question is, would it be responsible caretaking to feed this to anyone who doesn't have teeth? Also: salt!

Bite 3: This might be unprecedented, but two bites into this thing and I'm already making a tactical decision. I'm going for the whole slice of bacon sticking out the side. It's time to get this salt over with. But, in fairness to KFC, I didn't get the featured soda pairing. I'm sure the carbonation, sugar and phosphoric acid in a Pepsi would work really well in scraping the sodium from my tongue. Ask any serious chef: You have to design your food to work with your beverage pairings.

Bite 4: I just put all the bacon in my mouth at once. This is how that feels:

Bite 5: I'm making good headway, about halfway through. The gentle heat from the pepper jack cheese lets you know you're still alive. But I have to say, the chicken-breasts-as-bread are still making for weird appearances. Right now they're tilting apart from one another, cantilevering open, and I feel a little like I'm staring down a ghoulish mouth, with the second slice of bacon (Damn it, I thought I got rid of you!) like a tongue and the cheesy stalactites as teeth. Maybe this is more than you want to know.

Walking back to the office, I feel a strange pull back toward the paper bag crumpled in my hand. The salt burn feels a bit better. The tang from the mayo-ish sauce intrigues. The MSG entices. I'm thinking about going back. You know how they say a palate that's getting pounded with salt and fat and sugar acclimates, and soon wants only more salt and fat and sugar? It happens over weeks or months ... or, for many, lifetimes. I think for me and the Double Ds, that just happened in five minutes.

Bite 13: Good dear sweet lord Jesus in Heaven ... why did you make me finish it? WHY!? Can I blame the Masons?

In retrospect, though, the really funny thing about the Double Down is not that it exists, not that it's a dare pretending to be a lunch, but that it would be nothing special if they added a bun to it. Think about it. It'd be like, "What's that? A double chicken sandwich? Pffft. Snooze. Any jackass can make a double chicken sandwich." Somehow, by taking off the processed-food bread, KFC made this thing look deadly.

But, aside from greasier-than-normal fingers, it kind of doesn't work. I mean, I struggled for a minute, but I went right back and finished it. If they're going to be serious about turning their restaurant over to the This Is Why You're Fat crowd, they've got to come harder or don't come at all to the brute-food arms race. And if they do, they should take a word of advice from the CEO of Gillette. When pressured with three-bladed competitors he manned up to say, "Fuck everything, we're doing five blades."