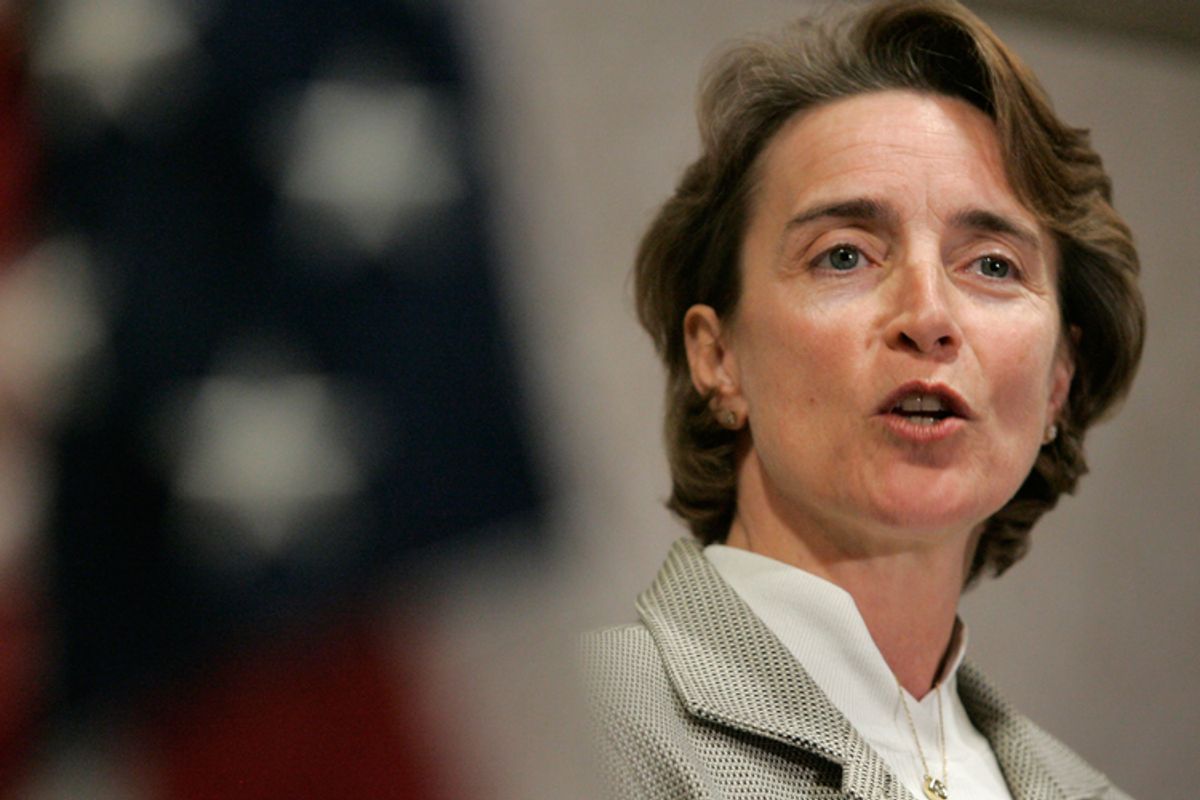 While discussing J.P. Morgan Chase's blow-out first quarter profits in an earnings call Wednesday morning, CEO Jamie Dimon put a price tag on the derivatives regulation currently being considered by Congress as part of comprehensive bank reform legislation. His bank, reported the New York Times' Cyrus Sanati, stood to lose as much as $2 billion annually, "depending on the real details."

Which really means: Depending on how successful Dimon and his big bank colleagues are in gutting proposals for derivatives reform over the next couple of weeks. The fight over banking reform is suddenly white hot, and derivatives regulation is a critical battlefield.

According to an enlightening new briefing paper by the Brookings Institution's Robert Litan, around 97 percent of the market in currently unregulated derivatives trading is dominated by just five banks. Among them are some familiar names: J.P. Morgan Chase, Citibank, Goldman Sachs, and Bank of America. Combined, the so-called derivative dealers club earns around $30 billion a year from their ability to control this market. Defending this cash machine is an extremely high priority.

So never mind the to-and-fro over the Consumer Financial Protection Agency, or the endless sparring over whether a "resolution authority" proposal will deal with the problem of too-big-to-fail banks. The politics of fighting the CFPA now appear to be too ugly even for the GOP, and the banks don't seem especially worried about any short-term impact on their profits from the resolution authority. Their main focus, according to the Wall Street Journal, is derivatives regulation, for a very simple reason. The measures that will make derivatives trading safer, more transparent and competitive, will unfortunately cut into their profits.

Unlike stocks and bonds, which are traded in public, most derivative deals are private agreements between two parties. Goldman, J.P. Morgan and Morgan Stanley have at least one common objective: To thwart or dilute proposals that would push trading in most derivatives onto exchanges or to "clearinghouses," which are middleman institutions set up to handle big transactions between banks.

Their main concern: Trading on exchanges or via clearinghouses could reveal more details about the pricing and structure of the deals, potentially benefiting rivals and clients, and in the process eating into profits. Banks have also argued that any requirements that their customers use standardized derivative products, instead of individually customized deals, would limit customers' flexibility.

Until Tuesday, the big worry among proponents of derivatives reform was that Blanche Lincoln, the Arkansas Democrat who chairs the Senate Agriculture Committee, which oversees the regulatory body responsible for most current derivatives regulation, the Commodity Trading Futures Commission, would attempt to undermine the provisions already included in the Dodd bill. But on Tuesday, Lincoln, possibly mindful of a primary attack from her left flank accusing her of being too weak on Wall Street, surprised the conventional wisdom by recommending a set of proposals that are even stronger than what's currently incorporated in the Dodd Bill. While some commentators are skeptical that Lincoln's plan has any chance of real success, the New York Times did note that the outline "drew praise" from Republican Sen. Olympia Snowe.

Which may explain why Senate Minority Leader Mitch McConnell has been blasting away at the Dodd bill in increasingly vehement tones of frustration all week. If the Democrats hold firm, they only need one or two Republican senators to break ranks to score their second big legislative success this year. And that puts the Republican leadership in a very tight spot. McConnell doesn't want to be seen publicly as doing Wall Street's bidding, but at the same time he is eager for Wall Street's financial support as the midterm election campaigns heat up.

On Monday, Fox Business News' Charlie Gasparino reported that McConnell and another conservative Republican senator, Texas' John Cornyn, met with a group of Wall Street executives to explain how "how financial executives might help prevent some of its least market-friendly aspects from becoming law by electing more Republicans."

The Senators explained they can't just oppose the Dodd bill -- they need to come up with a reform plan of their own, as they fight its least free-market components, such as the notion that the government can determine which banks are "too big to fail."

Which means, of course, suitcases of cash.

In return for that support, the banks obviously want their main beef taken care of: eviscerating derivatives regulation. But given the role that unregulated trading of derivatives played in the financial crisis, the GOP is likely finding that arguing for weaker derivatives oversight looks just as bad as attacking consumer financial protection.

Their only option appears to be an impossible contortion: To attempt to stop financial reform altogether by claiming it is too weak, by saying, as McConnell did on Wednesday, that the bill "guarantees future bailouts of Wall Street banks."

This is a display of hypocrisy that is impressive, even for the modern GOP. The big banks don't want key portions of the bill passed because they fear their profits will be crimped. So to serve their bidding, the GOP is attempting to kill the bill by framing it as too friendly to Wall Street.

No wonder Dodd is furious:

As President Barack Obama hosted a bipartisan meeting at the White House on the legislation, Dodd lashed out at Republicans for characterizing the bill as perpetuating endless taxpayer bailouts of failing financial firms. He said critics of the bill are spreading "outright falsehoods" that are "now being repeated by people who should know better and frankly do know better."

Bipartisan comity is in short supply this week. But no wonder: The GOP has a losing hand, and the Democrats seem plenty willing to call their bluff.