The former Alaska governor rallies the faithful. But so far, her political work seems limited to giving speeches 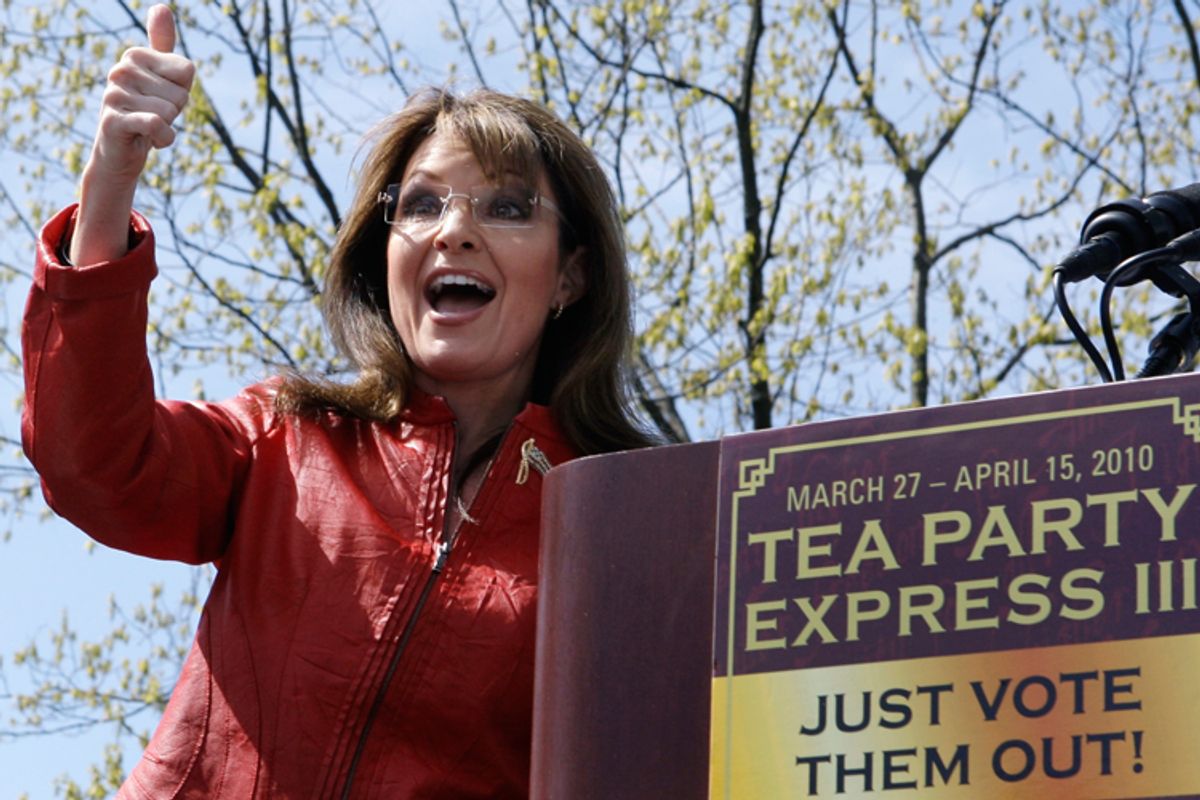 Sarah Palin gives a thumbs up to the crowd following her address during a stop of the Tea Party Express in Boston.
--

The Sarah Palin traveling carnival rolled into Boston Wednesday for a tea party rally. And the former Alaska governor-turned-celebrity conservative didn't disappoint the people who turned out on Boston Common to protest.

Exactly how many people saw her speech isn't clear. Fox News Channel and MSNBC were both showing it live -- until 11 a.m. Eastern rolled around, and it was time to go to a commercial. Neither came back to it. (I watched on CNN.com.) Palin was by far the biggest draw for the Boston rally; right after her, someone came out to sing a song about voting out Democrats, set to the tune of "New York, New York," which, as the Yankees' unofficial theme song, is sort of a strange choice for a crowd in the middle of downtown Boston.

But Palin sounded like she was just happy to be there. She ripped through her usual talking points -- cut taxes, the lamestream media helped Obama win in 2008, when Republicans take back Congress they can just refuse to fund the government -- and praised the tea party movement. (Though the group that sponsored the rally, like the one in Searchlight, Nev., she attended a few weeks ago, is actually a PAC run by GOP operatives.) Palin quoted Jonah Goldberg on the unfairness of the U.S. tax code -- "Americans now spend 100 days of the year working for the government before we even start to earn any money for ourselves" -- and, weirdly, quoted conservative actor Jon Voight as if he was an expert political organizer. "Jon Voight said the other day that we have got to be united, folks, to take this back," she said.

The speech was Palin's second before a big group of conservatives this week; she had flown to New Orleans to address the Southern Republican Leadership Conference over the weekend. But it's still not clear what her underlying strategy is, or whether she even has one. The contract for her public appearances that surfaced Tuesday makes it clear how big an adjustment from the life she's living now would be required to do the retail politicking of Iowa if she runs for president. You can't exactly stroll in to a grocery store in Fontanelle and demand (as her contract does) that questions be screened ahead of time.

And Palin's political operation, SarahPAC, has raised less money so far this year than the only other two Republicans who appear to be actively running for president, Mitt Romney and Tim Pawlenty. Palin took in about $400,000, while Pawlenty raised $566,000 and Romney raised $1.45 million. Some Republican operatives and activists say privately they don't really expect her to run.

"From now until November, when they say,'Yes we can,' we're gonna all say, 'Oh, no you don't,' because we're taking it back," Palin told the crowd in Boston. That may be so. But Palin's contribution to the fight, so far, seems limited to giving a speech every now and then.