A Church bigwig explains: Celibacy doesn't cause pedophilia, homosexuality does 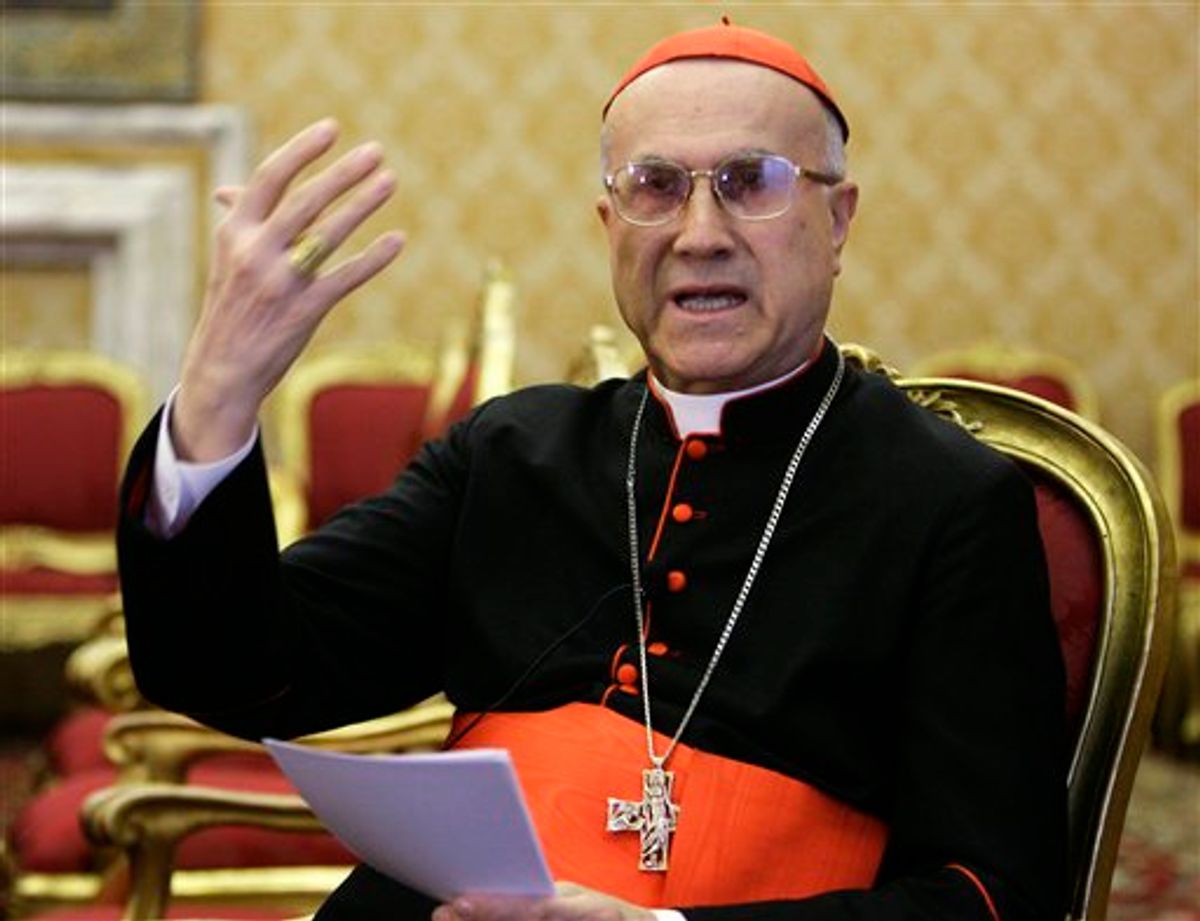 FILE - In this Tuesday, April 8, 2008 file photo Vatican Secretary of State Cardinal Tarcisio Bertone speaks during an interview by the Associated Press, at the Vatican. The Vatican on Wednesday, April 13, 2010 moved to defuse growing anger over remarks by the pope's top aide that the "problem'' behind the pedophile priest scandals is homosexuality and not to the church's celibacy requirement for clergy. Cardinal Bertone, the Holy See's No. 2 official as secretary of state, prompted an outpouring of irate words from advocacy groups for gays, politicians and even the French government, which portrayed his remarks earlier in this week in Chile as an affront to human rights. (AP Photo/Andrew Medichini, file) (Associated Press)
--

There's just nothing quite like watching a major world religion screw up on a level rarely seen outside the banking industry. So hats off the Catholic Church, which keeps trotting out grumpy old men to say terrible things on a pretty constant basis these days. The latest offender is Cardinal Tarcisio Bertone, the Holy See's secretary of state and the pope's top aide. Speaking in Chile on Monday, the high-ranking official in a church that has been plagued by widespread sexual abuse and cover-ups said, "Many psychologists, many psychiatrists, have demonstrated that there is no relationship between celibacy and pedophilia but many others have demonstrated, I was told recently, that there is a relationship between homosexuality and pedophilia. That is true. That is the problem." Ah, yes, that's the problem. The gays. When they're not busy destroying marriage, they're molesting children.

Let's get the obvious out the way first – it's not true. Science figured out a long time ago that being same-sex oriented has nothing to do with pedophilia.

But just in case that quip of Bertone's wasn't enough to make little rivulets of rage ooze out of your ears, it gets even better. Finding himself leaping yet again into damage control mode, Vatican spokesman Federico Lombardi whipped up the "clarification" on Wednesday that Bertone was referring to information from the Vatican's own abuse prosecutor, Monsignor Charles Scicluna.

In an interview last month, Scicluna explained, "We can say that about sixty percent of the cases chiefly involved sexual attraction towards adolescents of the same sex, another thirty percent involved heterosexual relations, and the remaining ten percent were cases of pedophilia in the true sense of the term; that is, based on sexual attraction towards prepubescent children."

So, Bertone, even your own guy can distinguish between pedophilia and homosexuality. Also, it's still sexual abuse if you're doing it to adolescents, whichever gender they are. You're welcome.

The latest gaffe provoked outrage from gay rights advocates and sentient people across the globe. French foreign ministry spokesman Bernard Valero said, "This is an unacceptable linkage and we condemn this." And in Chile, MP Hugo Gutierrez responded: "I'm shocked by these words from a senior dignitary of the Church."

And by the way, speaking of people with brains, most of the Church's critics aren't arguing that there's a big relationship between celibacy and pedophilia. We're more concerned about the one between raping kids and pedophilia. And none too pleased that the Vatican still doesn't to grasp that.

In his remarks Monday, Bertone went on to say, "We don't want to silence [this issue]. But we want this campaign to end." I hate to break it to the holy man, but I have a feeling that's one prayer that's going to go unanswered.