A mom posts a clip of her daughter's teary devastation and it goes viral. Consider this a parental wake-up call 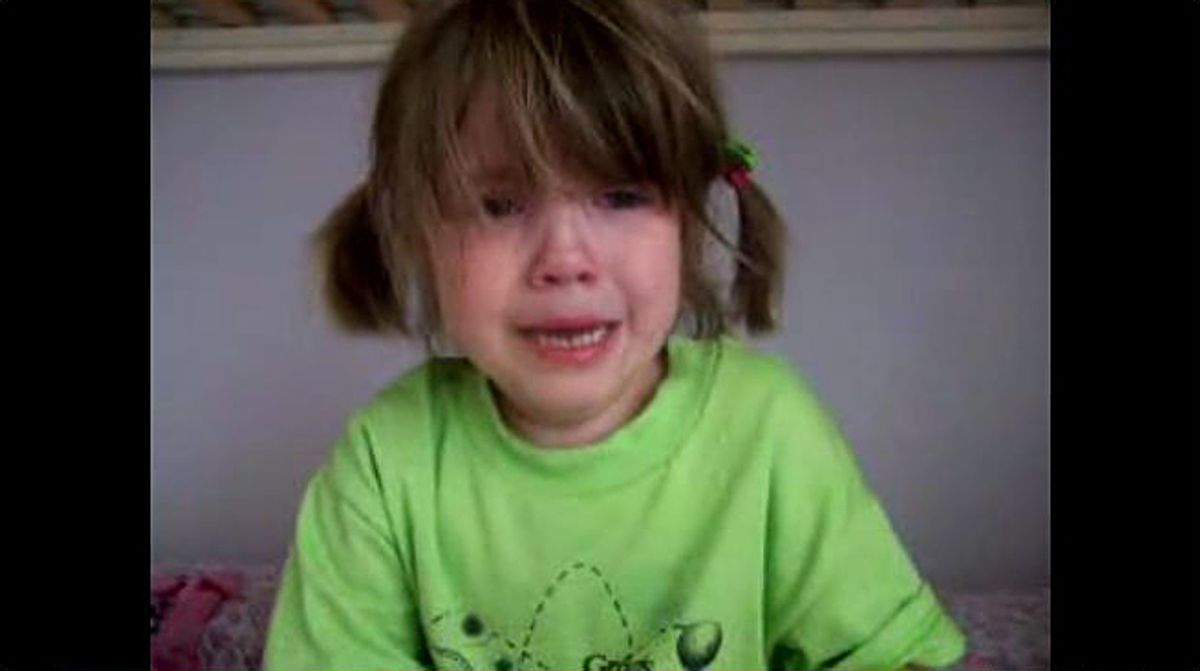 To be honest, I always thought that posting a video of your 7-year-old son David tripping his brains out after the dentist was a massive jerk move. Likewise, had it been my child wailing that his brother Charlie bit his finger or even experiencing the pain of learning that he is not a single lady, and will therefore not be putting a ring on it, my first response would not have been to record and share the experience. I also know that I'm in the seemingly humorless minority here, and that one child's future traumatic memory is the world's hilarious viral video.

But when YouTube subscriber heatherfife uploaded a video of her 4-year-old daughter having a very 4-year-old response to some big news, and called it "Heartbreak," it was no laughing matter. In it, her little girl, whose family is soon moving to Japan, is clearly already in the throes of an epic sobbing jag. Red-eyed and teary, she explains that she "really likes" her 15-year-old teacher Steven and doesn't want to leave him. "I don't want to go away!" she snuffles. "I love him!" Mom, who wrote that she "had to document this moment for posterity," categorized the clip in "comedy" and tagged it "love heartbreak crying hysterical funny."

The 2-year-old clip, part of a disturbingly robust collection of YouTube videos of kids crying, suddenly blew up this week when Best Week Ever posted it with headline "Well, This Little Girl Is Going to Grow Up and Murder a Boyfriend Named Steven" and the warning, "I promise you this is more murder-y than cute." Buzzfeed then swiftly posted it, with the tags "viral" and "cute."

As it turns out, while kids getting the crap scared out of them is apparently comic gold, embracing their grief is not. Online commenters, rarely known for their abundant empathy, quickly reached something surprisingly close to consensus. As a Buzzfeed post summed it up: "Maybe it's time to put down the camera and just hug your kid. Not everything has to be YouTubed." On Babble, Bethany Sanders asked "Did YouTube Mom Go Too Far?" saying, "I don’t think it’s cute, I think it’s really sad."

But where's the line between cute and sad? What's flat-out cruel? Recording a heartbroken preschooler who's moving halfway across the world seems like a pretty clear sensitivity failure, but what about one who's just having an old-fashioned temper tantrum? Or falling on his face? Come to think of it, even when a child is doing something so adorable it'll make your brain melt, is it really always a hot idea to share it with the planet?

Children are natural hams, to be sure. My own life ended a little the day my daughters figured out there was a video option on my phone. But our family code has always been that my girls have a say in how they are represented to the world -- and if they're too young to grasp that concept, they're too young for me to do it. I also think there's a vast world of difference between sharing something that's ostensibly a performance, like singing a song or reading a book, and exposing to the world an unguarded and vulnerable moment of someone else's childhood.

I don't hold anyone else to my rules; in fact, I frequently enjoy watching my friends' movies of their children on Facebook and YouTube. But the outpouring of discomfort over heatherfife's post is a healthy reality check for all of us parents. I screw up as a mom on a daily basis, so it helps to keep things really simple: If my daughters are hurt or sad or needing attention, that's not a moment to think, "This is GREAT material," and fire up the Flip. So if you want to laugh at the pain or the pratfalls of my family on YouTube, you'll have to settle for me. Because my daughters and their tears, their tantrums, and their drooly returns from the dentist are off-limits.