How Democrats will fight back on Tea Party anniversary

Taxes have gone down, not up, since last year, but Democrats are mostly talking bank reform, not IRS bills 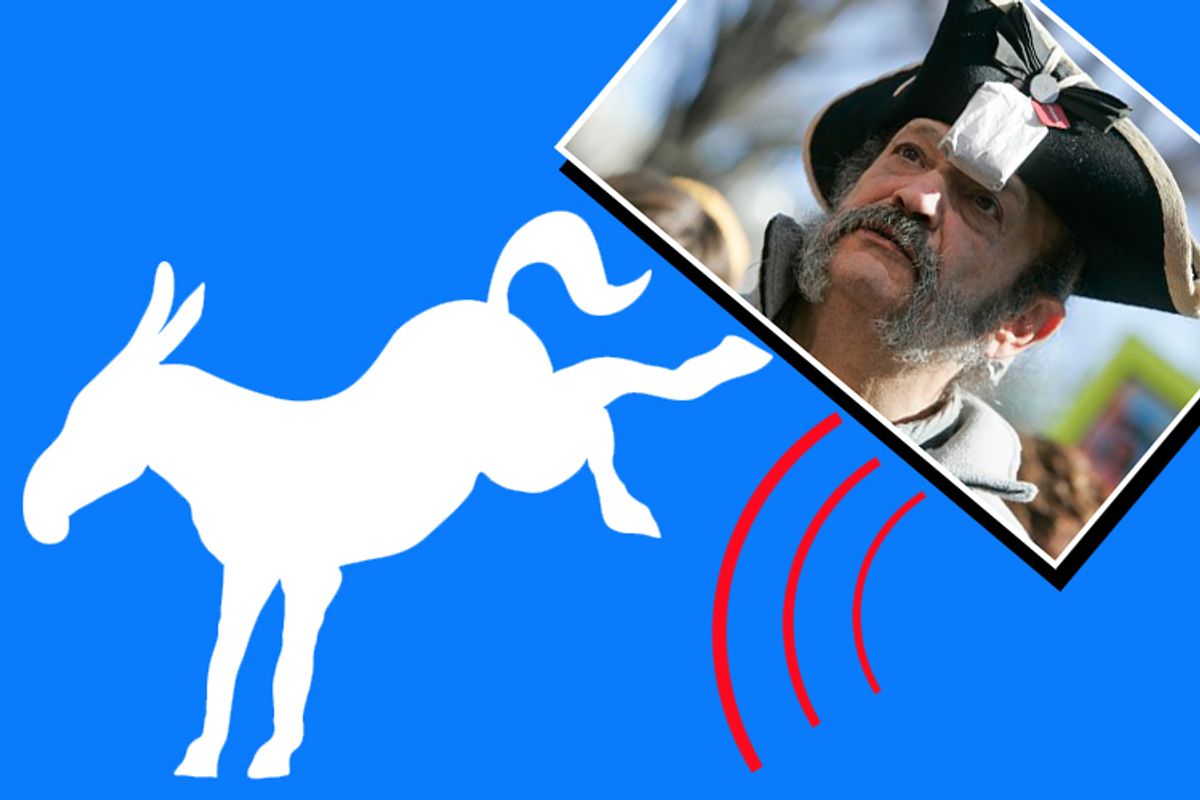 A year ago, thousands of people gathered around the country to throw tea bags at the White House, suggest that Texas should secede from the union and generally holler about the evils of the federal government and everything it stands for. The Tea Party movement had been unleashed.

Many of those same people will gather Thursday to grumble some more -- about healthcare reform, about the deficit, and, naturally, on April 15, about taxes. Only this time, the individual income tax bills they'll be marking will be about $173 billion lower, nationwide, than they were a year ago, and tax refunds are up 10 percent this year.

As the Tea Party marks its first birthday, the movement is clearly growing from its start as a fringe collection of disgruntled conservatives and libertarians; at this point, it's the source of just about all the energy in the Republican Party establishment, and as a result, the GOP is trying to glom on to the movement. One in 10 Americans tell pollsters they're part of the movement (though 45 percent say they don't know enough about Tea Partiers to agree or disagree with them). Despite the facts, the movement seems to be gaining momentum. One of the targets of the Tea Party Express's "Vote Them Out" campaign, Rep. Bart Stupak, retired from Congress, right as the group started holding events in his district. And more people say they're taxed too much than say they pay the right amount -- by a higher share than last year.

So the challenge for Democrats, a year after their most exuberant opponents burst onto the scene, is to figure out how to push back against yet another series of Tea Party rallies without giving the movement the kind of credibility that comes with direct attention. "These demonstrations are becoming fairly commonplace," one Democrat on Capitol Hill says. "Responding to them would become almost a full-time job."

Few official counter-programming events are scheduled here in Washington. Vice President Biden, the administration's point man on last year's stimulus package -- the vehicle for most of the tax cuts that lowered this year's IRS tabs -- will talk about the cuts during a speech in Pennsylvania. Senate Democrats are planning a press conference featuring regular folks who benefited from the changes.

The administration has been trying to highlight tax cuts for weeks. Five different Cabinet secretaries have gone on the road to do events about the stimulus bill; President Obama talked about tax relief in his weekly radio (and YouTube) address on Saturday. "In tough times, when many families are having trouble just making it all work, Tax Day can seem even more daunting," Obama said. "This year, however, many Americans are seeing some welcome relief." A post on the White House blog by communications director Dan Pfeiffer indirectly picked up the argument with the Tea Party types on Tuesday. "While some critics and media outlets may want to mislead the public, or cherry-pick provisions to give another impression, there is no debating the fact that making the tax code more fair for the middle class, and helping working families get through these tough economic times has been the central plank of the president's agenda," Pfeiffer wrote. The White House also has a "Tax Savings Tool" online, where taxpayers (and voters) can answer questions to highlight tax credits they might have missed while filling out their 1040s.

Where Democratic strategists think they can be most effective in pushing back against the Tea Party celebrations, though, actually has little to do with the IRS. Listen to Democratic politicians on Thursday, and you're likely to hear more about Wall Street than about tax cuts. The looming fight in Congress about reforming financial regulations plays directly into the populist sentiment that the Tea Partiers have been shouting about for a year -- only this time, Democrats are trying to position themselves on the right side of the argument politically, after they wound up being outflanked on the stimulus and on healthcare. And it's Republicans, insisting that reform shouldn't pass because it will lead to more bailouts, whom Democrats want to paint as banks' best friends.

"Wall Street took advantage of America," Senate Majority Leader Harry Reid told reporters Tuesday. "It's now our turn to look at Wall Street, have them contribute to a better America, and that's what this bill's all about."

That kind of rhetoric may not make the average Tea Party activist think twice about which party to support (the GOP) or which party to oppose (Democrats). But it could help persuade voters that the angry voices on Fox News aren't necessarily telling the full story. As the Tea Party movement showed for the last year, sometimes the best defense is a good offense.