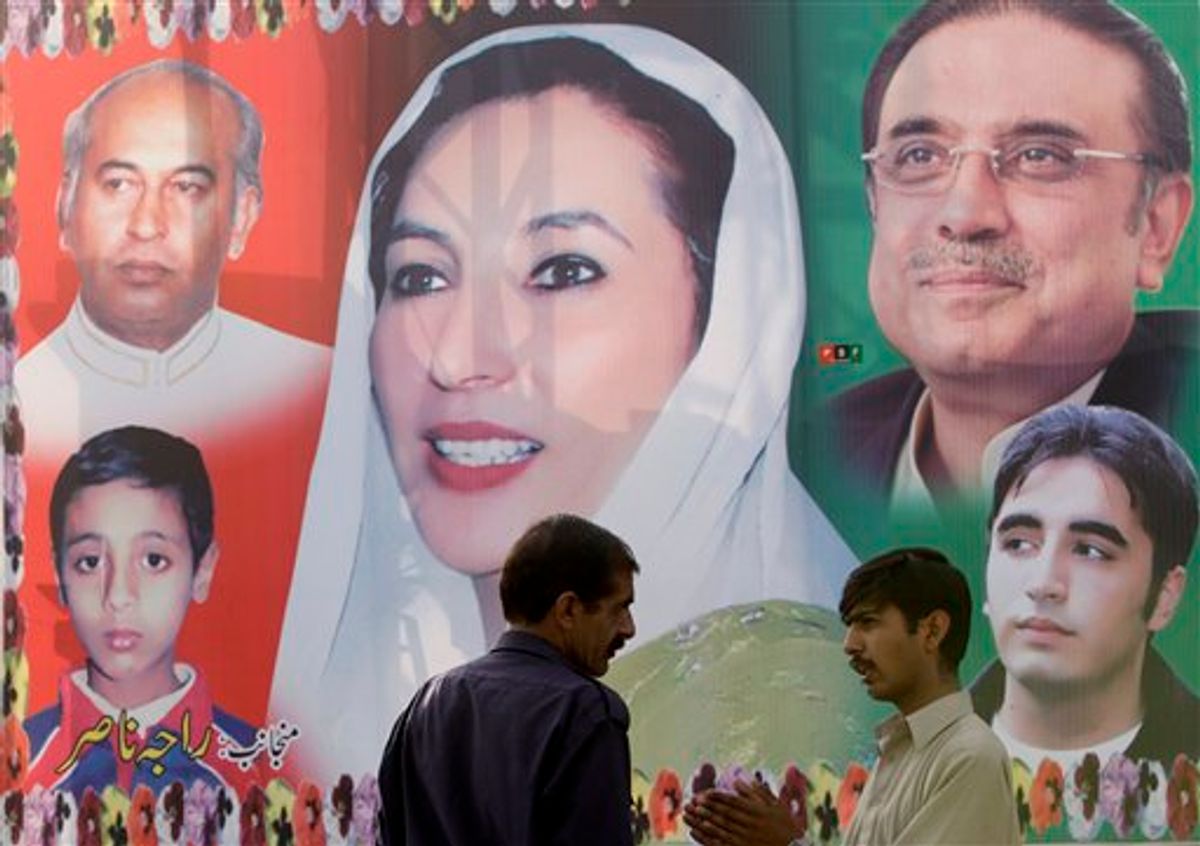 Pakistani men chat at each other in front of a poster of former Prime Minister Benazir Bhutto, center, in Rawalpindi, Pakistan, Friday, April 16, 2010. A new U.N. report that blames Pakistan's security establishment for failing to stop the assassination of Bhutto paves the way for a "proper police investigation" into her killing, aides to her widower, said Friday. (AP Photo/Vincent Thian) (AP)
--

A lack of political will and fear of upsetting powerful vested interests will likely scupper any efforts to find Benazir Bhutto's assassins, analysts said Friday, a day after a U.N. report blamed the former military regime for failing to protect her and called for a through investigation.

The publication of the report led to fresh calls for a new probe into the killing of the former prime minister, but they were met with skepticism that the killers would be brought to justice. That outcome would be par for the course in Pakistan, whose history is studded with high-profile political assassinations -- including the country's first president and two of Bhutto's brothers -- that remain a mystery to this day.

"If you look at the country's traditions, it seems we may never know," said Ishtiaq Ahmad, a professor of international relations at Quaid-i-Azam University in Islamabad. "The government is in crisis, there is a war on terror going on. This is not a normal situation."

Many critics noted the current government -- led by Bhutto's widower, President Asif Ali Zardari, and made up of members of her political party -- had not made the investigation into her death a top priority despite being in power for the last 18 months.

Bhutto was killed on Dec. 27, 2007 in a gun and suicide-bomb attack as she was leaving a rally in Rawalpindi city, where she was campaigning to return her party to power in elections after returning from nearly nine years in self-imposed exile.

The country was then ruled by the deeply unpopular ex-President Pervez Musharraf and battered -- as now -- by al-Qaida and Taliban violence. Supporters of Bhutto immediately hinted that Musharraf or his allies in the security forces may have played a role in the killing in order to prevent her from returning to power.

The United Nations was tasked with investigating the circumstances surrounding the death, not revealing the killers.

The report was highly critical of steps taken by investigators in the aftermath of the death, including the hosing down of the crime scene, the failure to perform an autopsy and their decision to hold a media conference the day after in which they blamed a Taliban commander. It also said Musharraf failed to make serious efforts to ensure her safety.

The report was welcomed by the government, which said it validated its earlier suspicions of Musharraf. Presidential spokesman Farhatullah Babar said the report "was a shot in the arm into ongoing investigations" into her death, referring to a reopened probe in 2009.

But the U.N said that "it is unclear to what extent even this investigation will be free to conduct an unfettered pursuit of the truth."

The investigators identified two main threats facing Bhutto -- Islamist extremists like al-Qaida and the Taliban who opposed her links to the West and secular outlook, and members of the "Pakistani Establishment," the term used locally to refer to a powerful and shady network of military, intelligence, political and business leaders who many people believe are in real control of the country.

The report said that group -- which in the past has forged links with Islamist militants it deployed in Afghanistan and India -- feared her return to the country would threaten their position and interests.

Musharraf aide Rashid Qureshi said the report was "a pack of lies" and that Musharraf -- currently living abroad -- was not responsible.

Cyril Almedia, a columnist for the respected Dawn newspaper, said he didn't think the weak Zardari government would investigate the slaying thoroughly for fear of upsetting the military, which despite being nominally under the control of the civilian government still pulls many of its strings. Its loyalty extends to its former chief, Musharraf.

"This entire report fingers Musharraf. I don't think the government of Zardari will be taking up that fight right now," said Almedia. "To date they have shown an extraordinary amount of deference to the Pakistan army and the things that concern it."

Since the Bhutto killing, Pakistan has been rocked by scores of major terrorist attacks that have killed thousands and led to fears the country was on the brink of collapse. Few of the attacks have been investigated transparently and court is conducted behind closed doors, meaning it is impossible for the public to judge the evidence presented against the suspects.

Five people have been accused by authorities of involvement in the Bhutto assassination -- although they are not believed to be the masterminds. A hearing was scheduled for April 21 for the five, jail official Mohammed Zafar said.

Skepticism about the likelihood of Bhutto's killers being punished was echoed on the street.

"It seems that the Benazir murder case has gone into the doldrums and we will never find out who the real murderer was," said Waseem Siddiqui, a 32-year government employee who stayed up until dawn to watch live coverage of the media conference with U.N. investigators in New York.