No, it's not a hoax -- but the British street artist's hilarious documentary is a head-spinning, wild ride 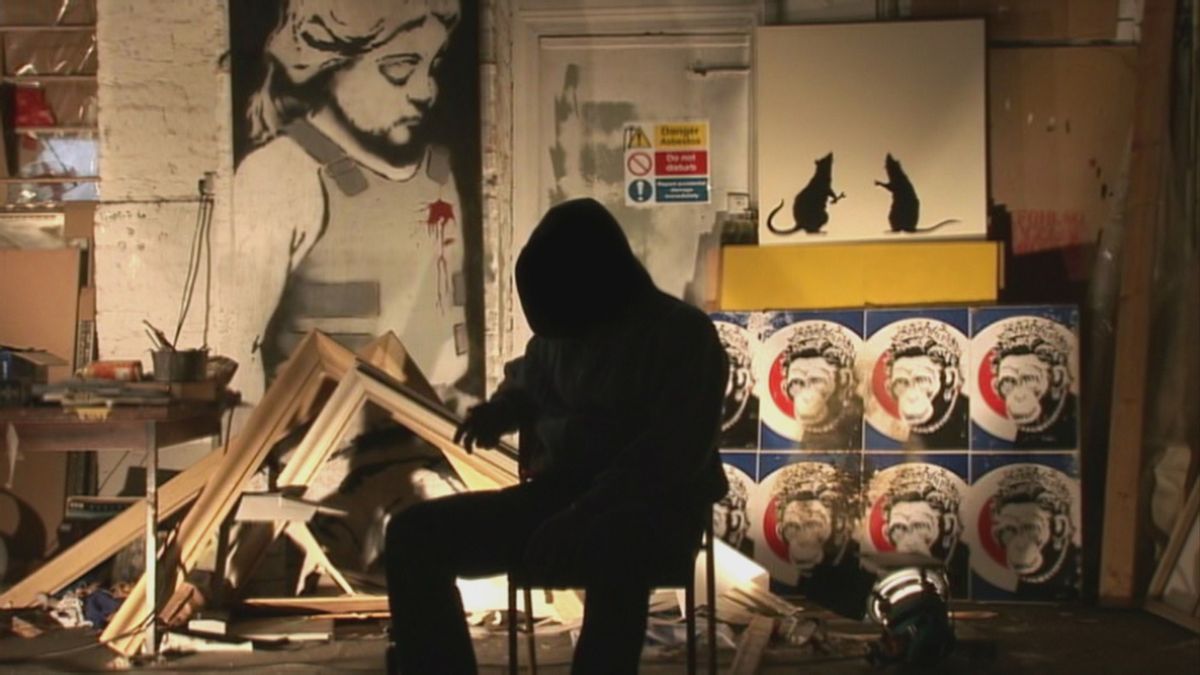 A still from "Exit Through the Gift Shop."
--

Sincerity always poses problems for the news media. Maybe the press has professionally inoculated itself with a vigorous blend of skepticism and cynicism, and maybe it's just grown ever more fearful of being punked by pranksters, celebrities and presidents. One can only wish the New York Times had viewed the Bush administration's call to war with half the caution with which it has approached "Exit Through the Gift Shop," the new documentary made (or presided over, or something) by the mysterious British street artist Banksy.

Commentators for the Times, National Public Radio and elsewhere have become hypnotized by the question of whether this fascinating and often exciting film about the global rise of guerrilla art, Banksy's own career as a provocateur and the genesis of a sub-Banksy pop artist called Mr. Brainwash might itself be some kind of meta-fictional Banksy prank. I felt some of the same anxiety after first seeing "Exit Through the Gift Shop" a few months ago at Sundance, but I now think that reaction dramatically misses the point of the film.

Banksy offers a heady and hilarious voyage through the underworld of contemporary art that poses all kinds of puzzlers about the role, meaning and context of allegedly subversive art in a consumer society. "Exit Through the Gift Shop" is of a piece with Banksy's murals and installations -- bending a London phone booth in half, hanging his own "Old Master" painting in the Tate Gallery, planting a dummy wearing an orange Gitmo jumpsuit within a Disneyland ride -- in many ways. It's both a work of art and a process, in which the subject and object of creation seem to trade places. It's meant to shift your perspective, both subtly and dramatically, no matter where you stand on the value of guerrilla art like Banksy's. Moreover, it's both a documentary that captures Banksy practicing his daring craft and an elaborate joke at his own expense that depicts him in an unexpected light.

Narrated by Rhys Ifans in plummy, mock-BBC tones, "Exit Through the Gift Shop" begins as a story about would-be filmmaker Thierry Guetta, a strange little French émigré who ran a vintage clothing store in Los Angeles and whose cousin was the Paris graffiti artist known as Space Invader. (You can guess what his stencils look like.) Guetta began compulsively documenting his cousin's work with a video camera, and then moved on to other prominent street artists, including Shepard Fairey -- now famous for his iconic Obama images -- and finally, after a great deal of patience and detective work, the notoriously elusive Banksy. (According to his Wikipedia entry, Banksy is originally from Bristol, in southern England, and is about 35. His stencil work began to appear on the streets of Bristol and London around 2000.)

But after Banksy and Guetta start hanging out, a peculiar exchange follows: The artist becomes the director, and the filmmaker becomes his subject. Banksy, who is seen in the film delivering wry expositions -- severely backlit, in a hoodie, with his voice masked -- came to realize that Guetta was unable or unwilling to make a coherent film out of all his footage, and took over the project himself. Encouraged by Banksy to put down the camera and create his own art, Guetta transformed himself into Mr. Brainwash -- at best, a miscellaneous repurposer of pop-culture images already adopted by other artists -- and succeeded beyond anyone's expectations.

This film has many levels, but in no sense is it insincere, or an attempt to trick you. If anything, it's a rueful, comic exploration of what happens when artists like Banksy and Fairey, who have set themselves up as subversive opponents of the pretentious, big-money art establishment, see their own weapons used against them. Despite their rebel status, Banksy and Fairey are forthright about clinging to relatively old-fashioned ideas about artistic craft, training and vision. Somebody like Guetta, who lacks any art education or knowledge of art history, and whose aesthetic is mainlined from every prominent pop or street artist since Andy Warhol, threatens to undermine their entire raison d'être. To put it more directly: They're good and he isn't, but a whole lot of people apparently can't tell the difference.

Banksy himself seems relaxed and even jovial about this. He has said he doesn't want to extend his own artistic career beyond its point of social or political usefulness, and the ultimate lesson of "Exit Through the Gift Shop" is exactly what its title implies -- that all the best ideas of all the most brilliant artists are ultimately rendered into more crap for sale. As Banksy's London dealer muses late in the film, on the subject of Mr. Brainwash: "Good for Thierry if he can pull it off. At the same time, the joke's on ... well, I'm not sure who the joke's on. I'm not even sure there is a joke."

"Exit Through the Gift Shop" is now playing in New York, Los Angeles and San Francisco. It opens April 23 in Boston, Philadelphia and Seattle; April 30 in Atlanta, Baltimore, Chicago, Denver, Minneapolis, San Diego and Washington; May 7 in Indianapolis and Toronto; and May 21 in Austin, Texas, with other cities to be announced.