How to make a vinaigrette, and everything you need to know about them 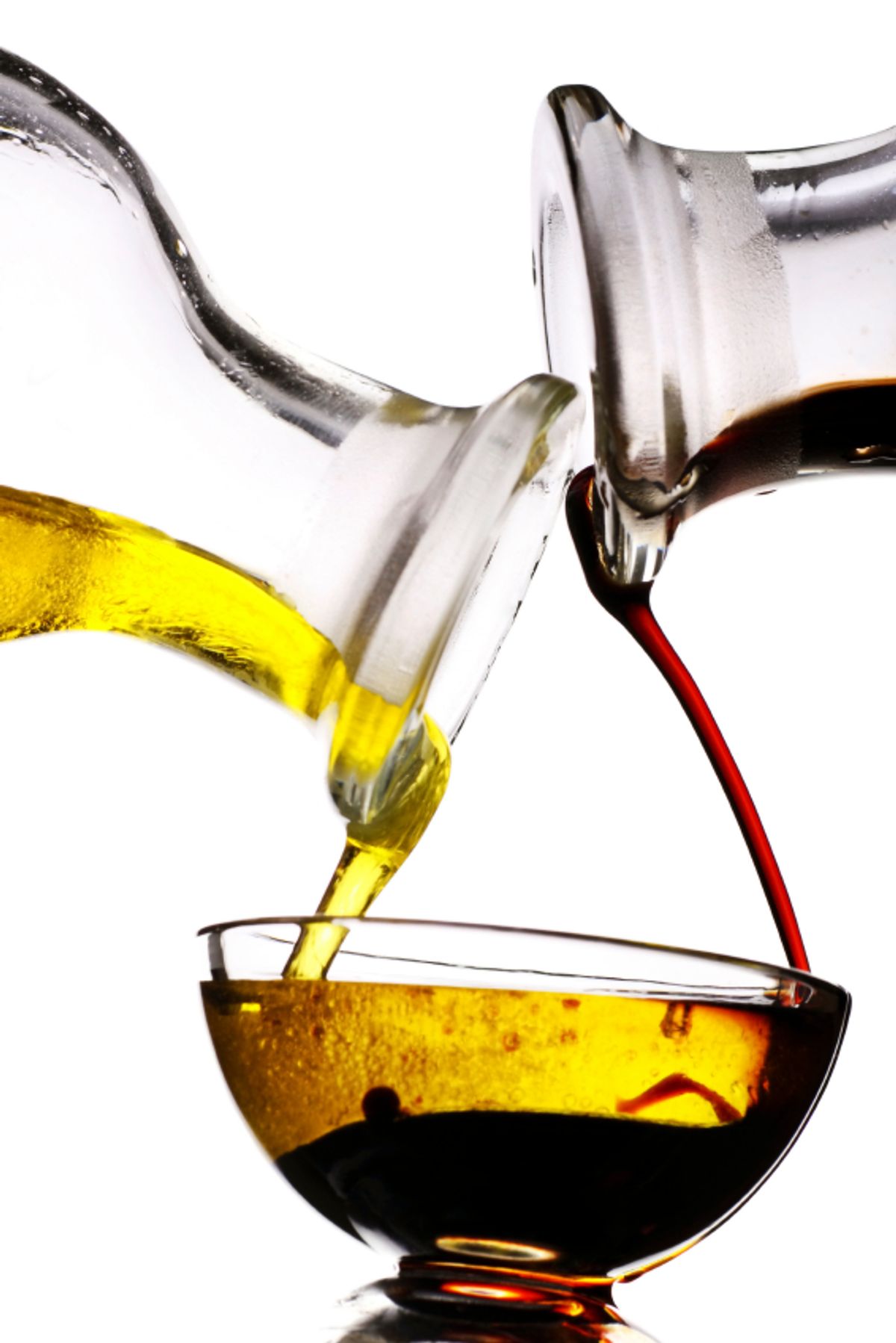 This is how to make a vinaigrette: Take vinegar. Take oil. Mix. OK, thanks for reading! See you next week!

Meanwhile, back at Salon:

"That's it? That's your cooking column for the week?"

"We're paying you for this, you know."

"You would like to keep getting paid, wouldn't you?"

Well, hello again! Sorry, I must have gotten cut off there…

Anyway, despite the obvious simplicity of how to make a vinaigrette, there are wonderful, hidden complexities in it. (How come some separate back into oil and vinegar and some don't? Why do some taste so much better than just oil and vinegar?) But even beyond that, what fascinates me about vinaigrettes is what they can teach us about how we taste food.

What it means to balance tastes

"Balance" is a word chefs throw around all the time, and what they mean by it is combining tastes in such a way that they temper and complement one another, with no one aspect overpowering the whole. Think of it this way: Drinking lemon juice straight-up is painful, but add some sugar to balance the tartness and: Boom! Lemonade!

So sugar will balance acidity and tartness, and vice versa. Salt and sugar also work on each other this way, and salt and tartness to some degree, too. Richness — oiliness and fattiness — is interesting because it's not technically one of the four tastes (sweet, salty, sour and bitter), but it has a balancing relationship with tartness, which is why we put pickles and ketchup on fatty burgers, eat pork with sauerkraut, and why it's always so surprising when someone points out that the main flavors in mayonnaise are oil and lemon. What? Yes. Mayonnaise is basically a sauce of oil and lemon.

So a vinaigrette is a dressing (or sauce, technically) that plays specifically on the balance between acid and oil. For me, a true balance is one where you really kind of can't tell where the oiliness begins and the tartness ends, and the two seem just to swirl around each other. But some people prefer a vinaigrette that hits you sharply with its sourness in the beginning, mellowing to the richness of oil, and there are those who like theirs mainly slick and rich, with a note of tartness just to lighten things up.

Here's a fascinating exercise: Take a vinegar and an oil you like. They don't have to be amazing, but palatable would be good. Pour one tablespoon of the vinegar and three tablespoons of oil into small jar with a lid. (The standard ratio for vinaigrettes is 1-to-3, but naturally, since vinegars and oils and people differ, you'll have to adjust to your own taste.) Shake vigorously until they combine, and taste it. What do you notice first? Tartness? Oil? Think about how the tastes change — does the mixture feel as if it goes from one to the other? If it's too sharp, try adding more oil. If it tastes kind of flabby or greasy, try adding a little more vinegar. Play around with it. Probably none of these will be delicious (that's what seasonings are for), but the point is to get a sense of how you prefer your balance — is it more toward the acid, or more toward the oil?

The elements of a vinaigrette, and their purpose

A vinaigrette can of course be just oil and vinegar, but there are a few other common elements.

Acid: Vinegar, or an acidic juice like lemon or lime. Not all vinegars are the same, by a long shot, and the really good ones are worth spending some money on — they can be complex and mellow and amazing, the utter opposite of, say, regular distilled white vinegar, which is harsh and has no flavor other than punched-in-the-face sour. And you're never going to use a lot of it, so even an expensive bottle can be a great value for how much flavor you get out of it. (If you're interested in learning more about vinegars, this is a great place to start.) But as a general guide, choosing a vinegar for your vinaigrette is a little like choosing wine — a white wine vinegar will taste and feel a little lighter than a red wine vinegar; an aged sherry vinegar should be a little fuller and more complex, with oaky notes. A light salad of very mild lettuces, for instance, would be sparkle with a white wine vinaigrette, but might be overpowered by an aged sherry vinaigrette.

Aromatics: Herbs, a minced clove of garlic, or a finely chopped shallot (my favorite, especially with a good aged sherry vinegar — boom!) can add a lot of flavor to a vinaigrette. The key, if you're using garlic or shallot, is to let it sit in the vinegar for 20 minutes before you mix it with the oil. I don't know exactly why, but the acid brings out and mellows their oniony flavors, making them round and delicious and taming their raw bite. Fresh herbs like mint, basil and parsley are wonderful just chopped right into the salad, but dried or tougher fresh herbs like thyme or rosemary also benefit from soaking in the vinegar first.

Seasonings: The unsalted life is not worth living, so a pinch of salt dissolved in the vinegar at the start will spark the flavors of your vinaigrette immensely. A touch of sugar will help you take the edge off the acidity if your vinegar is a little overly sour. Of course, a few cracks of black or white pepper are also always welcome. Other ground spices are wonderful, too. Citrus zest. Soy sauce. Sriracha. Hot sauce. Whatever. Go crazy.

Stabilizer: Try not to fall asleep for two minutes, but I'm going to talk about stabilizers and temporary and permanent emulsions. Are you still there? Hello? Sexomatic! (That always gets people's attention.) Anyway, we'll talk a lot more about emulsions another time, when we get to making mayonnaise, but an emulsion in cooking mainly refers to when you get oil and water to mix. (You know how they're not supposed to mix? Well, they do. Kinda. But they don't like to.) A well-made mayonnaise is a permanent emulsion, meaning it's going to stay how it is forever. Many vinaigrettes are temporary emulsions, which is to say that you can get the oil and vinegar to combine into a smooth sauce for a while, but it will eventually "break" or separate back into a pool of oil sitting on top of a layer of vinegar.

There are two ways to keep them emulsified longer, though. One is agitation, breaking the two liquids into molecules so that they'll float around one another without recombining with their own kind to form those layers. The more broken up the molecules, the longer the mixture will stay emulsified, so while they might separate after a few minutes if you whisk them together (which is often fine), the vinaigrette will stay emulsified much longer if you use a blender.

The other way is to add a stabilizer, which is often something as simple as mustard, powdered spices, or maybe a syrup or fruit reduction. These things will float around in that molecular mix, getting in the way, and preventing the oil molecules from hooking back up with each other. You'll notice, too, that all these stabilizers are tasty things, so they add plenty of flavor as well.

Oil: What kind of oil to use? Mainly the question here is flavor: Some oils, like canola, are neutral and will magnify but won't get in the way of other flavors. Some people insist all vinaigrettes must be made of fabulous extra-virgin olive oils, and I hear their point, but that's a matter of taste; sometimes chefs like to cut their extra-virgin olive oils with canola or grapeseed or another neutral oil because those oils can be too fabulous — too strong in flavor (and too expensive). And then there are what I call the "garnish oils": Asian sesame oil, pumpkin seed oil, walnut and other nut oils. These all have wonderful flavor, but are usually too strong to use as the main oil; you can use a more gentle oil as your base and then add a little bit of this stuff for flavor at the end.

Understanding those basic elements, use your own creativity! I should add, though, that since vinaigrettes are so simple, the quality of your ingredients really, really matters. Go get yourself the good stuff.

Below, I'm sharing two recipes to show you how to bring the vinaigrette together, but feel free to riff however you'd like. There no reason, for instance, you can't add mustard to the red wine vinaigrette, or shallots to the mustard version, and that's obviously just the start.

Adapted from the Culinary Institute of America, "The Professional Chef."

Makes 1 cup of vinaigrette, enough for dozens of salads

Basic Mustard Vinaigrette
This recipe uses mustard as a stabilizer and forms a much richer emulsion, nearly the same consistency as the mustard you start with. Adapted from the "Dean & Deluca Cookbook."

Makes ¼ cup vinaigrette, enough for 10-12 salads if you dress them very lightly, like me.