Her brother's admission that he molested her, and her family's restrained response, show the sad legacy of abuse 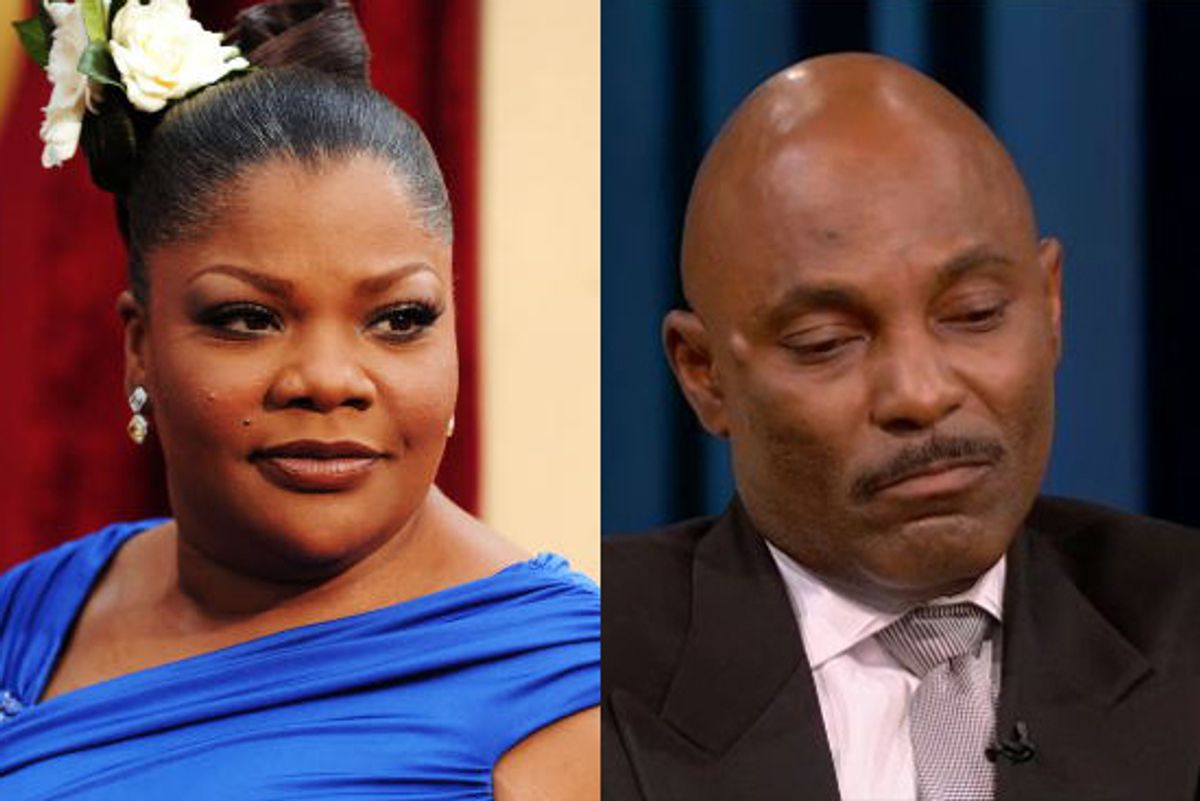 Mo'Nique and her brother, Gerald Imes
--

Where did Mo'Nique get the the inspiration for her nightmarish character in "Precious"? Speaking to Essence last year, she explained, "I was molested by my older brother. Even when I confronted him and told my parents, he said I was lying, and nothing was really done." But on Monday's "Oprah Winfrey Show," Gerald Imes minced no words. "I sexually assaulted my sister," he said, adding, "for that, I apologize and I'm humbly sorry." Though the episode didn't reach any easy conclusions about the actions of child molesters,  it did reveal how abuse within a family can happen -- and how it can devastate it for decades.

Imes didn't go deeply into the details of his motivations, which began when his sister was just 7 and he was in his early teens. He did, however, explain that he had begun using cocaine, heroin and alcohol at 11, after being abused himself. "I hid my own molestation and pain and guilt and shame because I thought it was my fault that these things happened to me," he said. But, he acknowledged, "the drugs weren't an excuse. They just … afforded me the opportunity to do the things … that I always wanted to do."

But in a situation that's not uncommon in abusive families, he says of Mo'Nique that "We still had a bond. We were still brother and sister. We still loved each other." Difficult and baffling as that is to hear, Imes' tale is a blunt reminder that sex abusers aren't always the creepy strangers lurking in doorways. In fact, they rarely are. It's those close relationships and bonds of trust that can make abuse go on for years -- making kids feel like participants in their own exploitation. As Winfrey, a vocal abuse survivor herself, said on her show last fall, "The people who are doing this are people you love. When somebody does it well, it feels good. And the mistake people make is thinking that if it feels good, you must have wanted it."

Imes was eventually convicted of molesting another girl and sentenced to 12 years in prison. Now he says that he hopes that "somewhere, somehow ... we can come back together as brother and sister and say: 'You know what? This happened. I'm sorry that it happened. I'm sorry that it happened to you, and that I was the perpetrator ... Now let's share this together and move on. Let's help someone else.'"

For her part, however, Mo'Nique doesn't seem interested. She declined to appear on the show, has no contact with Gerald and hasn't spoken with her parents in over two years. Monday's episode illuminated some of the reasons -- beyond just her brother's history -- the actress might have for keeping her distance. Sitting primly in the audience, her mother admitted, "This is something I felt should have been discussed first privately within the family," and that "Gerald has nothing to do with her reasoning for separating herself from the family." To which Oprah understatedly replied, "All of it's connected."

Mo'Nique's brother Steven also chimed in that "It really isn't what it looks like. It's blown out of proportion. After the molestation, Gerald and Mo'Nique resumed a brother and sister relationship. ... To come out today to say my brother did this and that's the last and only statement that society knows that this guy only and always been a 'monster' to her, is not true."

If I were Mo'Nique, I wouldn't keep that crew on my speed dial either. Anyone who says that being molested by your brother when you're 7 is the kind of thing that can possibly get blown out of proportion, ever, is not someone who might make the cut for Christmas newsletter. She has said in previous interviews that when she first told her parents about the abuse, "My father was very upset, but it never got mentioned again. I'll never forget my mother saying, 'If it's true, it will surface again,' and I remember thinking, Why would I lie? Why is there even an if in this?" In addition to being a sad example of the loneliness and helplessness of so many children who've been molested, Mo'Nique's story raises the question of accountability. If they'd believed their daughter, might the Imeses have spared another child from becoming Gerald's victim? Watching them on "Oprah" yesterday, it's clear that in so many ways, they still just don't get it.

While one might doubt the motives of a man who decides, after years of denial, that he suddenly wants to work it out with his Academy Award-winning little sis, it's possible that Imes is, in his way, working toward a greater good. Any time a man who has done unimaginable things can go on national television and say to anyone who might be in a similar dark place, "Get some help. Do it. Do it and do it now before you take yourself down a road that you may regret by not saying what's been bothering you," that's a positive thing. That's a rarity. Good for Oprah for giving him a chance to do it. And for families, Monday's show was a tough, frightening reminder of the power of denial, and that sex abusers can come in all guises. They're friends and teachers and relatives. And as harrowing as it is to consider, they can even be our own children.