Did the DNC use Google to sell socialism?

No, and GOP conspiracy theories about SEC collusion with Dems on Goldman just show they don't understand online ads 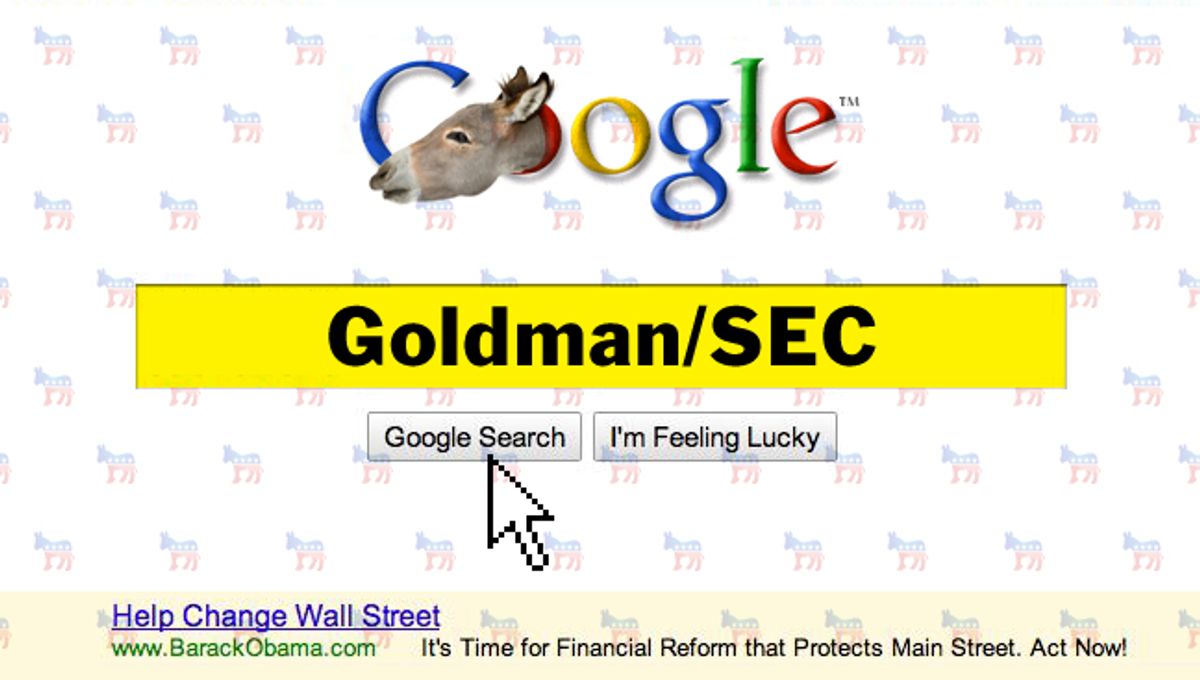 Hours after the Securities and Exchange Commission sued Goldman Sachs for fraud on Friday, a message from the Democratic National Committee on bank reform started popping up on a lot of Google search results pages. "Fight Wall Street Greed: Help Pres. Obama Reform Wall Street and Create Jobs. Families First!" an ad bought by the DNC said -- whenever someone searched for "Goldman Sachs SEC" in the world's most popular search engine.

A day later, when Politico reported on the DNC ad, Republicans started to get suspicious. How did that ad pop up so soon after the SEC -- which is supposed to be independent of the White House, let alone independent of the DNC -- filed the lawsuit? Before long, a full-blown conspiracy theory had blossomed. "It is pretty scary how the White House is using the full arms of the government, including quasi-independent government agencies, and outside interest groups to create bad guys with which to pass ever creeping socialist reforms that will continue to cripple innovation in this country," Erick Erickson wrote on RedState.

By Tuesday, eight Republican members of the House Oversight and Government Reform Committee were sufficiently riled up about the whole thing to send a letter to the SEC demanding information about whether there was illegal collusion going on. "The events of the past five days have fueled legitimate suspicion on the part of the American people that the Commission has attempted to assist the White House, the Democratic Party, and Congressional Democrats by timing the suit to coincide with the Senate’s consideration of financial regulatory legislation, or by providing Democrats with advance notice," read the letter, organized by Rep. Darrell Issa, R-Calif.

What the whole dustup really shows, though, is that either the GOP is being disingenuous, and just looking for a reason to attack the administration over the Goldman lawsuit, or Republicans don't understand how online advertising works.

The DNC ad was part of a campaign that started earlier in the week to push for the administration's bank reform bill -- which Republicans oppose. Officials tell Salon they had bought the ad against a slew of search terms. Last Thursday, for instance, was Tax Day; if you Googled for "TurboTax" to try to find some last-minute tax preparation software help, you would have seen the very same DNC ad about Wall Street reform.

Not long after the New York Times broke the news of the Goldman lawsuit, Google search traffic about the case started to skyrocket. You can monitor that sort of thing in something pretty close to real time, if you're interested in staying on top of what's happening online. And people who make their living with online ads -- either buying them or selling them -- tend to keep very close watch on what the popular searches on Google are, as part of a tactic known as search engine optimization, or SEO. (In fact, Salon's own SEO gurus alerted our staff that "SEC Goldman Sachs" was showing up in Google's list of hot topics by early Friday afternoon.) So the firm that was handling the DNC's online ad campaign added search terms like "Goldman Sachs SEC" to the already-existing buy. Within a few minutes, the DNC ad was in Google's rotation. No one at the DNC even knew, because their advertising firm has license to change search terms up for them to stay current.

In fact, that ability to buy search terms quickly and serve up ads  just when people are looking for information is one of the key selling points Google uses to convince political campaigns and groups to buy online ads. The DNC isn't anywhere near the only group that's advertising on searches related to Wall Street reform, either. The Chamber of Commerce -- which has poured tons of money into fighting the bank reforms -- has a big ad for its Stop the CFPA against setting up a new Consumer Financial Protection Agency running on a handful of Google searches, including "Wall Street reform," "bank reform" and "financial reform bill."

It only takes about 10 minutes to get a new search term added to existing buys. To prove that point, the DNC bought an ad Tuesday afternoon mocking the Washington Times, after a writer for the paper called to insist that it would have taken a full day to add the SEC search to the Democratic ad campaign. So if you Google the phrase "Washington Times purveyor of baseless Republican conspiracy theories," a link to Democrats.org appears at the top of the search results.

Republicans still think the whole thing is suspicious. "When you look at the chronology of all this, it's pretty remarkable," said Kurt Bardella, Issa's spokesman. Issa is expecting an answer from the SEC to his letter. But the only thing remarkable about it is that the Chamber of Commerce -- or Goldman Sachs -- didn't buy the same search term as the DNC did. (Goldman, though, turns out to have been quite busy snapping up ex-White House lawyers to help defend the lawsuit, which might explain why they were slow on the SEO uptake.)

Did the Goldman suit help give some political momentum to the bank reform efforts, as Republicans are alleging? Probably -- but only by underscoring just how rigged the current rules are. And given how unpopular Wall Street banks have been since they wrecked the economy two years ago -- making billions of dollars in profits and taking billions more dollars in federal handouts in the process -- it might make sense that the GOP would rather spin spooky stories about online advertising than talk about the substantive issues involved in the bank reform fight.

"They aren't very good with coming up with ideas that actually help people, but Republicans sure are great at coming up with the most ridiculous conspiracy theories," said DNC spokesman Hari Sevugan. "Republicans are demonstrating that they are more interested in excusing the irresponsible practices of big Wall Street banks than they are in ending them. Republican can continue to offer distractions on behalf of their Wall Street allies if they want to, but Democrats are going to stay focused on moving forward with reforms to end the abusive Wall Street practices that got us into this mess to begin with. We'll leave it to the American people to decide which approach they prefer."