And you don't have to be a snob to believe it 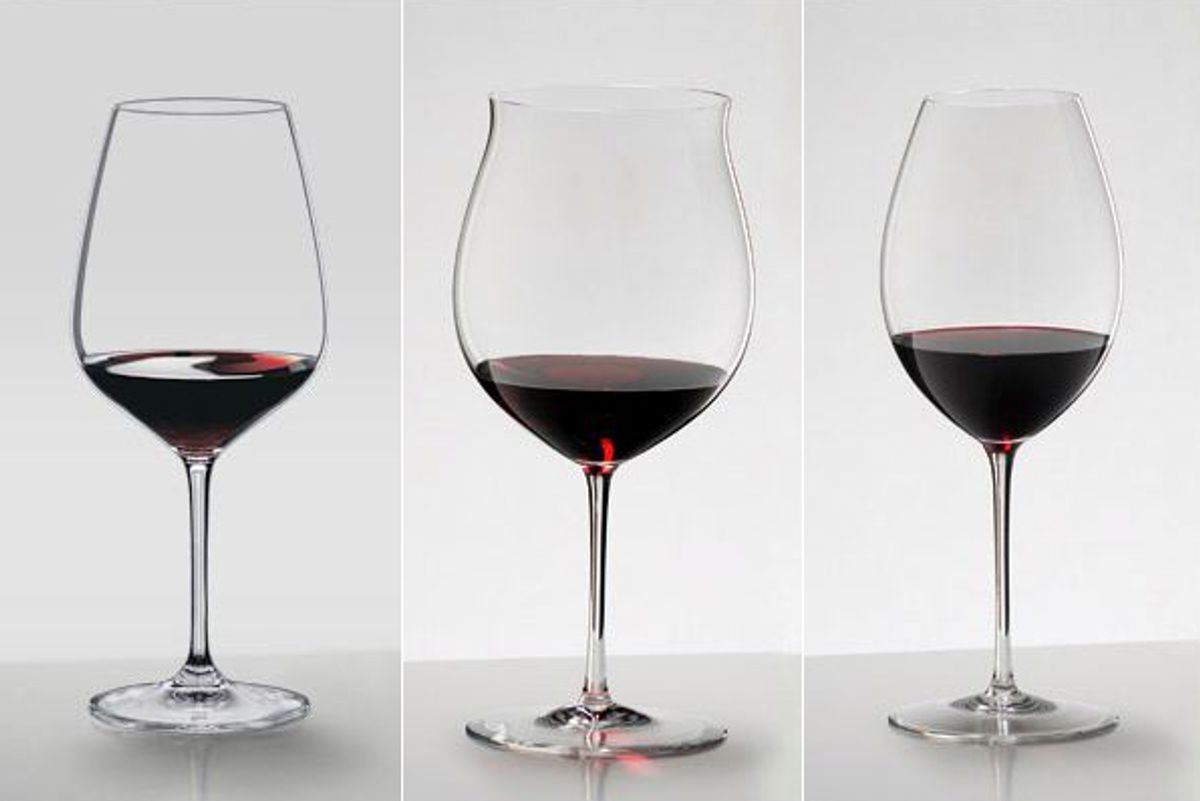 One of the happiest results of America's enthusiastic embrace of wine is that wine snobbery, thankfully, has all but disappeared in the United States. But there's a good wine’s worth of difference between snobbery and respect, and while I would never tell anyone what wine to enjoy -- and certainly never why he or she should not enjoy a particular wine -- I am not above gently recommending how to enhance enjoyment of wine. And one way is to drink from the right glass.

No, this is not going to be about those unbelievably expensive, hand-blown crystal wine glasses. (This isn't about snobbery; everybody, including me, hates a wine snob.) It’s just that good, affordable wine glasses make a huge difference in the enjoyment of wine. (You'll thank me later.)

Even among skeptics, you'll find little disagreement that there's a reason that white, red, and Champagne / sparkling wine glasses are different. The tall, thin flutes of the latter minimize the surface area of the wine exposed to the air, so those magical bubbles don't all float their way out of the wine too quickly. Red wine glasses tend to have big, flat bowls for the opposite reason; giving the wine more exposure to the air and letting it "breathe," allowing its rich, pent-up aromas to mix with air and develop in the glass. And white wines -- which rarely need to breathe as much as reds -- get glasses with narrower bowls that allow the wine to sit in a more compact shape, helping them keep cold longer.

So if we accept these general principals of wine glass design, it only follows that particular wine varietals (e.g., Chardonnay, Cabernet Sauvignon) can benefit from particular glasses designed to show off their character. For example, varying the shape of the rim -- more opened or closed -- will vary the degree the glass concentrates or dissipates aroma and bouquet, which is most of where the pleasure is. After all, we smell innumerable things and taste only five (sweet, sour, salty, bitter, and umami).

Speaking of taste, certain glasses are designed for wines to hit the parts of our palate that best highlight their characteristics. So a wine that's a bit sweet may fall from the glass to the more sour-sensitive edges of our palates to better balance its overall effect. To be fair, there is some controversy around this, as scientists have disputed the "taste zone map" that those designs are based on, and I confess that I am a bit flummoxed by these findings. I tend to agree with the new research, but then I do these wine glass trials and there is no doubt that the wine ends up on a different part of the tongue, and it directly impacts the way we experience the wine. Also, being aware of the position of your head in tasting the wine (your head goes way back when you use a small tasting glass, but is almost straight with the some of these varietal-designed glasses) begins to tell you something's up.

And in my daily life this holds true. Recently, I went to dinner at a good restaurant with several friends, and with the owner's permission, I brought several very special wines with me, which the service staff took care of in a highly professional manner. But then they brought the wine glasses to the table, and they were crap - thick balloons that made each white wine taste sour and each red taste bitter. All the wines suffered from a short "finish," the potentially lovely aftertaste that helps to define a great wine. I was bummed. These fine wines, served in crap glasses, tasted like crap. And crap wines did nothing to enhance the carefully prepared food, a lose/lose proposition for our table and the hard-working folks at the restaurant.

For days, I thought about the effect those glasses had. So I invited a couple of friends - Janet and Jerry - to join me for a blind tasting of wines served in different glasses. Jerry and Janet love wine and seemed intrigued, if a bit dubious, about the idea of matching a good wine to a good glass. I intentionally chose really good wines for the tasting, hoping to demonstrate that a great wine can taste like crap in a crap glass, and that the right glass will do that same wine organoleptic justice.

The two basic glasses for each wine were a) a jelly glass that sells for about $1 (more about this glass later), and b) a glass known as a "universal taster," (about $3 each) a small, five-ounce wine glass, resembling a style you might use for port or sherry, and used widely in large wine tastings; I use hundreds of these glasses for the tastings I conduct daily in the classes I teach at the Culinary Institute of America.

The other glasses, matched to the grape varietals to the wines we tasted, were all produced by Riedel. The Riedel family has been making glassware for 11 generations, and it was Georg Riedel (the 10th generation), who realized that he could shape glasses to optimize the appearance, aromatics, and taste of particular wines, so a glass meant for Cabernet Sauvignon looks completely different from one meant for Pinot Noir. (Riedel, based in Austria, also produces machine-made Spiegelau wine glasses in Germany.)

Not that long ago, Riedel glasses were only found at upscale specialty stores, and the glasses were aimed solely at wealthy and/or aspiring wine connoisseurs. As wine drinking in the United States (at least 40% of Riedel's worldwide market) has spread, Riedel made their glasses far more accessible, including a special line just for Target (the "Vivant" series; which sell for about $10 each). Riedel glasses, in all their forms, from the least to the most expensive, can be easily found online. Sold in sets, Riedel or Spiegelau glasses start at less than $10 per stem.

After an afternoon of tasting my friends marveled at how the finer, thinner glasses make the wine appear to "float" in the air, a beautiful effect, and it's no secret that we "taste" with our eyes as well as our palates. But perhaps more importantly, as we moved from jelly glasses to the tasters to varietal-specific glasses, we found increased complexity and balance in the flavors and aromas, and not at all in a subtle way. There was an incredible difference: great wines tasted like plonk in the jelly glasses, and magnificent in the ideal ones. (The complete tasting notes, including the wines and glasses used, are below.)

The difference can be so striking, in fact, that in the course of professional tastings led by Georg Riedel I've seen people refuse to believe that they were tasting the same wine in different glasses.

Can the right glass, properly engineered to maximize certain characteristics and minimize others, make a lousy wine taste good? I do think that a good glass can improve any wine, from the humble to the extraordinary. But there's a reason I chose the jelly glass for our tasting, even believing that they wouldn't do the wine any sensory justice.

Robert Mondavi, who probably did more for wine in the United States than any other person in history, conducted a tasting about 20 years ago at the Culinary Institute of America. I had the honor of helping to coordinate it with him, and Robert taught me a few things that day. First, at age 73, he didn't participate in the tasting. He told me his taste buds were shot, and he "didn't want to fake it." But he wanted to hear from the crowd of tasters, to listen to their opinions, and I understood the value of humility and learning from others in tasting, what is seemingly an internal exercise.

Robert was well-known for shipping hundreds, sometimes thousands of Riedel glasses in advance of any wine tasting he conducted. He explained to me that it was important to show his wines in the best possible light, including the best possible glass. I nodded and smiled, not fully realizing at the time just how correct, how smart he was in his thinking. But then he turned to me and, as an aside, offered me the other life-long lesson.

Robert Mondavi understood that wine, in the end, is always about more than just tasting notes and the senses. It's about sharing and generosity, which means it should never be about snobbery. He said, "Just remember, Steven, that great wines need great glasses. But if someone offers you a great wine, even if it's in a jelly glass, never say 'no.'" And I never have.

Robert died at the age of 94 in May of 2008, and I dedicate this article to his memory.

•Nose: closed, some oak, some fruit.

•Nose: More apricot, a bit of oak/not much, balance as the flavors come together.

•Nose: Oak emerges, but in balance with fruits.

•Taste/Finish: Emphasis on complexity and acidity, with oak tannins in the finish, a bit of pleasant bitterness; extremely long and complex finish.

•Appearance: Brownish, dull, brackish and muddy, no difference between rim of the wine and the center of the bowl.

•Nose: Smells like Manischewitz, nothing but grape and alcohol.

•Appearance: Medium black cherry, rim much darker than the center of the bowl.

•Opinion: The wine is beginning to strut its stuff.

•Appearance: Glass seems to disappear; rim of the wine goes to the sides of the glass, when looking down, you see the wine is still opaque; the wine can age quite a while.

•Nose: Overwhelmingly fragrant; roses, black currants, black cherries; as if the wine has been decanted for hours

•Opinion (in Janet's words): "I want to dive in and swim in this wine."

•Taste/Finish: Horrible – all tannin and alcohol.

•Opinion: I expect more - a lot more - from this wine.

•Appearance: Still dark in the center, but rim is much darker and "legs" (glycerol) dripping down the side of the glass are quite prominent.

•Opinion: A fine example of a wine that, over time, should become extraordinary.

•Appearance: Ink black in the center with an even darker rim.

•Opinion: Wow! What a difference. The wine seems to have achieved balance and tastes far more mature, and closer to ready to drink.

•Appearance: Similar to above; even more opaque; glass seems to disappear.

•Opinion: Tried this to see if there was much difference between Riedel "Flow" and Riedel "Vinum" (twice as expensive, but the same shape and size). Noticed the most difference in the appearance of the wine, as the "Vinum" is thinner, and the wine seems to "float" in mid-air.