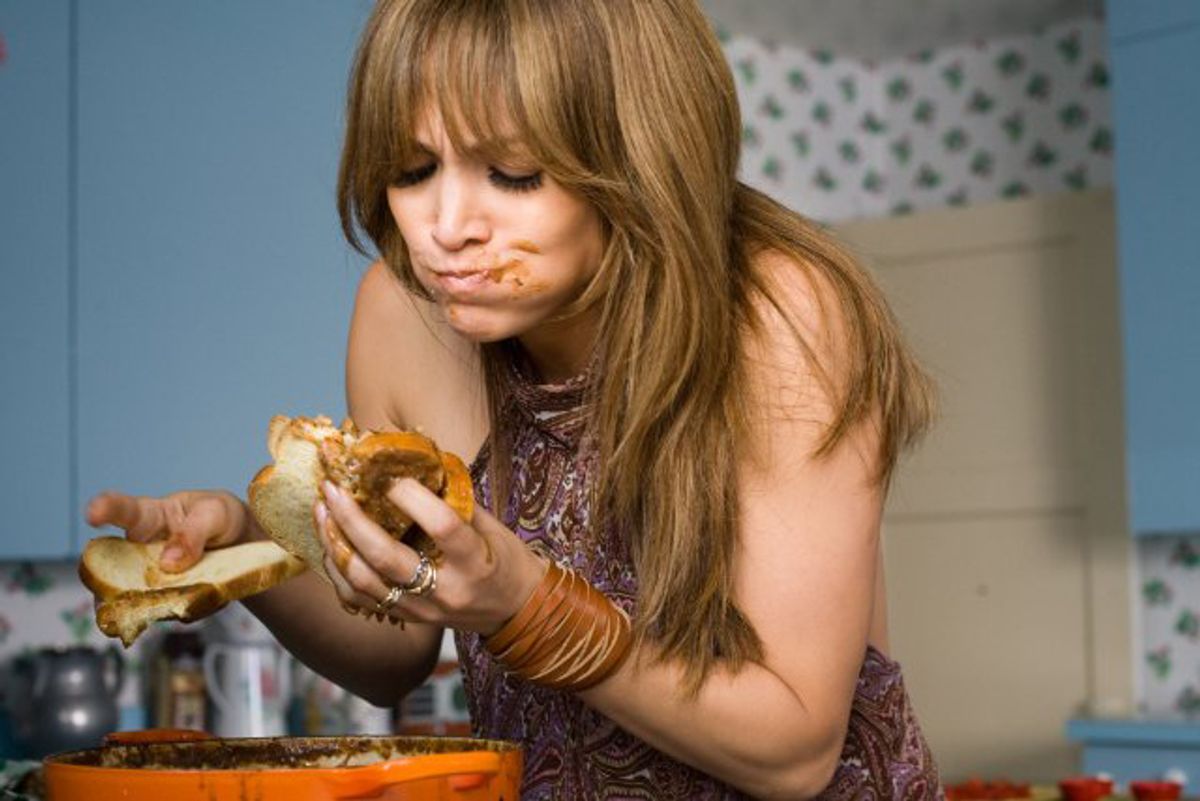 Scott Fitzgerald's maxim that there are no second acts in American lives has been proved wrong so often that it blazes out above the landscape in flaming letters of wrongness. Sometimes it seems that American lives are nothing but second acts: Getting wrecked, screwing the wrong people and going to jail is the process that ultimately makes us lovable.

Jennifer Lopez has avoided any such catastrophic meltdowns, as far as I know -- unless you're counting "Gigli," her misbegotten lesbian-mobster romance from 2003, and the botched betrothal to Ben Affleck whence it sprang. (That relationship might have counted, for both of them, as screwing the wrong people.) Actually, while "Gigli" is a very bad movie, it does not quite deserve its reputation among the most terrible ever made; as deluded pop-celebrity vehicles go, it's no "Glitter." But let us not grow distracted by that topic, alluring as it is. (We can discuss the relevance of Mariah Carey's second-act strategies some other time.)

Still, "Gigli" signaled that the curtain was beginning to fall on Lopez's first act, if you will. After that came "Shall We Dance" with Richard Gere, God help us, and then the alarming, inept "Monster-in-Law" with its muggy, mincing supporting performance from Jane Fonda (Satan help us!) and then Lopez's dismal attempts to reinvent herself as a dramatic actress in "An Unfinished Life" and "Bordertown."

By the time Lopez walked away from the limelight to focus on motherhood and her marriage to Marc Anthony, the limelight had already walked away from her. In retrospect, her tenure as world-dominating movie star and pop star -- and possessor of the most celebrated derrière since Aphrodite Kallipygos -- was less than half a decade, from "Out of Sight" in 1998 through "Maid in Manhattan" in 2002.

So here we have a woman who is tremendously rich and famous, able to command her own business ventures and control her own destiny to a significant degree, yet who is still in search of a second act as a pop celebrity. That's a dangerous game for a female performer approaching middle age to play (Lopez will turn 41 in July), especially when she's trying to swim upstream against the most vicious currents of Hollywood sexism, and double-especially when her star appeal in the first place was built on evanescent qualities like beauty and charm.

If Lopez insists on using her financial muscle and production powers to shove her way back into leading-lady roles on the big screen, that can only mean more tepid embarrassments like "The Back-up Plan," one of the most unintentionally apposite titles in movie history. What remains of Jenny From the Block's one-time hotness is her easygoing, everygirl persona and a modest comic gift; at this point, her real backup plan should be a TV sitcom (as a recent EW article on her career plight suggested).

Instead, we get a dispiriting and thoroughly ineffective romantic comedy, with some juicy morsels provided around the edges by a great supporting cast but no heat whatever in the central coupling between Lopez and Aussie TV hunk Alex O'Loughlin (a vampire in "Moonlight" and a doctor in "Three Rivers"). Zoe (Lopez), a Manhattan pet-store proprietor -- why do the single women in romantic comedies always own pet stores? Is it psychological shorthand for how lovelorn and nurturing they are? Or is it just to provide cute animal reaction shots? -- meets Stan (O'Loughlin), a bad-boy cheesemaker, in a rainy-day taxi dispute right after she's been inseminated by wisecracking OB/GYN Robert Klein.

As scripted by TV veteran Kate Angelo, Stan and Zoe's fateful meeting is supposed to be screwball-awkward but instead comes off as skin-crawlingly uncomfortable, and despite the entirely conventional demands of the plot, the duo never seem remotely at ease with each other. When Stan announces that he's sticking around even after learning that Zoe's pregnant with twins who were literally fathered by a red-headed stranger, it seems willful and bizarre rather than noble and romantic, as if maybe he's the one with compulsive baby-lust.

Speaking of weird and uncomfortable, at about the two-thirds mark in their predictable on-again, off-again romance, Zoe tells Stan: "I miss my old ass. It was like my new ass, but way hotter." They discuss this subject for another minute or two, while Zoe fetishistically clutches an underwater photo of her in a bathing suit, taken "by her college boyfriend," in which she's visible only from the neck down.

What is that, a wild stab at self-deprecating humor? A collective dive into a Freudian black hole? Not only does this movie's star look like a leaner, bionically altered version of herself, but the filmmakers call attention to that fact -- and symbolically decapitate her at the same time? Now, nobody held a gun to Lopez's head and forced her to play that scene, but you have to wonder what she thought she was doing, and what kind of advice she's getting.

Since you bring it up, Zoe, let's talk about the old ass and the new one. There's no nice or polite or even entirely acceptable way to say this, but Lopez looks kind of strange in this movie. She's been gym-toned and bronzed and highlighted and frosted and layered and processed and accessorized and hidden in drapey dresses and buried under a somewhat doggy Farrah Fawcett 'do. You can see J.Lo in there, or someone who looks like her, from time to time, but she can't come out and play. In close-up, Lopez's enormous false eyelashes cast their own shadows on the set; they threaten to reach out and entwine you, like those plant-tendril 3-D thingies in "Avatar." She is indeed less curvaceous than she once was, and she has a sort of mysterious, hardened sheen, like a cupcake left too long in the Easy-Bake Oven.

Listen, I understand that Lopez's struggle to play a romantic leading role opposite an actor who is seven years younger, and my reaction to it, reflect a culture of pernicious sexism that judges women and men by different standards. Of course the age difference between Stan and Zoe shouldn't matter, but you can't make the issue disappear by pretending it doesn't exist. A better version of "The Back-up Plan" might have used it as a comic plot point (it's briefly hinted at) or evaded it by casting a man who wasn't self-evidently younger. Casting a man who actually appeared to be attracted to Lopez might have been a good idea too.

More to the point, in some hypothetical good version of this movie Jennifer Lopez wouldn't have been so desperately repackaged in a wistful, pseudo-Proustian effort to recapture the lost magic of, say, "The Wedding Planner." (Yes, that's a ridiculous phrase to think or type, but there you are.) Even amid the notorious sexism of showbiz, there are more opportunities than ever for women to be sexy, gorgeous, charismatic, etc., into and beyond the years of motherhood, maturity and menopause. I believe Jenny can pull it off too -- but not by sitting around mourning the lost ass of yesteryear.

As for "The Back-up Plan," the reasons to see it are all about hilarious bits by Michaela Watkins as Zoe's borderline-intolerable loudmouth best friend, Anthony Anderson as a playground dad dispensing dire words of wisdom to Stan, and Maribeth Monroe as a member of Zoe's support group who gives birth in a kiddie wading pool, hooting and grunting like a warthog possessed by the Wendigo. In fact, toward the end of the film Angelo and director Alan Poul sneak in a pretty funny 20-minute spoof on New Age childbirth culture and the hazards of having twins (an experience Lopez and I have in common). Zoe, Stan and the headless woman in the bathing-suit photo are reduced to bystanders, and it works better that way.