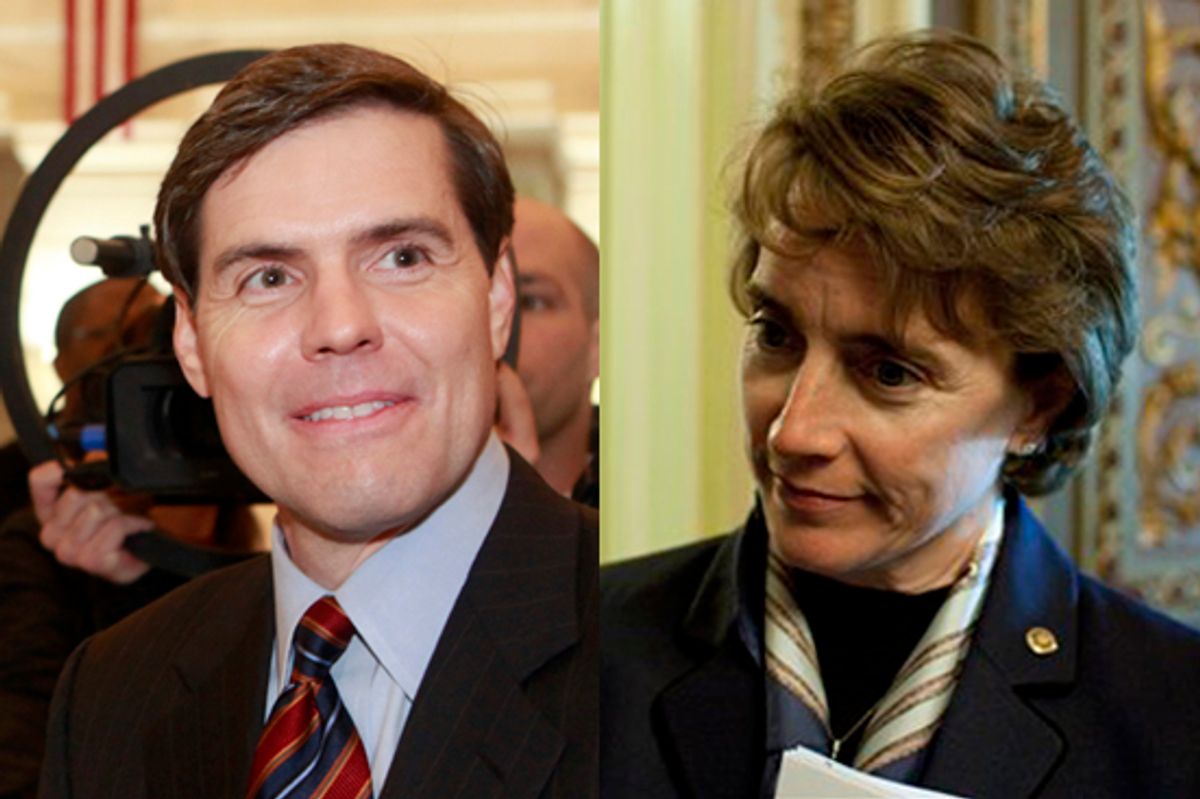 The first two debates in the Arkansas Senate Democratic primary come back to back this weekend, Friday night and Saturday afternoon, and the stakes are high for both Sen. Blanche Lincoln, the incumbent, and Lieutenant Gov. Bill Halter, who's trying to defeat her.

Polls show Lincoln has maintained a decent lead over Halter, even though he got into the race with a splash of national attention. Progressive groups from outside Arkansas, and labor unions in the state, backed him immediately; Lincoln has won a reputation among many national Democrats for breaking with the party on key votes, and the primary was seen as a chance to take revenge.

Now the weekend's debates could give Lincoln a chance to consolidate her lead -- or Halter a chance to undo it. Between 10 and 20 percent of voters are still undecided, surveys show, and that doesn't necessarily bode well for an incumbent of 14 years.

"The polls are frustrating, the results disparate, but she does seem to have a relatively healthy lead," says Janine Parry, a political science professor and director of the Arkansas Poll at the University of Arkansas in Fayetteville.

Halter tried to put Lincoln on the defensive this week over Goldman Sachs, after the firm was sued by federal regulators for securities fraud. Lincoln has taken more than $30,000 in campaign contributions from Goldman or its employees since 2002, and $4,500 this cycle. She canceled a fundraiser at the bank's New York headquarters that was supposed to be held Monday, but so far, despite Halter's protests, she hasn't returned the contributions.

And in fact, Lincoln aides feel pretty good about Wall Street heading into the debates. This week, Lincoln pushed a bill through the Senate Agriculture Committee, which she chairs, to regulate derivatives -- precisely the kind of financial instruments that got Goldman in trouble. "It is widely hailed as the best bill to make Wall Street accountable, but Bill won't say if he would vote for Sen. Lincoln's 'Wall Street Accountability and Transparency Act,'" a memo from Lincoln campaign manager Steve Patterson to reporters said.

Halter's camp isn't too impressed. "It's a very Washington thing, to be excited about cleaning up your own mess," says Halter spokeswoman Laura Chapin. "Senator Lincoln had jurisdiction over derivatives for years and did nothing. The warning signs were there."

But the Wall Street stuff may have given Lincoln the hook she needed to try to pivot into populism. Halter had been attacking her for being on the side of big banks and big business, but now her campaign is playing up the money Halter made working for tech firms after he left the Clinton administration. And Lincoln, after the debates, will be back in Washington just in time for the bank reform bill to hit the Senate floor.

"The strong, populist shift on derivatives is the rare double-win: placates Arkansas liberals in the primary who, as frustrated as they may be with her, just aren't that turned on by Halter; but it also gives her a solid plank in the general," says Parry. "In Arkansas... you want to be on the 'people' side of big banks and East Coast moneybags. She just staked out that territory all to herself and emphasized her role on Ag to boot. How 'bout 'dem apples?"

You can watch Friday night's debate on C-SPAN or on Little Rock's KATV Channel 7 at 8 p.m. eastern. A third candidate, who trails both Lincoln and Halter in the polls by a wide margin, D.C. Morrison, will also participate.