The bankrupt, born-again actor will accept your money for a good cause -- himself 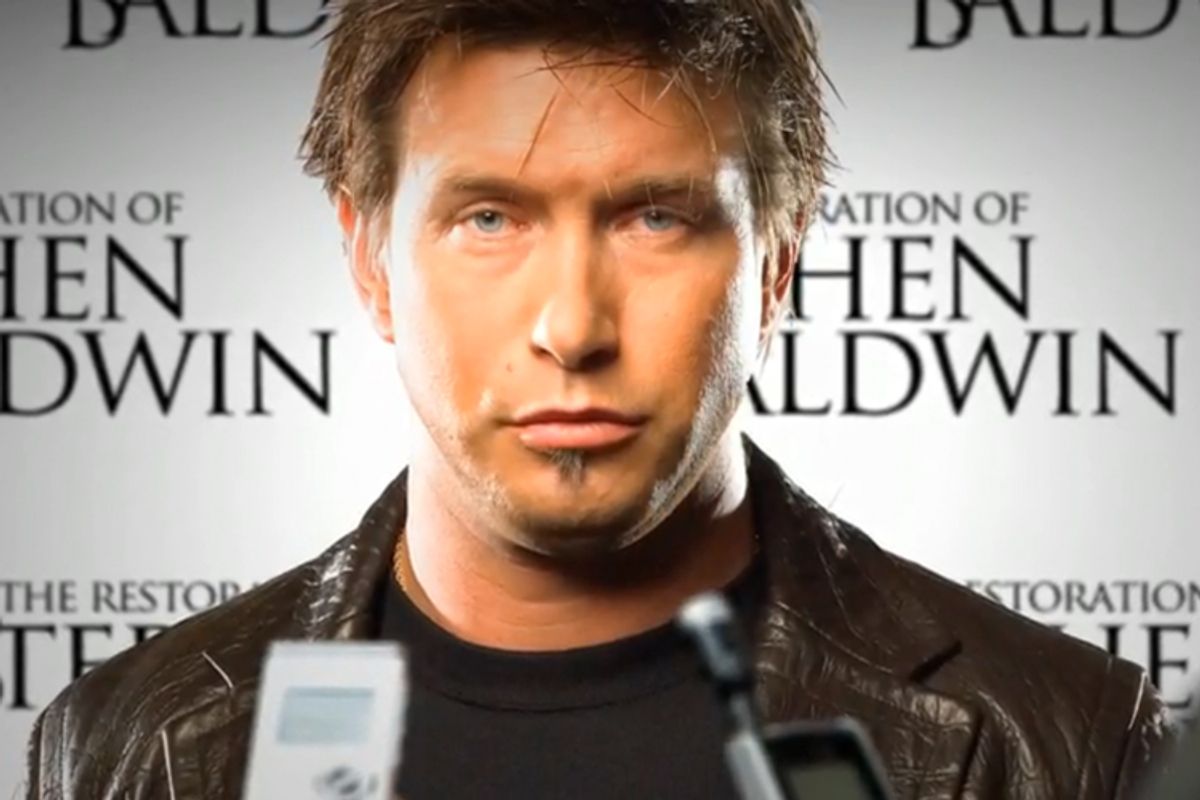 We always suspected that if we just lived long enough, Stephen Baldwin would appear in something entertaining again. World, that day has come. The born-again, bankrupt actor who's made a career of distinguishing himself as nutty even by Baldwin brother standards is now appearing in "The Restoration of Stephen Baldwin," wherein the star of "Slap Shot 2: Breaking the Ice" is accepting your donations so he can get his shit together and glorify the Lord. You know, like that other put-upon hero, Job.

It's true -- the resemblances between the two men are eerie.

In the site's epic promotional video, it's explained, "Job was the most influential man in the east." Stephen Baldwin was the eighth most influential contestant on "I'm a Celebrity, Get Me Out of Here." But the parallels don’t end there! Stephen Baldwin has given his life to Jesus -- just like Job would have done if he didn't predate the Christian era. Job made burnt offerings to the Lord. Baldwin baptized Spencer Pratt. Job was covered in boils and open running sores. Baldwin has endured people on the Internet saying mean things, like "He's such a loser." And just like Job -- and also Dan Aykroyd in "Trading Places" -- Stephen Baldwin has fallen on hard financial times. Apparently, God has been wagering with Satan again.

And so the creators of "The Restoration" ask for "the massive restoration of a Christian public figure," pondering, "What if 10 percent of the 159 million Christians in America gave a Token Gift? What if 10 percent of the worlds two billion Christians gave a token gift?" Why, he'd have a really nice house in no time, that's what. Sure, you could give your money to Doctors Without Borders, maybe help some earthquake victims in Haiti or Chile or China. Or you could "be part of a historic movement of God that will literally rock the nation." Literally!

Baldwin himself has been strangely silent about the site, which has been soliciting donations since last fall and generously says that "he deserves hundreds of millions for his Job-like faithfulness in the face of relentless loss and persecution." It was however launched "with the permission" of Daniel Southern, the president of Stephen's ministry.

You can't blame a guy for being open to accepting a little charity -- it's doubtful the man who co-starred in "The Flintstones in Viva Rock Vegas" is suffering from an excess of pride. And if there's a human on the planet who wants to separate himself from his money in the name of Stephen Baldwin, that's a miracle to impress even the Insane Clown Posse. We just feel the need to make one thing clear: When the folks at "Restoration" say that "People not only mock Stephen, but mock God as well," we're not mocking God. We're just mocking Stephen.