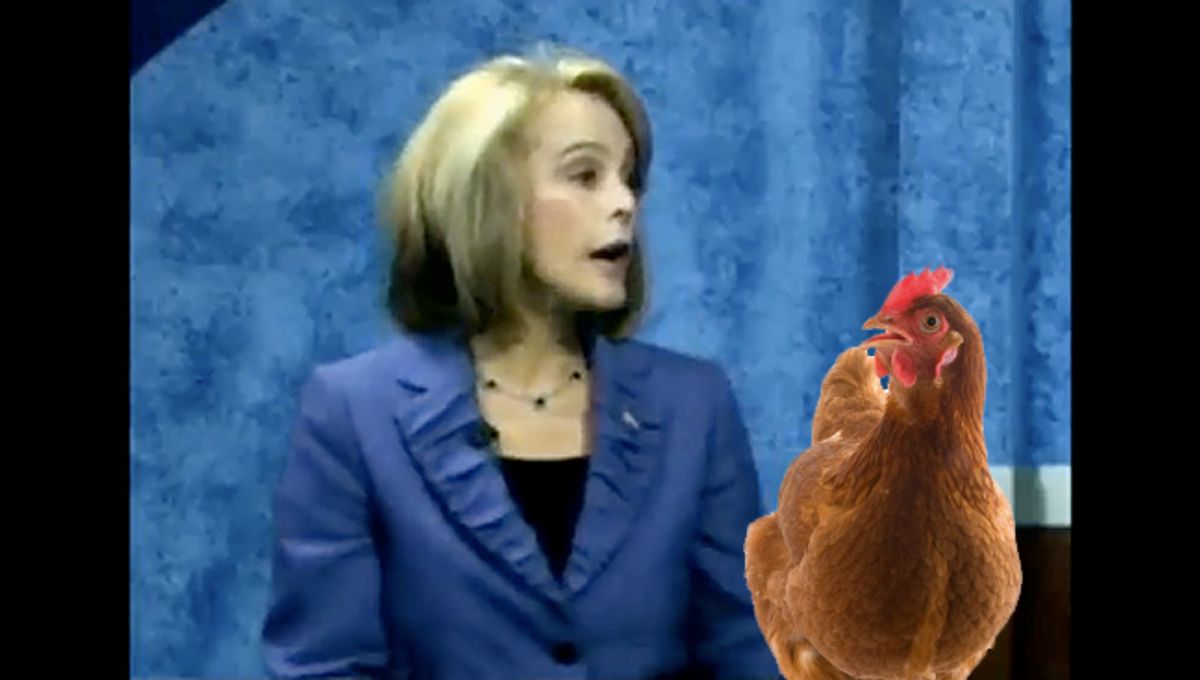 In politics, as in life, you can have good weeks, and you can have bad weeks. It's fair to say that Sue Lowden didn't have a particularly good week.

The frontrunner in the Republican primary to take on Senate Majority Leader Harry Reid, D-Nev., Lowden offered an interesting take on the vexing question of how to pay for healthcare on Monday: barter for it. With chickens. "I'm telling you that this works," she said on a Nevada TV show. "You know, before we all started having health care, in the olden days our grandparents, they would bring a chicken to the doctor, they would say I’ll paint your house. I mean, that’s the old days of what people would do to get health care with your doctors."

Lowden had been well ahead of her closest GOP rivals, Danny Tarkanian (son of the UNLV coaching legend) and Sharron Angle. And a brief robo-calling poll conducted later in the week showed she was still ahead. The chicken nonsense, though, got Democrats excited; Reid has trailed all three challengers in the polls for months, so any self-inflicted Republican wound cheers them up.

But it doesn't seem Nevada Republicans are panicking about the barter comments. I just spoke to Las Vegas-based GOP consultant Steve Wark, a former chairman of the Nevada Republican Party, about the race. Wark is doing some work for Tarkanian, but even so, he says Lowden can recover. "Republicans, in general, they feel comfortable that any of the three candidates could beat Harry Reid," Wark said. The chicken-bartering got some buzz in Nevada political circles, but didn't cause any great angst among the GOP: "A lot of folks thought it was kind of funny and are kind of shaking their heads."

Lowden's bigger problem, at least in the primary, could be Ron Paul, not chickens. His supporters in Nevada are still fuming that the state GOP convention shut down in 2008 when it became clear the libertarian hero could win more delegates than John McCain. At the time, Lowden was the party chairwoman.

Reid's supporters, meanwhile, are still banking on math to bail them out (like so many people who go to Vegas hoping against hope). There will be, besides Reid and whichever Republican emerges from the primary, another handful of candidates on the ballot -- a libertarian, an "Independent American," a self-proclaimed Tea Party candidate who isn't actually endorsed by the Tea Party -- and who many Nevada Republicans suspect is a secret Reid plant -- and a "none of the above" option. (The Tea Party candidate, Scott Ashjian, looks like he won't be in jail for the election on bad check charges, which had some Democrats breathing sighs of relief this week.) Which means there's any number of ways to vote against Reid, without actually voting for a Republican who might be able to beat him. Reid's unfavorable ratings have been above 50 percent for a while, and there may be quite a few voters who want to register their dismay with him. But if each of those other options manages to pick up 1 or 2 percent, Reid might be able to squeak through with support of less than 50 percent of the electorate.

That didn't worry Wark much, either. "You can put good money on the fact that there's no possible way he could win," he says.