Lindsay Lohan's slow meltdown: It's all about Dad 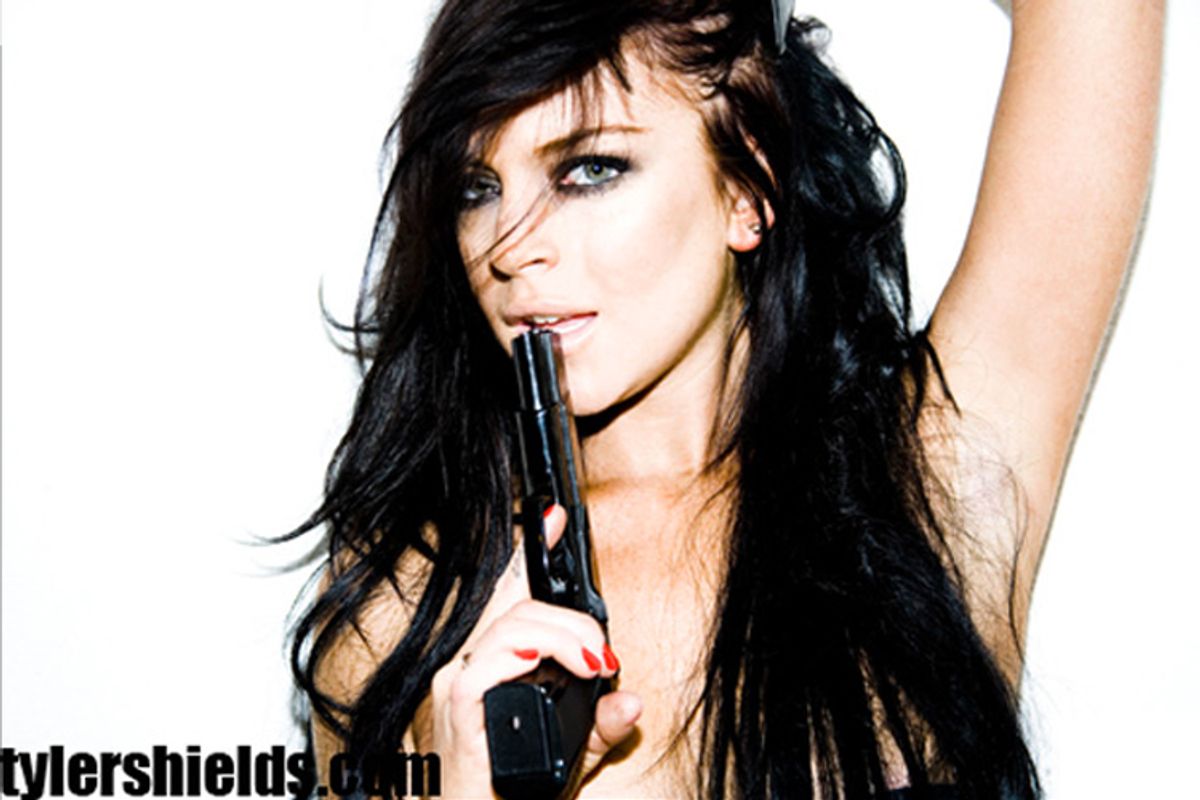 How much longer can the slow-motion train wreck that is Lindsay Lohan keep going? Lohan, a young woman whose main fame these days seems to arise from her Twitter feuds, has finally managed to chip away almost every other aspect of her persona -- once promising actress, sexy starlet, aspiring singer -- to assume the mantle of America's most shining example of father-daughter dysfunction.

Many of us who had shitty dads -- and folks, we are legion -- can't help feeling a little heartsick watching Lohan take that deep, instantly recognizable anguish and act it out on such an epic scale. Because while lots of us have baggage, few have made a music video called "Confessions of a Broken Heart" about it. Or tweeted about being "kidnapped" by a "crazy" person. Lohan's most recent publicity stunt/cry for help came earlier this week, via an eyebrow-raising photo shoot for Tyler Shields that features the actress cavorting in underwear against a bloodstained backdrop, brandishing a gun, and posing with her stilettoed feet far above her pretty head. And just in case you might somehow accidentally not see that last provocative image everywhere, it's now Lohan's Twitter page background.

It's generally assumed that mothers are the No. 1 cause of screwed-up behavior. Thanks, Freud! And judging from her public persona, it's unlikely Dina Lohan is the cream of the maternal crop. Shoddy fathers, similarly, take many forms -- I'll take my absent, indifferent one over an abusive one any day. But the Lohan family drama is, more than anything, a potent and painful example of what can happen to girls without good men in their lives. Michael Lohan, whose most recent stunt was to call police to Lindsay's home for a "welfare check" on her sister Ali, seems to take crappy parenting to a level others can only aspire to. It is any wonder his daughter is appearing in guns and blood photo shoots?

Of course, it's possible to grow up with a less than stellar father and still remember to wear underpants and not drive off the sidewalk. You might wind up an Oscar-winning actress  or the president of the United States. And there are probably all sorts of other reasons Lohan, who refers to Michael as her "ex"-father, is the hot mess she is today. She may not have been dealt a bumper crop of mentally healthy, substance-abuse-resistant genes from the get-go. She had wealth, notoriety and beauty when most kids her age were picking pimples in public school.

But the thing Lohan herself seems to keep circling back to is her dad. Despite her ongoing insistence that she wants no part of Michael, she seems incapable of suspending their very public dialogue. Oh, Michael Lohan, you compulsively Twittering, limelight-hogging ex-con, you, what have you done? Dogged by paparazzi, scrutinized at every turn, your daughter is far from being in the optimum place to work out the considerable issues you seem to be making your life's work to shove on her. Instead, you keep bringing it, fuck-up-style – tweeting to Lindsay (whose famous face graces your Twitter page) that "Ur junkie assistant is causing a lot of problems for you." Yeaaaah, it's her assistant who's a problem.

That's why, awful as the whole shabby spectacle is, we keep watching. We know that girl. We've been that girl. I think of my own daughters, how lucky they are to have a devoted dad who adores them, and how much harder the road was for me because I didn't. And I look at the image from her recent photo shoot -- the one of Lohan with a gun aimed squarely between her vacant eyes -- and think how many of us understand, that's exactly what it's like when your parent bombs out. You're vulnerable and numb at the same time. You feel everything -- and nothing. As a friend whose own father was a manipulative, alcoholic jerk says, "You know how much I've acted out – and I'm not even rich and famous."

Lohan is a grown woman and responsible for making her own way in life now. Yet the actress, who was recently drop-kicked from the cast of "The Other Side" for allegedly not being "bankable" and may be headed to the slammer for violating her DUI parole, still managed to take time from her roster of personal disasters to tell reporters this week, "No one should ever have to worry about their father saying those things publicly against them." It's not impossible she might just evolve into an amazing, powerful woman. Drew Barrymore, another wild child whose father was no prize, managed to turn her life around while still in her early 20s, and it's precisely that rough patch that seems to have deepened her subsequent work.

Having a bad dad is like being born with a missing limb. It doesn’t have to handicap you, but it will always define you. It makes you keep reaching for that phantom, even when you know there's nothing there. So if you ever need a reminder of the power of a man in a girl's life, if you question whether or not fathers matter, take a good look at the girl with the gun to her head. Because she's everywhere.