"A Nightmare on Elm Street": Wake me when it's over 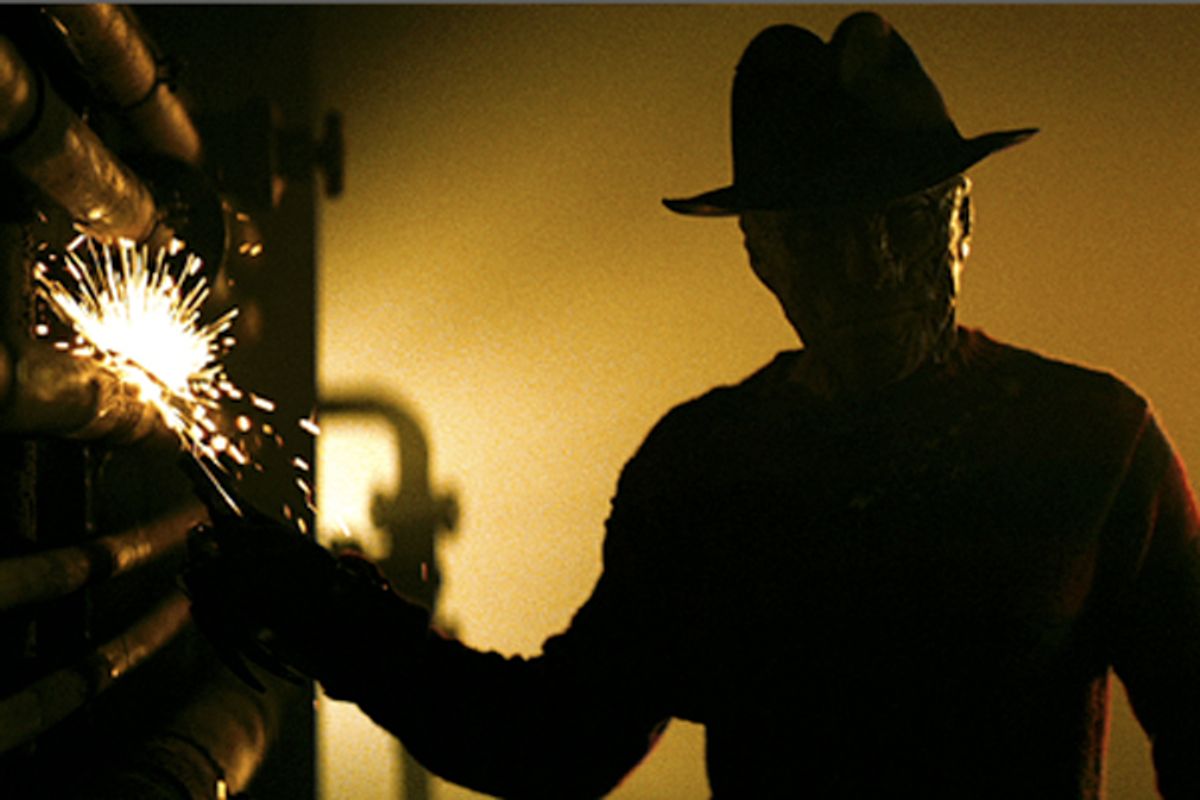 A still from "A Nightmare on Elm Street."
--

When Wes Craven's original "A Nightmare on Elm Street" hit the screen in 1984, America was midway through the collective dream-state of the Reagan years, an era that promised to slam the door shut on the social traumas of the '60s and paper it over with a veneer of "Father Knows Best" suburban normalcy. It was morning in America -- but there was some mighty weird shit going on at night.

Craven's antiheroic Freddy Krueger appeared on the landscape, in that era of missing kids on milk cartons and largely mythical ritual-child-abuse scandals, as a visible manifestation of all the suppressed secrets and lies that weren't quite deeply buried enough in the dripping, steamy basement. He was a child-killer, freed on a technicality and then hunted down and murdered by the vigilante parents of Springwood, Ohio, who then resurfaced as a murderous, lascivious emissary from the id, in a remarkably ugly sweater. (Craven reportedly read somewhere that that particular red-green combination was uniquely unpleasant to the human eye.)

Along with John Carpenter's "Halloween," "Nightmare" reinvigorated horror cinema and launched the teen-oriented, slasher-movie craze of the '80s and early '90s. That's a mixed blessing, to be sure, but "Nightmare on Elm Street" was also "The Matrix" before "The Matrix" was, dynamiting conventional screen distinctions between dream, reality and psychosis. In the original "Nightmare" and some of its better sequels -- I'd nominate "Nightmare 3: Dream Warriors," "Nightmare 4: The Dream Master" and "Wes Craven's New Nightmare," the most metafictional pop film this side of Charlie Kaufman -- production design veered into the Gothic, the grotesque and the surreal.

As the franchise munched its way into jokey, Grand Guignol decadence over the course of eight feature films and a TV series, Robert Englund's smirky, wiseass Freddy became first a cultural icon and then, more and more obviously, the damaged, hubristic hero of the whole enterprise. Teenagers in horror films are endlessly replaceable; there can be only one Freddy Krueger. His back story became increasingly complicated: He has a mother (a nun -- raped by 100 maniacs!), an abusive stepfather, an ex-wife and a daughter. He began to sound like the deadbeat-dad protagonist of Bruce Springsteen's "Hungry Heart," except with a grant of eternal life from the Dream Demons and a sweater badly in need of dry cleaning.

Craven tried his best to kill Freddy off and demolish the franchise down to its foundations by making "New Nightmare," which starred Englund, Craven, New Line Cinema head Bob Shaye and Heather Langenkamp (who played Freddy's nemesis Nancy in the first and third films) as themselves, haunted by a fictional demon their movies had called to life. Of course it wasn't enough, and New Line convinced Englund to don the moldy stripes one last time, for Ronny Yu's 2003 "Freddy vs. Jason," which became, depressingly enough, the highest-grossing movie in the history of both the "Nightmare" and "Friday the 13th" franchises.

I guess, in the wake of all that, you can see the appeal of trying to strip away all the one-line gags and Halloween costumes and Hieronymus Bosch-knockoff imagery and postmodern layers of meaning, and bring the series back to its roots among the insomniac teens and lying parents of an idyllic, lily-white Midwestern town. Or actually, come to think of it, maybe you can't.

That brings us to the handsome, studious new remake of "A Nightmare on Elm Street," made with zero input from either Craven or Englund, on which Michael Bay's production company clearly means to launch a new franchise. I sat through the whole movie with a Manhattan preview audience who liked it well enough, and I can tell you about certain technical things that were good and bad in it. But I can't for the life of me tell you why it exists.

Oh, OK -- I'm being facetious, in a way. It exists because there's good money in selling scary movies to teenage and early-20s audiences, and as Michael Bay knows well, the best money lies in selling them stuff they already know about. His company also relaunched the "Friday the 13th" series last year on a similar premise -- why have a new idea when you can just take an old one and make it louder and stupider? -- and I will tell you this: Compared to that film, the "Nightmare" remake is the second coming of Stanley Kubrick.

As directed by Samuel Bayer, a veteran of TV commercials and music videos (including the one for "Smells Like Teen Spirit," implausibly enough), "A Nightmare on Elm Street" has various qualities, some of them surprising and not all of them bad. It begins with a memorably creepy scene in an empty 24-hour diner, which briefly suggests that the Freddy Krueger saga is going in a new, more psychiatric direction. (It isn't.) It offers a cast of beautiful young faces, often seen in extreme close-up, most notably Rooney Mara as an updated, faintly Goth version of Heather Langenkamp's Nancy, and Kyle Gallner as Quentin, her pretty-boy sidekick in a Joy Division T-shirt. In an effort to break free of horror-movie cliché, Bayer and cinematographer Jeff Cutter deliver a lustrous, honey-shadowed visual style, reminiscent of an expensive prime-time soap. There are some nice digital effects, which were of course totally unavailable in the latex-and-fake-blood era of the earlier films.

But what's so bad about latex and fake blood? Technical proficiency and great cheekbones can get you only so far, especially when it looks as if nobody involved with this "Nightmare" either A) had any fun at any time, or B) expended so much as a single brain cell on the question of what made the original material resonant and how to recapture that. This moody, lifeless movie rips off lines, scenes, dream sequences and character kills from Craven's film -- Freddy coming through the wallpaper or rising through the bathtub; Freddy saying "I'm your boyfriend now!" or "How's that for a wet dream?" -- while draining them of energy, suspense and meaning.

The credits say that Wesley Strick and Eric Heisserer's screenplay is "based on characters created by Wes Craven," but that's simultaneously way too much and not nearly enough. Craven should sue these guys for stealing his material lock, stock and barrel, and then sue them again to get his name off the picture. Beyond the introduction of Facebook, pharmaceuticals and cellphones -- and the fact that Springwood seems vastly more affluent than it was 26 years ago -- very few alterations have been made to the basic narrative, which at least spares me from boring you with a plot summary. There's these kids in this town, see, and they're having these weird dreams! About this dude -- and you'll never guess what he's got on his fingers!

You will notice, if you are paying attention, that I have not yet mentioned the name of Jackie Earle Haley, who plays Freddy Krueger in this movie. (Is nothing sacred? Nothing? Wait, don't answer that.) So I will say it now. Haley is an interesting fellow, an Academy Award nominee who tries to invest the character with a combination of bulldog-fireplug tenacity and pseudo-Shakespearean villainous darkness. He growls and skulks, his face covered in an enormous waxy prosthesis. If Englund's mock-erudite Freddy was arguably too delighted with himself all the time, Haley's Freddy is no fun at all, a depressed, sadistic and sour little bastard.

It isn't Haley's fault that this movie has altered Freddy's origin story in a way I can't explain to you right now -- a way that makes the character seem both meaner and much smaller -- or that it completely fumbles the issue of Springwood's parents and their collective guilt. But for all the filmmakers' talk about reinvigorating the franchise for a new generation, and all their attention to technical details, this is a sloppily conceived remake with no passion for the genre or this story behind it, a movie that assumes its audience is brain-dead and likes it that way. Does Craven's "Nightmare" hold up as a great movie, or even a good one, a generation later? I'm not sure about that. But at least he wanted to wake us up.